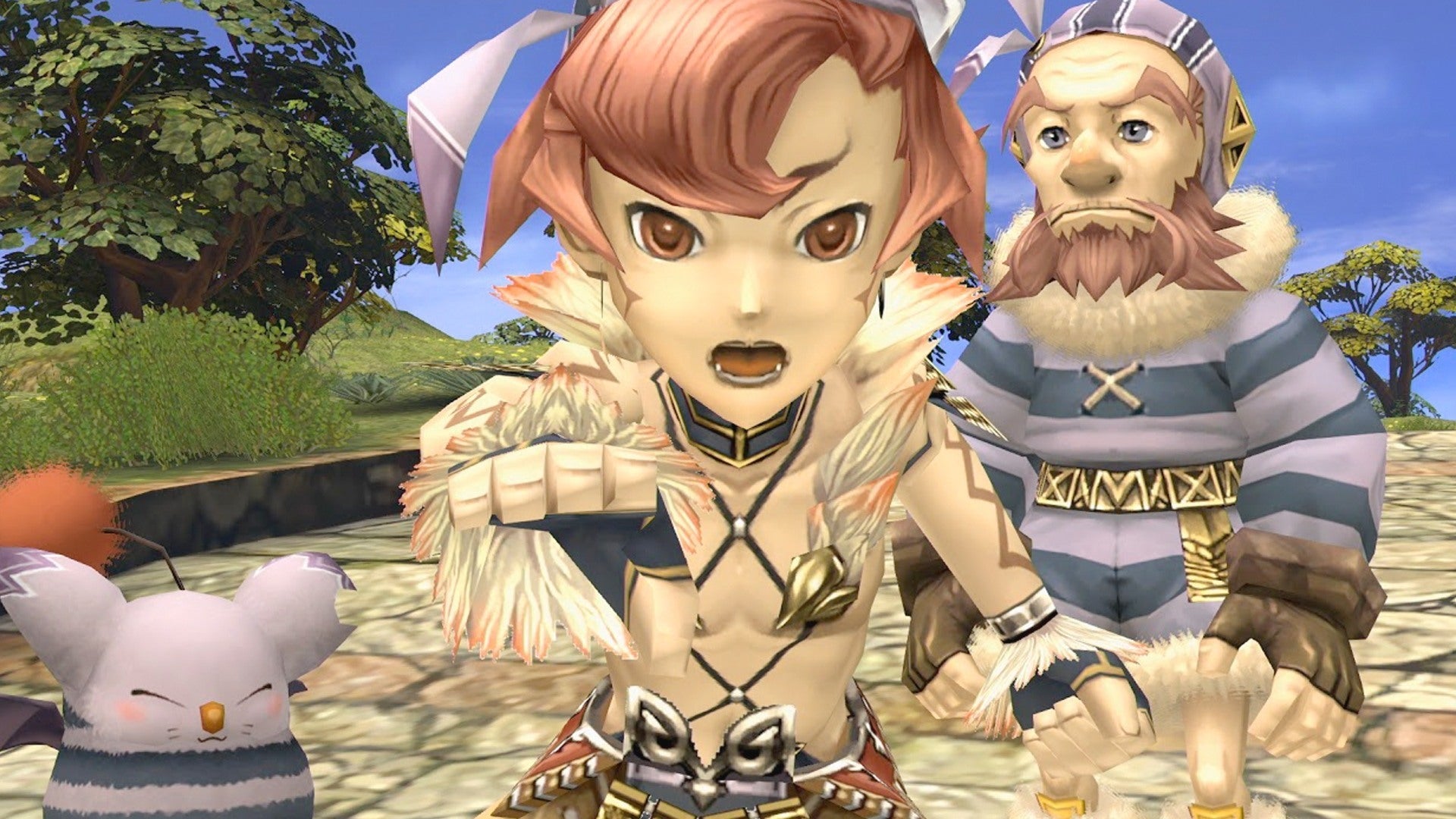 I missed out on Final Fantasy Crystal Chronicles when it came out for GameCube way back in 2004, so I was excited to hear it was getting remastered for modern consoles. A lightweight dungeon crawler based on the Final Fantasy universe, starring cute, Chibi-style characters? Sign me up! It ticks so many boxes for my interests, I couldn’t believe I never picked it up way back when. Well, it turns out past-me was doing myself a favor, because this is not a good or fun game in the slightest, and the remaster’s clunky multiplayer makes it even worse. In fact, its repetitive, boring, and frustrating nature means it’s a perfect metaphor for the year 2020: I expected really great things, but instead ended up living out slight variations of the same thing over and over again.

The Final Fantasy lore provides the scaffolding for stories, but Crystal Chronicles never actually builds anything on it. Look, I’m a sucker for dumb premises, and on paper this setting, in which everyone has to recharge their village crystals annually to keep from being poisoned, is exactly what I want from a cutesy dungeon crawler like this. I won’t knock it for being overly simplistic, because that’s exactly what I was expecting; besides, there’s so much else to knock it for and who has the time?

What We Said About Final Fantasy Crystal Chronicles on GameCube

“Final Fantasy Crystal Chronicles is a game that I wanted to like a lot more than I did. I was excited for it, connectivity and all, but something feels a little off. I don’t know whether it’s the lack of cohesive storyline, or that the gameplay elements were so surprisingly simple. Poor controls also plagued my enjoyment. I never used defend once — it would have been helpful, but it’s not practical. While there’s several nitpicky things, like being killed by the camera, the big problem is that this isn’t any different than any of the other hack n’ slash titles on the market. It has high production values, connectivity, and the Final Fantasy name attached to it, but other than that nothing stands out. If this were to be rated solely on the single player experience, the score would be much lower, but fortunately multiplayer, flaws and all, is fun.”

For one thing, the story plays out through boring interstitial cutscenes you randomly encounter at crossroads on the world map. Despite this ostensibly being a remaster, the character animations exude the purest of GameCube energy: mouths flap open and closed in a canned loop, body gestures are extremely limited, and the character models themselves don’t show a lot of signs of being updated from their 2004 versions. Square Enix has added voice acting here, something missing from the original GameCube version, but listening to someone read dull dialogue doesn’t do much to improve it. It’s hard to feel any connection to the secondary characters when their only purpose is to serve as the answers to eventual trivia questions.

I might have felt differently if people I met along the way popped into a dungeon once in a while to lend a hand, or otherwise had any effect whatsoever on gameplay, but the fact that they never do means all of these interactions are completely forgettable, trite filler I couldn’t for the life of me care about. Cruelly, you can’t just mash your way through the dialogue to get to the end, because you would then be punished later on when knowledge of your past dialogue options becomes a critical part of the story, so you still have to pay at least some attention.

It’s infuriating on the world map, but even more so in some of the levels. One of the dungeons, Moschet Manor, is set up like a mansion. There’s a central courtyard surrounded by monster-filled rooms — these are single rooms, mind you, not whole different branches or multiple locations — and entering into any one of them triggers a loading screen. Leaving them triggers a loading screen. It’s abysmal. To make it worse, the doors only open when the switch in front of them is showing the symbol for the element type of your chalice. That means I sometimes had to stand there while it cycled through every symbol before the switch activated, followed by a loading screen. Oh, and those switches are on the inside of the rooms, too, which means you need to do the same thing to leave. Any rhythm Crystal Chronicles might build up is quickly struck down by absurd loading times and pointless filler.

Fortunately, most of the boss introductions and some of the other repetitive animations are skippable by pressing the Option button. That’s pretty much all I can muster, positivity-wise: some parts of Crystal Chronicles can be skipped over entirely.

Oh, but not all of them. There’s a cutscene before the final battle, and while you can spam through the dialogue, you can’t skip it. With loading times and skipping through all the dialogue, it took me about two full minutes from the time I died until the time the battle started up again. Given the level of difficulty of the final boss, different attempts at this battle took me as little as 10 seconds and as long as 25 minutes – only to lose and start the horrible process over again. I’ve spent around 23 hours playing and I shudder to think of what non-trivial percentage of that time has been spent staring at loading screens.

I understand this is a remaster and not a remake, so keeping in the original difficulty and gameplay is fine. But the unskippable final boss cutscene coupled with the horrendous loading times – something that absolutely should be addressed in a remake on modern hardware – makes Crystal Chronicles impossible for me to enjoy for any length of time.

All of that sounds bad, but it’s not even Crystal Chronicles Remastered’s worst offense: co-op play has been relegated to online-only. If your memories of the original involve hanging out with a group of friends, conquering dungeons while using your Game Boy Advance as a controller, you can sort-of replicate it by installing the “Lite” version of this remaster. It’s basically a free trial version that allows you to join other people’s games and dungeon crawl with them at any point (provided they own the full copy, that is). So if you want to relive your Crystal Chronicles multiplayer dreams, you could have all your friends bring their Switches over with the free Lite version installed – or you play from the comfort of your socially-distanced homes. But I would much rather have had simple, local co-op instead, and since the Lite version isn’t available yet I’m not able to speak to how well it works as a convoluted stand-in.

Getting a group of friends together online isn’t exactly easy, either: you have to send them a proprietary 12-character friend code, one that expires every 30 minutes. This allows for cross-play, according to Square Enix, and the developers worked to develop the online rather than local co-op, saying it was either one or the other. Minecraft: Dungeons, a much better lite-dungeon crawler, offers the opportunity to play either locally or online, although it lacks cross-play.

There are also lobbies you can host or join, and when you first start a dungeon you’re given the option to play single or multiplayer. I was lucky enough to match up with a stranger on my first try, and we fought our way through River Belle pass. It was difficult to work together, since the only way to communicate is by choosing from a menu with pre-written dialogue options (“Let’s do this!” for example), but ultimately we were able to defeat the boss and… my connection was lost as it loaded into the post-level rewards screen. If you lose your connection at any time, you also lose any loot you might have gathered. So that was a waste of time. Also, if you’re joining a friend or stranger online to play, you don’t make any progress in your own game – that’s just for the host.

There’s also no drop-in, drop-out play, so if you find yourself in need of a hand in a particularly tricky dungeon or boss, you need to back out of the level, find someone to join you, and run through it again. There’s one dungeon with optional puzzles that can only be solved in co-op, so I’ll never see what’s on the other side of those doors because at this point I just want this to be over.

Leveling up in Crystal Chronicles is interesting, and if it didn’t require a repetitive grind I’d like it much more. Instead of earning experience points and leveling your character passively, you gain strength through collecting artifacts in the course of your dungeon crawling. There are up to eight per dungeon, and after you defeat the boss, you choose one of the artifacts to keep. Artifacts can increase your strength, magic, and defense, among others. It’s novel, and it’s almost thrilling to discover you collected an artifact with a +3 stat boost. Unfortunately, the repetitive nature of the dungeons and the battles ultimately overshadows the thrill of unlocking a powerful new artifact.

Fights, regardless of whether they’re against minions or a boss, are simplistic and require patience more than any other trait. Wait for any enemy to charge up an attack, run in and hit them, back off to avoid a hit, repeat. You can also charge up a spell and use that, and some of the attacks are ranged, which changes things up slightly. Regardless of the type of attack you use, the pattern is the same: wait, move out of the enemy’s attack, attack with your spell or weapon, get out of range, wait, and repeat. It’s boring with smaller enemies, but on the bosses it’s just mind-numbing because it’s simply a matter of repeating the same attack pattern for minutes at a time. It rewards rote memorization of simplistic patterns rather than any type of skillful timing or resource management. There were times when a boss’s minion might switch things up by coming at me from the left, but in the case of every boss, the best strategy is to take out the minions and focus on repeating the same pattern over and over again until the boss’s life bar is depleted.

You might have heard about a few extra dungeons being added in the remaster, and the good news is they exist! The bad news is you can’t open them up until you’ve beaten the main game, which took me just over 23 hours of solo play. They’re basically remixed “New Game+” style dungeons, mostly painted over existing ones with harder enemies but better loot. However, for some reason they’re not all available at any given time. In fact, they rotate depending on the real-world day. I got a dialogue screen informing me they rotate out each day at 4:00 am Pacific Time, which seems kind of unnecessary, but I’m not interested in playing them anyway.

The Incredible Number Of Viewers DC's Splashy FanDome Brought In