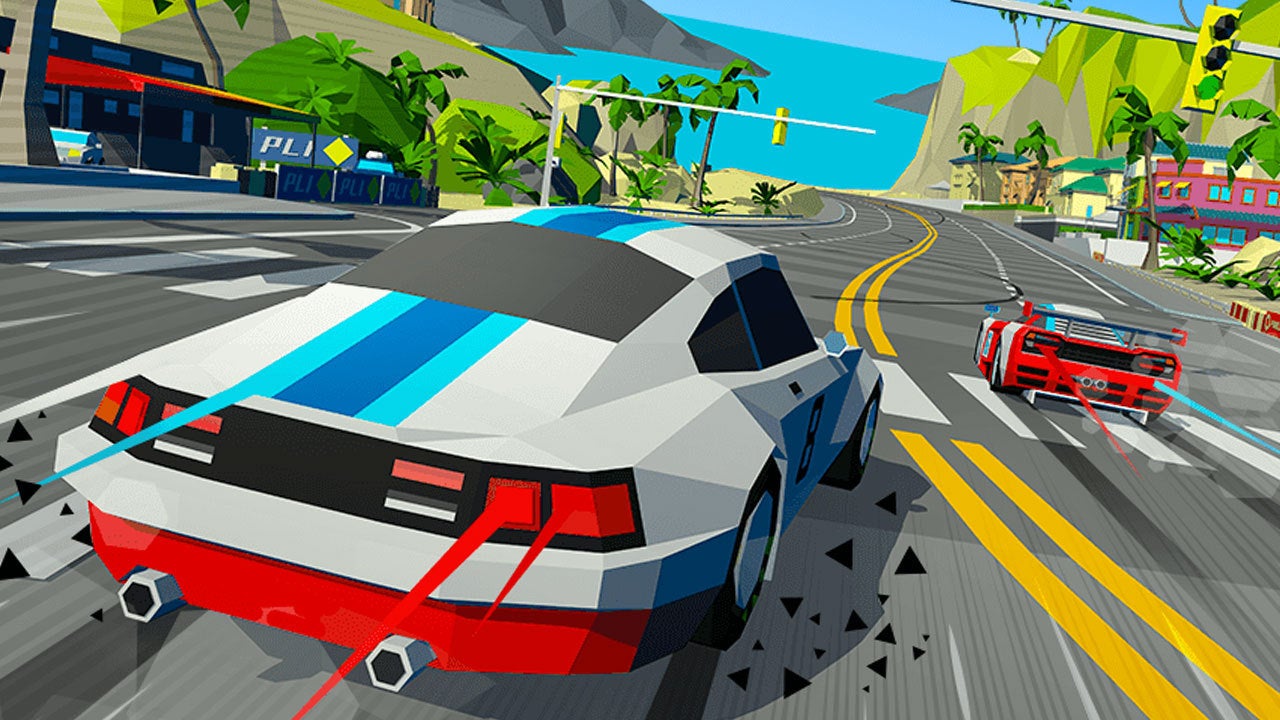 Remember when making an “edgy” game didn’t mean adding Godsmack to the soundtrack of your swashbuckling 9th century Persian fantasy, or painting Sonic the Hedgehog black and giving him a gun? Hotshot Racing remembers. In this endearingly vibrant and deliberately primitive 3D aesthetic it means octagonal wheels, chunky environments, and plenty of pointy bits and pieces that’ll poke an eye out. As a single-player experience Hotshot Racing definitely runs out of puff a bit faster than I’d expected, but it’s certainly an earnest throwback put together with a huge amount of love for the early 3D racing era.

Hotshot Racing may be full of sharp lines and low on modern detail, but its blocky cars and chiselled characters burst from the screen with retro appeal. Developers Lucky Mountain Games and Sumo Digital’s stab at an authentically ’90s atmosphere has been a roaring success in that regard.

Better still, however, is the handling of most of the cars. Arcade racers live and die on their driving dynamics, but Hotshot Racing boasts a very finely-honed handling model. Cars feel planted on the road with a satisfying sense of weight that’s sometimes absent from pure arcade racers, but they’re still snappy and responsive enough to obey your inputs instantly as you hurl them into sweeping bends. The drifting is painless to trigger with a quick dab of brake, and it’s very easy to add or reduce drift angle throughout a slide to balance your speed for a perfect corner exit. Boost is a potent way to catch opponents (although largely useless to shake them), and there’s a surprisingly powerful drafting mechanic that facilitates some furiously fast slingshot manoeuvres.

Informed heavily by its Sega AM2 ancestors and the very finest of the best-in-class British arcade racers that followed in their slipstream – including Burnout and Split/Second – Hotshot Racing is extremely easy to pick and play but demands near-perfection when tackled at Expert difficultly.

Each of the eight over-the-top drivers has a garage of four vehicles at their disposal. They’re unlicensed, but it’s not at all hard to make out Hotshot Racing’s nod to the likes of Days of Thunder’s iconic Mellow Yellow Chevy Lumina – hell, it’s even called the Thunder! Likewise, racing veterans should be able to easily identify everything from an off-brand Bugatti to a lookalike Lotus Espirit or a pretend Pennzoil R34 GT-R. There’s a decent amount of customisation options of offer for each, too – from blowers to bobbleheads – though the simple visual style means that not all of these custom bits and bobs necessarily make a big impact on screen.

Vehicles drive with subtle differences due to nuances with their speed, acceleration, and drifting stats, although I’ve found I can only feel notable dissimilarities when hopping between cars with stat bars that significantly differ from each other. I can’t really detect the smaller variations. Cars with low drifting stats are my least favourite to drive; I’ve found winning Expert races in them much more difficult than in cars with ostensibly worse top speed and/or acceleration but better drift capabilities. For instance, I won all the Expert cups in the Thunder – despite its apparent top-speed handicap – because of its ability to drift around corners like butter sluicing around the curves of a hot frying pan. The cars that are more cumbersome to drift definitely aren’t as fun to use.

Those Expert cups came pretty quickly though; there are four GPs, each featuring four races, and I collected them over a single session. Hotshot Racing attempts to incentivise attacking them over and over again by tying upgrades to achieving specific feats across the entire assortment of vehicles, but the tracks probably lack the zest to make tackling them a dozen times each feel hugely tempting.

That said, they are quite fabulous to look at and packed with eye-catching, living elements, like spinning carnival rides to animated water displays, and raging dinosaurs to somersaulting sea creatures. But that’s all on the periphery; the track ribbons themselves don’t really linger in the imagination. The circuits are wide and well-suited to this aggressive brand of racing, but they’re also not exactly brimming with memorable strings of weaving esses or cool switchbacks. You don’t want every track to be a punishing barrage of mad bends one after another, but Hotshot Racing probably features too many simple courses versus more complex ones.

The regular racing is buoyed by the presence of a couple of additional modes – the pursuit-themed ‘Cops N Robbers’ and a Speed-inspired mode called ‘Drive or Explode’ (drop below a certain speed and you’ll blow; you know the drill). Cops N Robbers is a bit more like an infected-style mode (taken down robbers are just converted into cops) and isn’t quite as fun as it sounds playing solo. The secret to success as a robber just seems to be to hang back and let the AI hassle the frontrunners, and the car combat as a cop is fine but a little one-note.

The breakneck Drive or Explode is the better of the two – a hectic battle against both the clock and an ever-increasing minimum speed limit. Collecting checkpoints to fend off the bomb timer, avoiding damage, and keeping your car travelling as fast as possible is a frantic juggling act and some of the better fun I had in Hotshot Racing.

The best way to have fun, however, is the four-player splitscreen. It doesn’t quite reach the highs of a full-on, four-way combat racer like Mario Kart or Crash Team Racing, but the high-speed hijinks of Hotshot Racing makes for some quality same-couch competition.