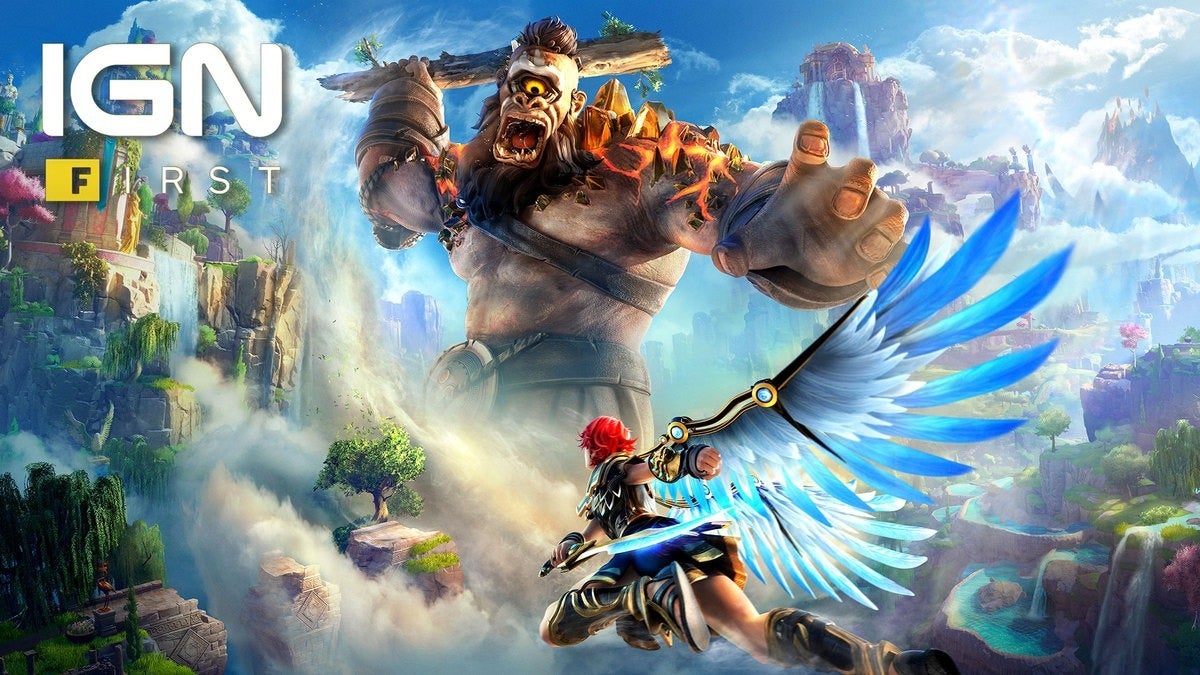 Immortals Fenyx Rising is Ubisoft Quebec’s big new project, and the studio’s first new IP in over a decade. Fresh off of Assassin’s Creed Odyssey, the Canadian team transformed its love for Ancient Greek mythology into a whole new world for protagonist Fenyx to journey through. Immortals itself has also experienced quite the journey, and we spoke to game director Scott Phillips to learn more about the creation of this new universe, and its evolution from original title Gods and Monsters to Immortals Fenyx Rising.

“For me, the first memory I have of what would eventually become Immortals Fenyx Rising was a bug on Assassin’s Creed Odyssey where you’d be sailing on your ship, but instead of your human crew, you ended up having cyclopes as your crew,” Phillips recalls. “It was just sort of one of those moments like, ‘Oh wow. Yeah, that’d be really cool actually to do a full game focused on this mythology.’”

Phillips and the team didn’t plan on just recreating Assassin’s Creed Odyssey with a greater emphasis on the more fantastical elements of Greek mythology, but there were ideas from Odyssey that they could use. “We spent a lot of time on Odyssey developing compelling loops,” says Phillips. “As an open world game with lots of exploration, you need to entice the player to travel the world. You need to entice them to go off the beaten path and not just do an A to B to C experience.”

Those loops influenced the philosophy that drives Immortals. “Early on, we came onto a phrase that I think still continues now to be true, that we wanted the journey to be as challenging and rewarding as the end destination,” says Phillips. And so Immortals’ structure began to take shape.

“We wanted everything that you do along the way to get to some place to be fun, exciting, challenging, interesting,” he says. To create that challenge, Fenyx has a stamina bar that drains when they climb, glide, and unleash powerful combat abilities. “That’s where bringing in stamina makes the exploration of the world a bit more uncertain. We don’t give you as much information.”

[poilib element=”quoteBox” parameters=”excerpt=%E2%80%9CI%20don’t%20think%20you%20can%20really%20be%20a%20gamer%20and%20say%20that%20you%20don’t%20like%20Zelda%2C%20or%20you%20haven’t%20played%20a%20Zelda%20at%20least.%E2%80%9D”]“That was a philosophy that we carried throughout the entire game, that changed the traversal to the fights to the puzzles as well, which is a whole new aspect for us,” Phillips notes. “There were some people on the team that had Prince of Persia experience, but as a global entity, the directors and the team didn’t have a ton of [puzzle] experience, but we felt really confident that this was a way to separate ourselves to make something unique and different.”

With stamina and puzzle solving key parts of the gameplay loop, it’s easy to draw parallels to The Legend of Zelda: Breath of the Wild. Immortals even has puzzle dungeons, called Vaults of Tartaros, which are akin to Breath of the Wild’s Shrines. Phillips says that Zelda – and more importantly, its idea of the hero’s journey – has indeed had an influence on Immortals.

“I don’t think you can really be a gamer and say that you don’t like Zelda, or you haven’t played a Zelda at least,” he says. “So, that sort of Zelda, Lord of Rings, Dungeons and Dragons, all of these things that have fantasy and being a hero and finding the sword and saving the world. There are all these elements that come into play for Immortals Fenyx Rising as well. We wanted to give a fresh take on that by really binding ourselves to Greek mythology and bringing that into the 21st century.”

All of these elements were part of the game when it was revealed at Ubisoft’s E3 conference in 2019. Back then it was known as Gods and Monsters, and had a slightly more Pixar-like quality to its art style. It was set to be released the following February, but a long delay meant that Ubisoft Quebec had many months to improve and iterate on what it had created. This led to many new features, the most notable being a refreshed art style and a new name.

“Visually, we wanted to add more details,” Phillips says, noting that the stylistic design was a new challenge for the team after the realism of Assassin’s Creed. “Having more time, you can really look at, ‘Okay. How can we make everything consistent, raise the quality bar everywhere? Add some things where it makes sense.’ And then on the gameplay side, a lot of it was adding quality, adding variation to enemy attacks.”

The extra time also allowed the team to put together extra challenges for players. “We’ve got legendary creatures and world bosses and these wraiths that are these fallen heroes of ancient Greece. We really expanded on the variety,” Phillips says.

[poilib element=”quoteBox” parameters=”excerpt=%22It’s%20ancient%20Greek%20Guardians%20of%20the%20Galaxy.%22″]“On the narrative side, we wanted to change the framing of the narrative with the narrator,” he adds. When the game was known as Gods and Monsters, it had just one narrator; legendary Greek author Homer. “You heard his voice a lot, so you didn’t feel like it could change or was necessarily involved in the story that you were being told,” explains Phillips. These days, Immortals has two narrators: the god Zeus and Titan Prometheus.

“We wanted to go with two characters that could sort of oppose each other,” Phillips explains. “In a way, it’s almost like a sportscaster. You’ve got the guy that’s calling the shots, calling the play-by-play, but then you’ve got the color commentator. Prometheus is the play-by-play, and then Zeus is the color commentator making things fun and interesting and unique. And so, that sort of reframed the tone a bit.”

“It put more focus on Fenyx as well, and so that’s where the name change comes from,” Phillips adds, although speculation about other reasons for the change has since been made. “We wanted to promote Fenyx, and Fenyx’s journey with the gods to be the centerpiece.”

As for that tone, Phillips has a good comparison that instantly sparks excitement. “I think the description for me of the tone that’s worked the best and made me understand it very quickly was that it’s ancient Greek Guardians of the Galaxy,” he says. “It’s light-hearted, interpersonal interactions. It can be fun, it can be very light, but the stakes of the universe are on the line and everything could be destroyed if you failed. So, it’s that great interplay that makes the game special.”

Making Fenyx the centerpiece of the game led to a redesign of their character. “I think where we were at E3 2019, we were still not sure,” says Phillips of Fenyx’s old, wide-eyed design. “I think that’s potentially why you could see the helmet. We were just not sure. ‘Is this right? Are we fully happy with how this is going to look?’ So, we kept tweaking and tweaking and tweaking”

“The player character we’ve defined better, and made them much more varied, with more options for you to customize your own Fenyx,” says Phillips. “The core and the heart of the game were there at E3 2019, it’s just expanded and improved since then.”

With all these iterations locked in, Immortals Fenyx Rising is now in the last stages of production. The final touches are being added, but we’ve been impressed with what we’ve seen so far; read our Immortals hands-on preview to see our detailed thoughts. For more, stick with IGN, as we have other exclusive Immortals Fenyx Rising interviews and videos to come over the next few weeks.