Ubisoft is holding their upcoming press conference, Ubisoft Forward, this week. We have all the info you need to know to tune in, including when it starts and where you can watch it. The publisher already announced some games they will be showing off new details for, including Watch Dogs: Legion, Hyper Scape, and the recently re-named game, Immortals Fenyx Rising (previously known as Gods & Monsters).

Ubisoft Forward’s September livestream will take place on Thursday, September 10. It starts with a pre-show at 11am PT/ 2pm ET/ 7pm BST, and the main show kicks off at 12pm PT/ 3pm ET/ 8pm BST. If you’re joining in from Australia, the event is on Friday, September 11, and the pre-show will start at 4am AEST and follow up with the livestream at 5am AEST. 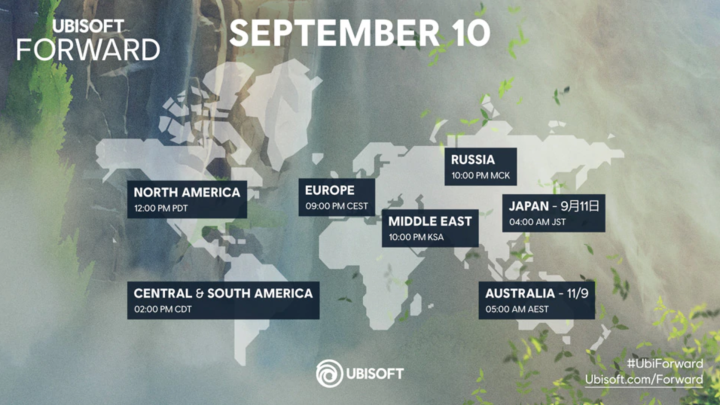 How to Watch Ubisoft Forward (September 2020)

What to Expect from the Upcoming Ubisoft Forward

Ubisoft didn’t reveal too much in their blog post on the event, but they did say there will be a Brawlhalla matchup featuring the developers from Blue Mammoth, along with the Ubisoft News team. The teams of The Division 2, For Honor, Ghost Recon Breakpoint, and Roller Champions will also have updates they will share at the 11am PT pre-show start time.

For the main show, Ubisoft revealed that updates will be shared for Rainbow Six Siege, Watch Dogs: Legion, Hyper Scape, as well as Immortals Fenyx Rising. Other “yet-to-be revealed surprises” are also in the lineup, along with deep dives for two unreleased games after the main show.

We already know Beyond Good and Evil 2 isn’t coming out this year, and in July 2020, it was reported that Ubisoft was rebooting Skull and Bones. Last year, Ubisoft CEO Yves Guillemot talked about a potential return of Splinter Cell but “on different devices”. With that in mind, it’s unclear what we’ll see but there are plenty of possibilities.

Viewers who tune in to the show can receive in-game rewards and items if they log into their Ubisoft account during the livestream. These rewards include 3 XP Boost Tickets for For Honor, a Refract Baton for Hyper Scape, a Year 5 Events Charm for Rainbow Six Siege, and a Ubisoft Forward mask for Watch Dogs Legion.

At the first Ubisoft Forward event, the publisher announced Far Cry 6 and gave it a February 2021 release window. Assassin’s Creed Valhalla was confirmed for a November 17 release date but that has since changed to line up with the launch of the Xbox Series X and Series S. Crossplay for Brawlhalla and a handful of updates coming to Ubisoft games were announced, as well as a look at some Watch Dogs Legion gameplay.

Apparently, No One Originally Wanted To Hire Pat Morita For The Karate Kid