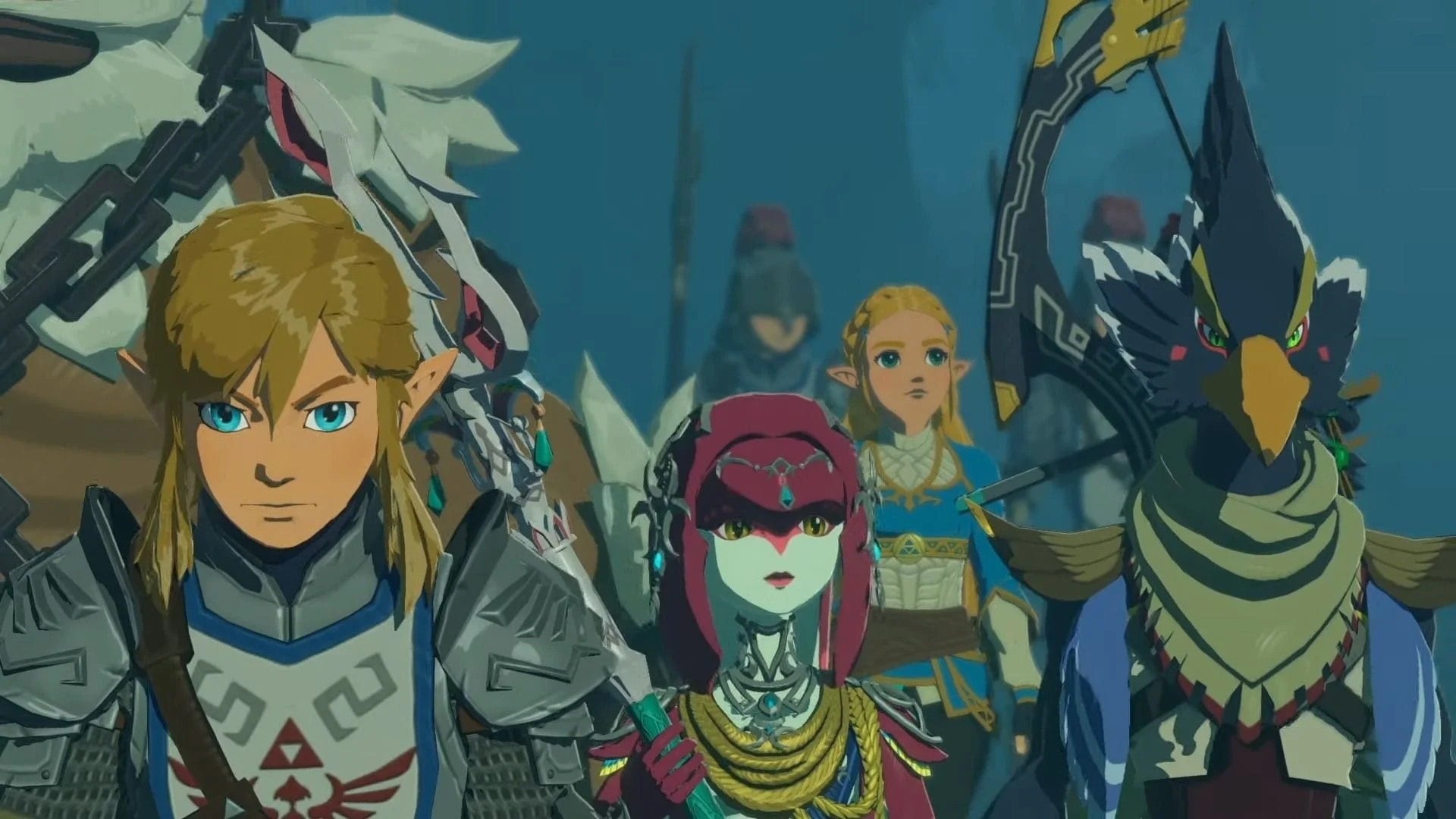 In a special livestream presented today at Tokyo Game Show 2020, Koei Tecmo revealed live gameplay of Hyrule Warriors: Age of Calamity on the Nintendo Switch, giving the world a glimpse of what kind of action to expect from Link, young Impa, and the four Champions of Hyrule from The Legend of Zelda: Breath of the Wild, the 2017 Nintendo game that this title serves as a prequel for.

Play began with “The Battle of Hyrule Field” as Link, clad in armor instead of his blue Champion’s Garb from the previous game, stood surrounded by the royal Hyrulian army. In Dynasty Warriors style, different character portraits popped into the corner of the screen delivering lore and directives. Link charged forward at full speed with no sign of a stamina meter in sight, offering no indication that he needs to walk at all when he can run everywhere – or surf, as a tap of a button sent him rocketing forward sliding atop his shield, knocking back enemies by the dozens.

Instead of a single attack button, Hyrule Warriors offers a choice of “regular” and “strong” attacks with the Y and X buttons, respectively. This being a Dynasty Warriors game, every attack Link used has huge range; his first combo in the video scattered eight Bokoblins. A running counter in the corner kept track of how many monsters were slain during the demo. It surpassed 600 in just a few minutes of fighting.

Nearly all of Link’s combat abilities from Breath of the Wild were shown to be in Hyrule Warriors. A timely dodge will trigger a slow-motion opportunity to rush an opponent for multiple hits. Pulling out his bow while in mid-air likewise slows the game down for an arrow rush. Using the Sheikah Slate, he can throw bombs, freeze enemies with Stasis, and create columns of Ice with Cryonis.

Hyrule Warriors also gives Link new ways to fight. The spin attack from Breath of the Wild is now a “special attack” which nearly clears the screen. When fighting certain stronger enemies like a Moblin, a “weak point” can appear on screen as a hexagon. Attacking during this time lowers their health and shaves down the hexagon; once it is gone, Link can execute a special “Smash” attack which should end the fight. New “counter” abilities also allow him to toss multiple bombs in succession or summon an ice pillar to stun charging foes.

The biggest surprise of the stream was when Link happened upon a young Impa, seen as an old woman in Breath of the Wild, running from monsters. He rescued her, and in doing so triggered the activation of a small, egg-like Guardian Robot which seemingly triggered a tower to burst out of the ground. The development staff declined to explain this sequence. However, a few minutes later an on-screen message announced Impa was now playable. With a push of a button, the action switched to her. Impa in Hyrule Warriors moves like a ninja, with the ability to create shadowy doubles of herself and slice enemies on screen so fast that she disappears.

In a separate trailer shown after the live gameplay, footage of the four Champions in battle was shown featuring some of their special combat abilities. Mipha summoned a wave of water to wash foes away. Revali was adept with a bow. Urbosa wielded bolts of lightning. Daruk, besides using Stasis as Link does, could curl into a ball with his Protection shield to bowl over monsters.

While today’s live stream was focused on the action, it was impossible not to notice how different the world looks in this game set 100 years before Breath of the Wild. Hyrule Castle is still Hyrule Castle, untouched by Ganon. As Link ran around there were more castles and shops and signs of an active society everywhere, even as monsters appeared.

Hyrule Warriors launches for Switch on November 20 this year. While the members of the development team were generally tight-lipped about answering questions during gameplay, producer Yosuke Hayashi said that “more new info” would be revealed on Sunday, September 27 during a separate livestream.