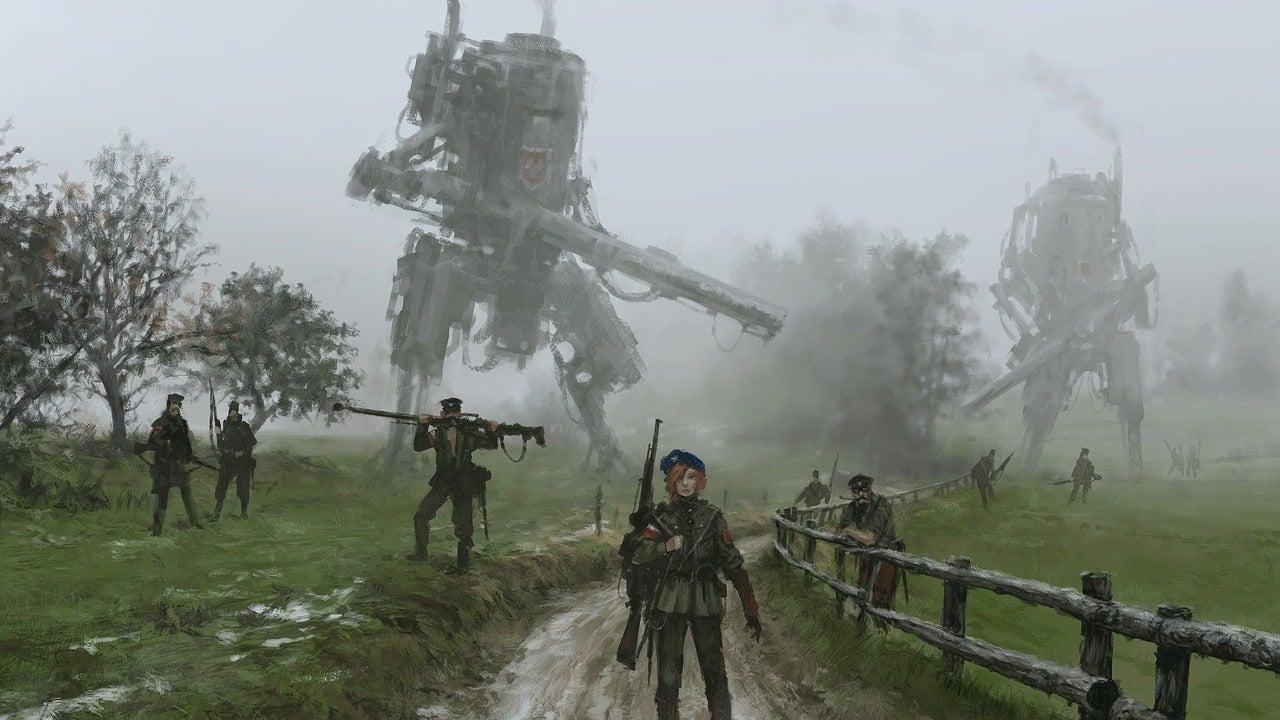 The huge Brunhilde lumbers towards enemy lines, a walking dreadnought. Its dorsal mortar thunders before it turns and opens fire with a broadside. It’s commanded by the disciplined, honorable Gunter von Duisburg, who barks orders at his men and demands obedience above all else. I’ve barely spent a few hours with von Duisburg but I feel an attachment to him because his character has been precisely communicated by both action and dialogue. When he leads the naive Prince Wilhelm into combat at the dawn of the great war, I can’t help but be curious about the nascent conflict between the two and where it’s going to lead.

The single-player RTS campaign is a beloved thing, but has become rare in recent years. In Iron Harvest, King Art Games is doing their best to make a campaign that will appeal deeply to anyone who ever loved an RTS campaign. If the preview I played of the first three Saxony missions is anything to go on, Iron Harvest will have enough plot twists, nail-biting missions, and narrative drama to keep me engaged to the end.

Iron Harvest’s setting, the 1920+ world of polish painter Jakub Różalski, is a roaring engine of diesel mechs and World War 1 themes. It’s an alternate history world where the problems that arose in our own are amplified by the powerful automachines and mechs that stride its battlefield. Fully industrialized warfare is sprung on the people of Eastern Europa and its nations, Saxony, Polania, and Rusviet, as a terrible thing. Saxony is a powerful nation with a proud imperial military tradition; My job was to be the fist of the nation.

The story seems written with a self-awareness of our own history. The characters that populate Iron Harvest know that the war they’re locked into is futile and horrible, but couldn’t be foreseen nor avoided. The Saxony campaign I played used a complex narrative structure of cutscenes, interspersed with flashbacks to the great war in the form of missions, to show how the war had changed the characters—including a hugely satisfying plot twist and a surprising character arc for Prince Wilhelm. I went into the campaign expecting some fun missions, but I got a more interesting and dramatically compelling story than I expect from most games, let alone an RTS.

But story won’t carry a game on its own. The core of Iron Harvest is a mid-paced RTS similar to Relic’s Company of Heroes or Dawn of War. It’s really somewhere in between the two. It eschews out-and-out lethality in favor of combat that cares more about unit composition and positioning over split-second tactics. Some units very effectively counter others, but even the fastest times-to-kill in the game aren’t faster than you can click the retreat button. To put it bluntly, the plodding mechs aren’t asking you for Starcraft-tier reflexes.

And it works great in single-player. The missions I played had excellent level design that not only showcased the way the game works, but offered up some pretty fiendish challenge at times. Some segments gave you limited units, requiring you to be careful how much damage you took and how you deployed—and especially what weapons you brought to a fight.

In Iron Harvest, infantry units can swap between roles by picking up new equipment from the ground. That can be weapons another unit dropped when killed or gear that you found in a supply cache. The levels with a limited number of units really shone once I figured out how to manipulate my units by changing gear. I swapped weapons as I went—units would grab shovels to build field defenses, defend them, then pick up grenades off the enemy dead to become grenadiers for a new offensive.

These more freeform mission segments would segue into base-building sections fairly often – either to build up and defend an area, go on the offensive, or both. Capturing resources was never too easy, and it was obvious that the AI prioritized both attacking my base and taking resource nodes for itself. In some missions, it was all I could do to survive waves of attackers as I clawed my way up the tech tree.

Difficulty made the comebacks and victories all the more satisfying. I loved the final pushes in those games, as the towns I so desperately defended were literally crushed beneath the steel feet of my heaviest mechs going to obliterate the enemy’s stronghold, or capture the final objective. I’m looking forward to seeing more when Iron Harvest releases for PC on September 1.

Jon Bolding is a contributor to IGN. Talk real-time strategy games with him on Twitter at @JonBolds.