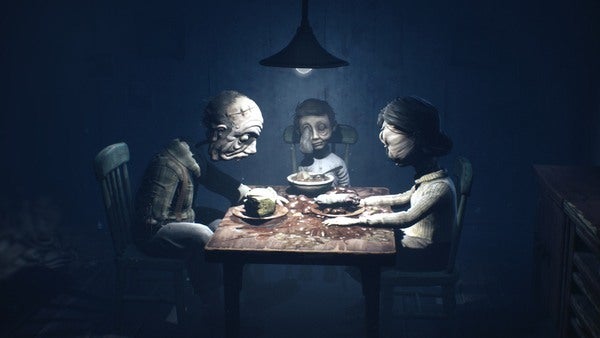 Little Nightmares introduced us to a disturbing world inhabited by monstrous enemies – like the misshapen janitor with his elongated hands, or the corpulent twin chefs preparing a grotesque feast for their disgusting guests. Following a hands-on encounter with Little Nightmares 2’s first new adversary, I’m happy to say that the sequel is proving to be just as unnerving.

This particular tale puts you in control of Mono, a diminutive figure who adorns his head with a paper bag in an oddly cute fashion statement. Where the first installment had you navigating the tight confines of a ship, this sequel introduced me to foreboding and equally oppressive woods, filled with cages, traps, and viscera. It wasn’t long before I hesitantly explored the basement of an old shack to find an imprisoned child who turned out to be Six, the protagonist from the first story (minus her signature yellow raincoat, which immediately had me thinking about when exactly this story takes place).

True to its predecessor, Little Nightmares 2 will have you navigating the side-scrolling world and interacting with the often oversized environment to overcome obstacles, uncover paths and dodge traps – or worse. The locations are as suitably haunting as they are engrossing, with every discarded item and object telling a story you aren’t quite sure you want to hear the ending to. Why are there so many abandoned shoes near these animal cages? Are those stuffed bags buzzing with flies full of dead animals – or something even more disturbing? I was also pleased to find Little Nightmares 2 made the subtle effort to warn you of danger, like a soft breeze rattling the bear traps hidden beneath the leaves, or a scavenging crow ready to squawk and draw attention to your location upon drawing close.

The true danger in my hour-long demo took the distorted form of The Hunter, a truly disturbing bag-headed foe armed with a trusty hunting shotgun. The Hunter’s appearance is marked by some excellent use of background lighting, encasing his figure in ominous shadows as he stripped the fur from a beast with a sound that made my skin crawl. Unlike some of the enemies in the first Little Nightmares, surviving this encounter wasn’t about staying out of reach – it was about avoiding gunfire as his bullets tore through everything I tried to hide behind. Escaping the demented Elmer Fudd may not have been overly difficult, but it did provide several tense moments of cat-and-mouse.

Having an AI companion in Six proved to be an interesting change, even if it didn’t alter the flow of the game that much. I was able to beckon her over with the press of a button to help raise objects or prepare to grab me if I jumped across a gap, but most of the time it felt like she already knew what to do next. I also noticed that by following my lead, she never really presented herself as a target worthy of the Hunter’s attention – and honestly I’m glad for that. Escaping the clutches of creepy monsters is already enough to worry about, and so far I’m thankful I didn’t have to constantly turn my attention to make sure Six wasn’t getting herself killed. Nothing turns horror into frustration like an AI partner that’s more trouble than they’re worth, but I do hope Six gets more chances to prove herself.

My time in Little Nightmares 2 ended with an escape from the forest, and the entire section felt well-paced with the right amount of tension that never dragged on for too long. This led me to encounter the towering structures of a city that looked as though it sprang out of a Tim Burton animated movie. I can only excitedly guess what fresh horrors I’ll find waiting within when Little Nightmares 2 releases on PC and consoles on February 11th, 2021, with next gen versions to follow sometime after.

Brendan Graeber is a Guides Editor at IGN, and has a hard time finding collectibles when he’s too busy being scared. Follow him on Twitter @Ragga_Fragga.

After The Batman Trailer's Riddle Was Solved, Fans Are Already Discovering More About Paul Dano's Riddler