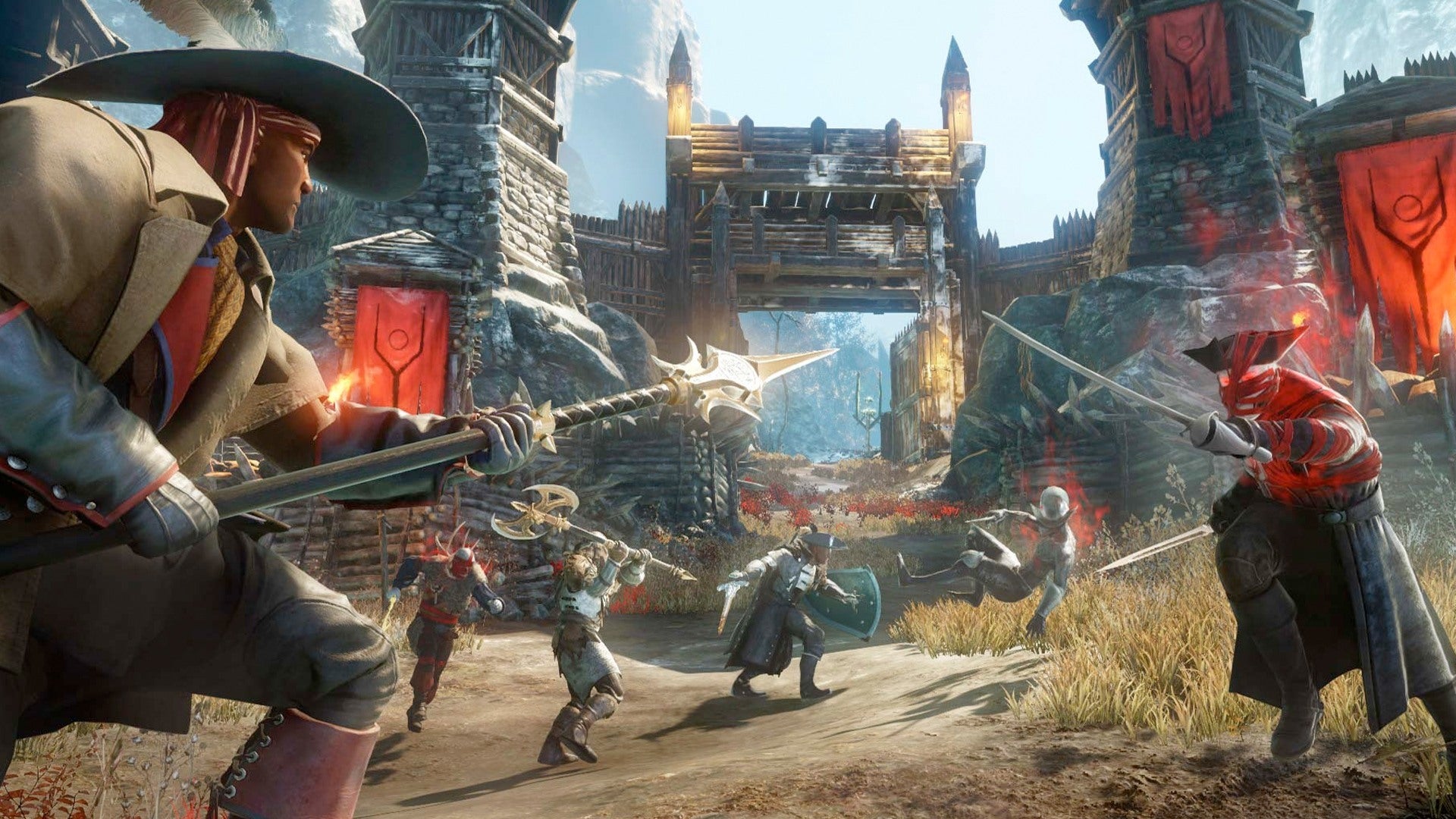 New World isn’t the first game to feature real-time combat with projectiles and PvP mechanics, nor is it the first MMO to feature massive battles with dozens of players on-screen at once. But it certainly is one of the first to do all of those things, seamlessly, in a persistent online world at this scale and visual fidelity. To fully appreciate just how impressive the 50v50 PvP War battles are in Amazon Game Studios’ upcoming flagship AAA MMO, you have to understand the technical details of what makes it all possible.

In a game like Dark Souls, which Amazon cites as major inspiration for New World’s core combat mechanics, every weapon swing, magical spell cast, or arrow fired travels through the air with actual velocity and momentum. This is what allows players to dodge out of the way if attacked at the last second rather than something hitting them no matter what if the enemy had them targeted. Most MMOs don’t have combat like this because calculating all those projectiles and simulating that many physics objects is a hefty undertaking to sync across hundreds of users at once. Luckily, the significant server resources via the AWS (Amazon Web Services) branch of the company makes it possible.

I’ve played enormous PvP battles in games like Guild Wars 2 and Elder Scrolls Online – they’re absolutely fun and epic in their own right. But those games are a middle ground between modern real-time action-based combat and traditional target-based MMO combat. So when entering the fire-soaked battlefield of a War session in New World, it’s absolutely wild to see so many fireballs, arrows, and gunshots peppering the sky all at once.

Earlier this year I got to try New World at an onsite studio visit, pre-COVID that allowed me to dig into the PvE side of things for a few hours, followed by a quick run as a Defender in a War battle. Yesterday, that was flipped and I got to see things from the Attacker side.

In New World, a War session lasts a maximum of 30 minutes and is essentially split into three phases: outer control points, breaching the gates, and taking the fort. From what I’ve seen, it’s a well-balanced system that strongly encourages teamwork and cooperation. Both times I’ve played it was mostly just chaos since everyone was new and still learning how to play, but I can imagine if all 100 people on the battlefield knew what they were doing and had rapport with one another it could be an impressive spectacle of combat tactics on both ends.

The first phase tasks the Attackers with capturing three control points. The first point, A, is in the middle of the open field and must be captured on its own before B and C open up. This creates an immediate and frantic slaughter at the very outset as a massive chokepoint of combat. From there B and C flank either side of the fort, requiring the Attackers to either split up or focus on one point at a time, but then that risks the Defenders mounting a foothold on the opposite end.

After capturing all three points the second phase begins: breaching the fort. Attackers must knock down at least one of the gates on the fort to get inside, while Defenders have to keep them away and repair gates to try and survive. The final phase is simply all about taking control of the central point at the middle of the fort’s courtyard. If the Attackers can do that, it’s game over and that Company now controls the fort and its surrounding city. If the Defenders hold them off long enough and the time runs out, the Defenders win and retain control.

There are some added layers to it all as well, such as Battle Tokens which can be used to purchase new supplies like healing items, ammo, and repair kits, as well as siege weapons to deploy along walls or on the battlefield. It adds a good sense of mid-game progression.

As great as the War mode is in and of itself, I still have some concerns about New World’s longevity and depth. There is only the one style of fort with only that exact layout as an option for sieges. I can certainly imagine that’s going to get awfully repetitive after a while.

Even the most diehard of MMO fans can only stomach a certain amount of grinding before they get tired of the same thing over and over. I’m not convinced New World has a good solution for this problem, because every time the developers were pressed on the topic during the post-game roundtable Q&A it seemed like they either wanted to dodge end-game PvE questions or simply explain that players would be able to gather materials and fight world bosses for fun and resources. Anyone that’s spent any length of time at the end-game tier of other MMOs like World of Warcraft, Final Fantasy XIV, and Elder Scrolls Online will attest to the fact that grinding for crafting materials and bragging rights just isn’t enough.

Based on what I’ve seen and heard, it doesn’t sound like the developers have any plans for more traditional, structured PvE content such as dungeons and raids, instead relying on emergent open world encounters and checklist-style resource gathering to support cities and forts in battles against rival Companies. The one exception is the Invasion scenario that Amazon keeps telling us about but hasn’t shown off specifically or let us try yet. An Invasion scenario works almost just like a PvP War, but instead of battling other players you’re fending off NPC enemies. Think of it kind of like a survival-based Horde mode, but if you lose, your Company loses control of the whole region.

Granted, Amazon did delay New World into Spring 2021 and it sounds like the decision to announce that delay may have been driven heavily by the need to shore up the actual amount of content in the game, which is encouraging. Hopefully that’s enough time to flesh things out more.

At the end of the day though, if you’re more of a PvE player that likes questing and digging into a rich narrative, I’m not sure this is the game for you. I’d love to be wrong, but it certainly seems to be catering specifically toward those that enjoy large-scale PvP warfare.

For more on New World check out my Everything You Need to Know about the game and read my interview feature that focuses on how Amazon plans to make New World stand out in a crowded MMO market.

David Jagneaux is a freelance writer for IGN. Talk RPGs with him on Twitter at @David_Jagneaux.