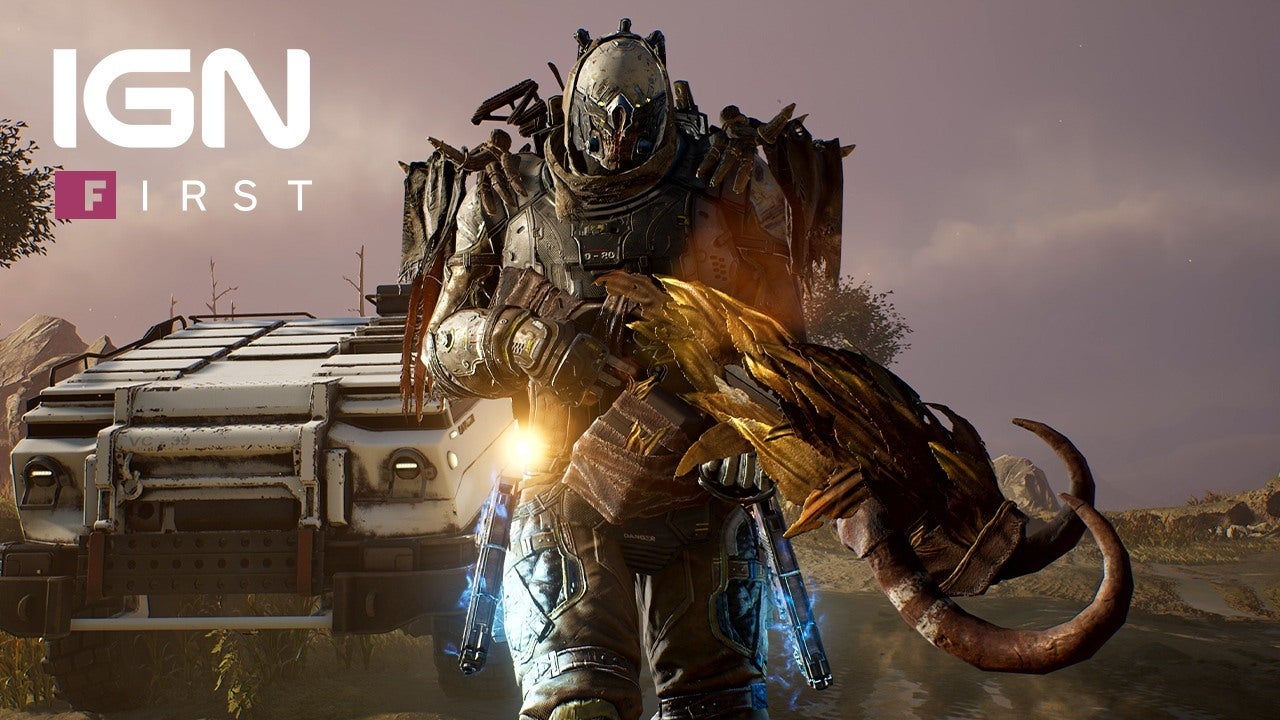 Outriders’ fourth and final class to be revealed is The Technomancer; a gadget-based class able to call in missile strikes, freeze enemies with ice fists, and even go full Arnie by materialising a minigun in its hands. It’s an artillery platform in human form, basically.

Recently I had the opportunity to test out the Technomancer and see what abilities it has to offer, and how it compares to the Pyromancer, Trickster, and Devastator. What I found was yet another class that feels notably distinct and provides a unique angle of approach for Outriders’ violent encounters.

The Technomancer is much less direct than its sibling classes, as most of its abilities are deployables. Its initial trio of summonable gadgets are a good taster platter from the class’s full menu: the Scrapnel is a bowling-ball sized proximity mine that’s thrown like a grenade; the Cryo Turret automatically freezes enemies, slowing them down and opening them up for easy headshots; and the Pain Launcher is a missile battery that obliterates an area with a barrage of explosives. You can probably already see how those abilities fit together.

In direct opposition to the damage the Technomancer puts out are its defences; the class is basically wrapped in tin-foil rather than armour. As the squishiest of the four classes, the Technomancer relies more on cover and letting its deployables do a lot of the dirty work. To help out, any damage inflicted – be that with weapons or gadgets – heals the Technomancer, regardless of distance to target. Unlike the Trickster and Devastator, who must be up close to benefit from health leeching, the Technomancer is pretty forgiving when it comes to self-maintenance.

That system means big combos result in huge health top-ups. There’s a real satisfaction in using a Cryo Turret or Cold Snap – an area-of-effect ability that freezes enemies surrounding you – when you’re moments from death, and then dropping a Pain Launcher to obliterate everyone around you and fully restore your health bar.

People Can Fly’s designers promise that the flexibility of Outriders’ skill tree means that the Technomancer need not remain a glass cannon its entire life; that set up is just the base from which you build. Despite only having spent an hour with it, I can already see the class’s potential in a support role. Fixing Wave is an ability that not only heals you and your turret children, but all players in the squad, too. Combined with the Cryo Turret and the beefier Blighted Turret – which inflicts the poison-like toxic effect on foes – I imagine the Technomncer could be a great crowd controller while also keeping HP topped up.

For me, though, the Technomancer feels more like a headline act when it’s an all-out damage dealer. Like some of the other classes, it has an ability that can replace the bullets in your weapon’s magazine with elemental projectiles; in this case toxic Blighted Rounds. But where it gets really fun is Tool of Destruction, perhaps the bluntest instrument any class has access to. Tapping the ability’s trigger button materialises a temporary rocket launcher in your arms, loaded with four missiles that are sure to get a party started. It’s a great trick to pull when mini-bosses make their appearances.

Hold the button instead, however, and you’ll summon a rotary mini-gun, pre-prepared with 160 rounds of pure punishment. It’s ideal for making mincemeat of enemy hordes, of which there are quite a lot in Outriders. It’s a shame everything on Enoch seems to have red blood, though, because with some green spatter you’d have a reasonable Predator cosplay going on.

People Can Fly note that it has offset the huge damage potential of the Technomancer with slightly longer cooldowns compared to its other classmates. Tool of Destruction certainly kept me waiting, but I’m interested to know if some tinkering with the skill tree and the use of some modifications will bring the cooldowns more in line with the speedier other classes.

The Technomancer seems like another fun addition to Outriders’ collection of bombastic killers. Even in just an hour of play it felt flexible; by mixing up the combination of assigned skills I felt like I was able to fulfil a variety of playstyles, be that herder of automatic turrets or wielder of oversized weaponry. And, if Outriders’ promise of extensive build potential proves true, it seems a fun class to fine-tune over long hours of play. If The Division’s tiny turrets and whining drones didn’t quite do it for you, then the Technomancer may be more your speed.

Disneyland Officially Extends Cast Member Furloughs, But There May Be Hope For Reopening

Tue Aug 25 , 2020
Disneyland isn’t expecting to reopen soon, but there is reason to be optimistic. Source link