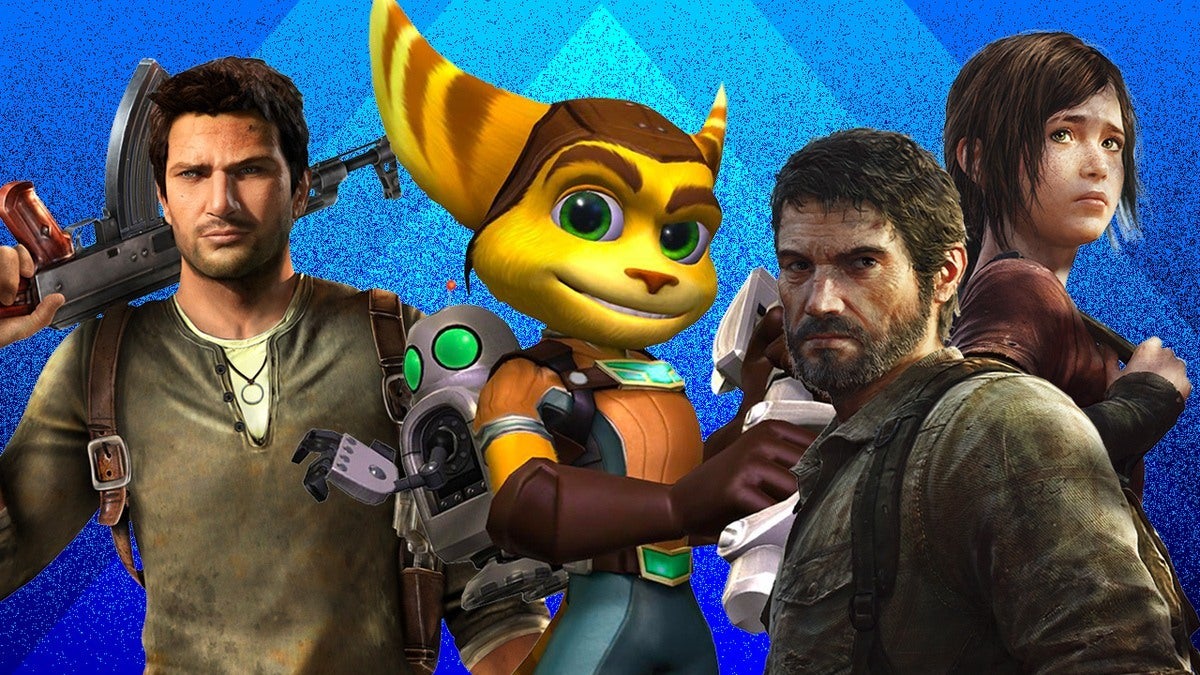 This generation, Sony has cemented its status as the industry’s premier publisher of narrative-driven, single-player games. Over the past four years especially, the company has rarely missed the mark; whether it be new entries in acclaimed series (Uncharted 4, The Last of Us Part II), fresh takes on old properties (God of War, Marvel’s Spider-Man), or brand new IP (Horizon Zero Dawn, Ghost of Tsushima), there’s been a remarkable consistency in the quality of PlayStation-exclusive releases.

With Sony’s PS4 swan song Ghost of Tsushima now behind us, we’re looking back at the output of PlayStation’s biggest first-party franchises over the past seven years — and beyond(!).

(This list measures the time between original, mainline releases only. If a spinoff or remake was released more recently it’s noted with an asterisk (*). Time elapsed figures are based on U.S. release dates and are recorded as of August 2020.)

We may be only a month removed from Ghost’s debut, but after its record-breaking launch, it’s safe to assume Sony has a new franchise on its hands. In addition to becoming Sony’s fastest-selling original IP debut this generation, Ghost of Tsushima had the best sales launch ever for developer Sucker Punch and was the best-selling game of July in the U.S.

Next up for Ghost is a new co-op mode that will be released this fall.

While the video game future of Naughty Dog’s post-apocalyptic series is uncertain, we know the franchise will live on through a different medium: A television adaptation is in the works at HBO, led by Naughty Dog director Neil Druckmann and Chernobyl creator Craig Mazin.

Sony has released an MLB game each year since 1998, with “The Show” subtitle appearing every year since 2006. That yearly cadence should continue, though beginning as early as next year, The Show is expected to be released on non-PlayStation platforms for the first time.

Blood & Truth may become PlayStation’s first VR franchise. Sony’s Stuart Whyte told VR Focus the story of Blood & Truth was set up as something London Studio “can continue to build on.” He added, “That’s, fingers crossed, where we’re planning on going next.”

With only one entry, Days Gone has yet to establish itself as a franchise. However, developer Bend Studio is likely to return to its virus-plagued world, considering Days Gone became Bend’s best-selling game ever after only a month, according to NPD. Director Chris Reese even suggested there may be more to come, telling GamesRadar, “This is a world that we want to keep breathing more life into, and explore many, many different avenues.”

Astro Bot is returning later this year with Astro’s Playroom, a non-VR pack-in game for PlayStation 5 that demonstrates the features of the console’s DualSense controller.

A smaller-scale spinoff, Marvel’s Spider-Man: Miles Morales, will be released as Sony’s premier PlayStation 5 launch exclusive this holiday. Insomniac, which was acquired by Sony following the release of Spider-Man, has already hinted at a proper sequel.

A God of War sequel has not yet been confirmed, but it’s hard to imagine Sony’s Santa Monica Studio isn’t working on the series’ next entry. The 2018 reboot was a massive critical and commercial success; it holds a 94 on Metacritic and has sold over 10 million copies as of May 2019.

The series’ next entry, Gran Turismo 7, has been announced for PlayStation 5. There’s no release window at this time.

The future of Sony’s long-running karaoke franchise isn’t promising, as all the SingStar servers were shut down earlier this year. Developer London Studio has since moved on to creating PSVR games, including VR World and Blood & Truth.

The brainchild of PS4 and PS5 lead system architect Mark Cerny, Knack and its sequel failed to garner the acclaim bestowed upon many of its PS4-exclusive contemporaries. Despite the PlayStation community’s (partially ironic) calls for a new entry, there’s been no word on a third Knack.

Uncharted 4 may have been the end of Nathan Drake’s story, but it probably won’t be the last we see from Sony’s beloved action-adventure series. Uncharted games combined to sell over 41 million copies as of 2017, and rumors suggest a new development team within Sony is working on a new entry, though this remains speculative.

Either way, the series will continue on the big screen with a Tom Holland-led movie adaptation.

A sequel, Horizon Forbidden West, was recently announced for PS5, with a target release window of 2021. The original, meanwhile, was recently ported to PC.

While not an entirely new game, 2016’s Ratchet & Clank reboot integrated enough new ideas into the original’s blueprint for us to consider it its own entry. The next mainline game, Rift Apart, is currently in development for PS5.

Given Ghost of Tsushima’s breakout success, a sequel is the safest bet for Sucker Punch’s next project, though the developer hasn’t ruled out a return to Infamous.

Similar to Infamous, Killzone’s future has grown more uncertain following the launch of its developer’s newer, more successful IP; Horizon Zero Dawn had sold “well over” 10 million copies by February 2019, and Guerilla Games is currently working on a sequel.
In 2017, studio co-founder and current head of PlayStation Worldwide Studios Hermen Hulst told Interactive “it’s too early” to announce “whether or not we’ve put a permanent period behind [Killzone].”

Original Sly Cooper developer Sucker Punch passed the baton to Sanzaru Games with Thieves in Time. Sanzaru has since been acquired by Oculus, while Sucker Punch has moved on to Infamous and Ghost of Tsushima, adding to the uncertainty of Sly’s future.

Sony’s car combat series skipped the PS4 generation, and there’s no indication the company is looking to bring it back for PS5. Should the TV adaptation revitalize interest in the franchise, perhaps Sony would consider a return to Twisted Metal.

*Wipeout Omega Collection, a remastered bundle of Wipeout HD and 2048, was released for PS4 in 2017.

The studio responsible for Wipeout, Sony’s Studio Liverpool (fka Psygnosis), was shuttered in 2012, six months after the release of Wipeout 2048.

*A PlayStation Vita spinoff, Burning Skies, was released in 2012.

If Resistance were to return, it wouldn’t come from regular series developer Insomniac; the studio’s CEO, Ted Price, said in 2012 it was “not moving on with the Resistance franchise.” Price could have a change of heart, or Sony could task a different studio with developing a potential Resistance 4.

*An RC car spinoff was released the following year for PS3 and Vita.

Series developer Evolution Studios closed in 2016. The development team later joined Codemasters, which went on to create the MotorStorm-inspired Onrush.

*After years of promise, a remastered version of Patapon 2 came to PS4 in January.

Sony shut down SOCOM developer Zipper Interactive in 2012, and there’s been no word on a potential new entry since.

*Remastered versions of LocoRoco and LocoRoco 2 were released on PS4 in May and December 2017, respectively.

Bend Studio created six Syphon Filter games between 1999 and 2007 before moving on to other projects. However, Syphon Filter lived on through Bend’s most recent game, Days Gone, which featured an easter egg suggesting the two exist in the same universe (via GamesRadar).

*There have been several spinoffs since the release of Ape Escape 3 on PS2 — the most recent being 2011’s critically panned PlayStation Move: Ape Escape.

A new Ape Escape, or perhaps a remake, was seemingly teased last year. Months later, during an interview with Siliconera, Shuhei Yoshida acknowledged “the voices of many people asking for a new Ape Escape title,” but fell short of announcing any future entries.

*Multiple Jak spinoffs have been released since Naughty Dog’s last proper installment, including Jak X: Combat Racing in 2005 and Jak and Daxter: The Lost Frontier in 2009. A bundle of the mainline trilogy (plus Jak X) came to PS4 in 2017.

Naughty Dog’s Arne Meyer told IGN in 2014 that a new Jak is “never off the table,” though the studio’s focus is on “narrative-driven games with strong characters.” In the six years since, Naughty Dog has released Uncharted 4 and The Last of Us Part 2, suggesting that, at least for now, that design philosophy is still in place.

*A PS4 remaster of the original was released in April 2017.

A Japanese mobile spinoff was announced in 2016, though it has yet to be released and isn’t listed on the website of developer ForwardWorks.

What do you think of Sony’s first-party output? Which series on this list surprised you most? Let us know in the comments, and be sure to vote in the poll below!

You can also check out our previously published analyses of Microsoft and Nintendo’s first-party outputs.

Jordan is a freelance writer for IGN.