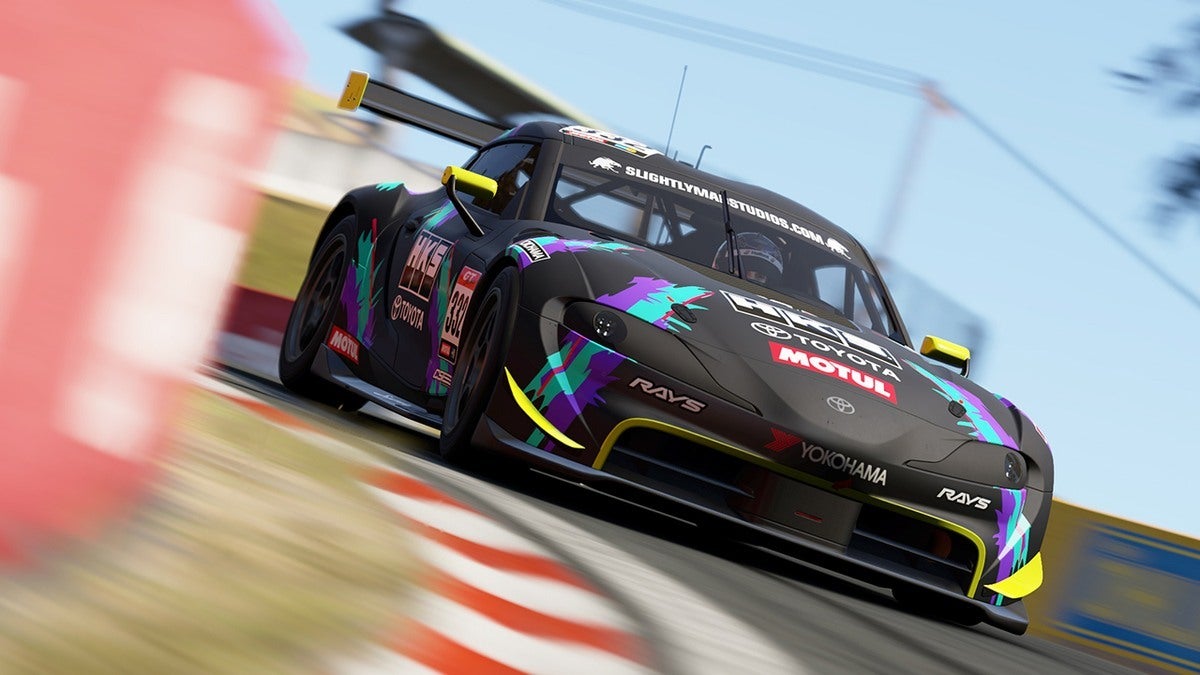 Project CARS 3 is a racer so fundamentally different from its immediate forerunners it’s bordering on unrecognisable. It abandons the sim racing sensibilities and adopts a radically different driving feel and a new career mode mostly made up of snack-sized racing and driving challenges. There’s never a time when it feels like an actual sequel to Project CARS 2 – and that is disappointing.

Slightly Mad Studios hasn’t just sanded the edges off its previously stoic simulation experience; it’s smashed it to bits and reassembled it using two-thirds of the pieces, filling the gaps with stuff snapped off other racers. There are times when it appears more like a mobile spin-off, and other times where it seems like somewhat of a spiritual successor to the developer’s own pre-Project CARS racer, Shift 2: Unleashed. The upshot isn’t necessarily a bad racing game, but it’s one with a real identity crisis that’s hamstrung in a number of baffling ways compared to its excellent predecessor.

Project CARS 3 ditches the race driver-for-hire model for a 10-tier curated experience stretching from road cars to hypercars, and race cars to faster race cars. Gone is the ability to work your way through individual championships, replaced with a shotgun spray of fairly shallow five-or-so minute events. XP is accumulated, small smatterings of cash are awarded, and boxes are checked. The end result heavily resembles 2019’s Grid and, if you’re a fan of that game’s easy-to-digest format and zippy, stylised take on motor racing, you may be content with this. There’s also an asynchronous ‘Rivals’ mode along the lines of the identically-named mode that’s been doing the rounds in Forza games for many years, and it pilfers the GT Sports approach to scheduled online racing (which, admittedly, GT Sport lifted from iRacing in the first place). That said, if you remain keen on the meaty race weekend atmosphere of Project CARS 2, you should definitely keep playing Project CARS 2.

[poilib element=”quoteBox” parameters=”excerpt=The%20end%20result%20heavily%20resembles%202019%E2%80%99s%20Grid%20and%2C%20if%20you%E2%80%99re%20a%20fan%20of%20that%20game%E2%80%99s%20easy-to-digest%20format%20and%20zippy%2C%20stylised%20take%20on%20motor%20racing%2C%20you%20may%20be%20content%20with%20this.”]The races are pretty typical of the catch-the-rabbit style of racing that works in most other arcade racers and semi-simulations; that is, sprint from last to first in a few laps. You can generally gobble up half the field by the first corner. There are a few other event types, like a block smashing event type akin to those you’d find in Dirt games, and two slightly different time trials that would be more fun if they let you spend more time lapping continuously and less time hammering through menus for another shot.

It rapidly becomes a bit of a grind, though, and the initial payouts are a little too stingy to completely support the number of cars you’re asked to continuously buy to complete specific events. Moving up and down tiers with a single car is a little inelegant, too; if your car’s not currently eligible you have to shuffle all the way back to the main menu, which is ill thought-out.

Each event has a trio of objectives to meet in order to unlock further events, many of which are straightforward enough to be completed without really paying attention to them. Some are overtaking quotas and some are drafting challenges. Some combine drafting and overtaking, but I can never get those ones to register. Others are often related to perfecting corners, Project Gotham-style. Corners are now marked with digital indicators for entry, apex, and exit à la GT Sport, though that can be toggled off. It is arguably a better solution than conventional racing lines but the braking markers are regularly too cautious considering how effectively overpowered the braking seems.

Access to higher tiers requires a lot of completed objectives, though you can also buy your way directly into tiers with in-game cash. It borders on pointless unless you’ve also got the adequate driver level and cash to splurge on an eligible car, but with enough upgrades even entry-level cars can compete and win in the top tiers.

You can upgrade your first ride to take on the best Project CARS 3 has to offer, with performance and visual customisation featured for the first time in the series. Stuffing enough upgrades into a Tommi Mäkinen Edition Lancer that it can go toe-to-toe with a Bugatti Chiron has a certain charm to it reminiscent of the original Gran Turismo and the great many games it subsequently inspired, but it feels pretty weird in what used to be a realistic love letter to the otherwise regulated world of authentic racing. Road cars can also be turned into race cars via a race modification feature, the kind you may recall from the original Gran Turismo games (or the ‘Works Upgrade’ option in the Need for Speed Shift games).

Upgrading cars opens up tuning options, but you need to pay in-game credits to unlock tuning slots to create new set-ups, which feels like a bizarre piece of mobile design airdropped into a PC and console game. Tuning feels pretty tangential this time around anyway; the AI can be generally thumped without any tweaking.

Visual customisation doesn’t offer the same freedom as the deep, custom livery editors available in GT Sport, the Forza series, or Need for Speed; it’s more in line with Grid or Driveclub, with pre-set patterns and decals to choose from. I will say the choice of tyres is awesome, though – I wish all racers had such an extensive selection of brand-name tyres.

On the topic of tyres, of course, is where the rubber meets the road: Project CARS 3’s handling. It is radically different to Project CARS 2, to the point where it feels like an entirely different game. For better or for worse, Slightly Mad Studios has reinvented Project CARS as a mainstream, casual-friendly racer. Grippy up front, loose at the rear, and hard-braking, Project CARS 3 feels surprisingly like Grid on a gamepad. It’s accessible and forgiving, and you can handily out-brake the AI by overdriving into the corners and trusting the boosted braking to pull you up just in time for turn in. The simple, arcade-inspired feel is fun enough to hustle through circuits with for a while, but I’m not hooked. It’s certainly not what I was expecting and it feels like much of the nuance between the cars I tested is now gone. There’s less invisible handholding with a wheel, which requires smoother inputs and more delicate throttle to prevent spearing off track, and both wheels I tested were pleasingly plug-and-play and free of the settings nightmares that plague the likes of Assetto Corsa Competizione. However, they don’t really quite feel like the right tools for the job for what’s essentially now a quickfire couch racer.

The AI is bizarrely uneven, too, depending on track and car combinations. On some of the point-to-point races early in the career I was pinballing off walls and still trouncing the highest-level legendary AI in low-powered road cars by mammoth margins, and being able to overtake 32 legendary AI in one lap of Hockenheim during a thunderstorm seems a bit daft. On other occasions, however, they’re capable of seemingly supernatural grip levels – overtaking around the outside like they’re on rails – and far harder to catch.

[poilib element=”quoteBox” parameters=”excerpt=On%20some%20of%20the%20point-to-point%20races%20early%20in%20the%20career%20I%20was%20pinballing%20off%20walls%20and%20still%20trouncing%20the%20highest-level%20legendary%20AI%20in%20low-powered%20road%20cars%20by%20mammoth%20margins.”]In terms of those car and track combinations, beyond a handful of inclusions and omissions, things haven’t drastically changed from Project CARS 2. The streamlined car classes, however, are a massive letdown – and some are just an absolute mess. In Project CARS 2 the car roster was divided up into a host of individual categories, grouping cars in sensible ways and ensuring you’d be facing logical competition out on track. A lot of Project CARS 3’s classes remain exclusive enough to ensure that still happens, but others are a grab-bag of mismatched metal that looks like absolute nonsense out in action. You can’t really conduct a simple modern touring car race without ’71 Escort RS1600s, ’66 Mustangs, ’99 Skyline R34s, Caterham Sevens, and a handful of World Rallycross Championship Ford Fiesta Lites turning up on the grid. The off-brand GT3 class – dubbed GT A in Project CARS 3 – now sprinkles V8 Supercars and Sesto Elementos amongst GT3 cars. The GT4 class has a bloody NASCAR Fusion in it. It is such a weird problem to have.

Sadly, it’s far from the only one. While the custom event functionality remains, it’s definitely not as fully-featured. Laps are limited to 99, so Indy 500s and Bathurst 1000s are out. Le Mans is out, and so is rallycross. Weather slots have been reduced from four race conditions to just starting weather and finishing weather, so you can’t have races that begin dry, rain, and then dry out again. That’s almost moot, however, because tyre strategy isn’t a factor anymore and there are no pit stops. Mechanical damage is out, too. Cosmetic damage still features but it regularly looks weird and awful, even when tickling the ultra settings on PC. Annoyingly, damage persists after restarts so broken windscreens stay broken even if you retry an event, and the only way to fix them is… crash again. Project CARS 3 seems to have a more saturated palette than the previous instalment, meaning colours pop more, but in terms of detail its lags some distance behind the likes of Forza or GT, and its wild weather isn’t a patch on the F1 or Dirt games.