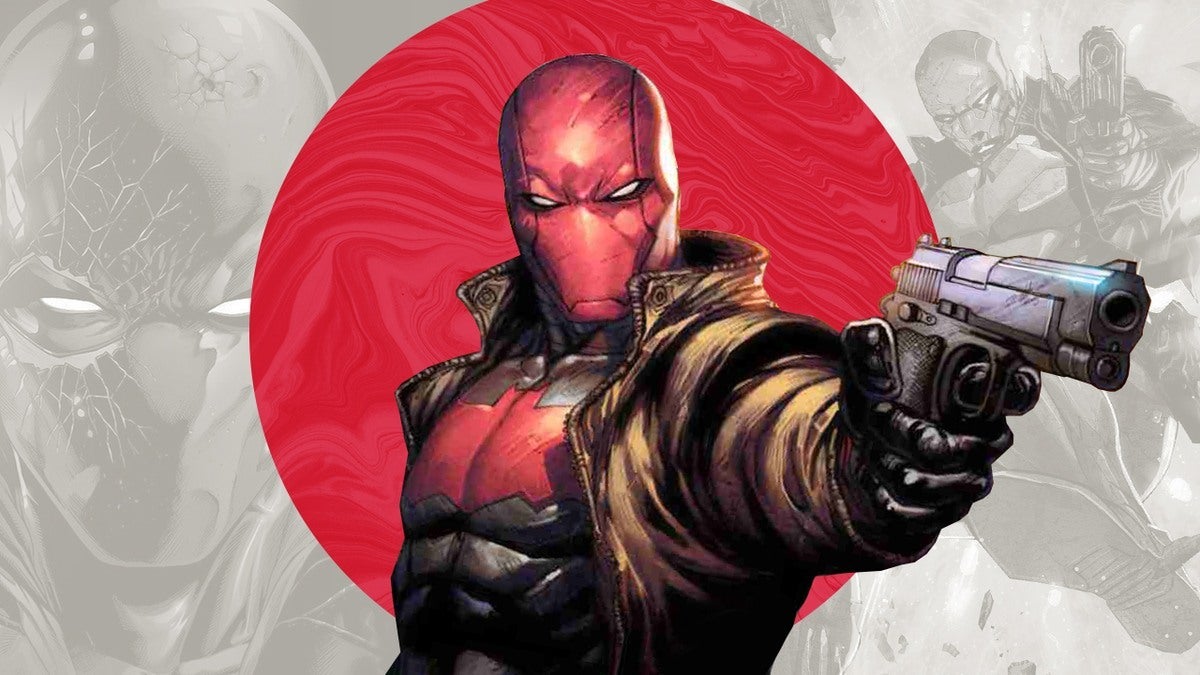 Jason Todd, Batman’s second Robin who is now known as the Red Hood, is one of the most badass and tragic characters in the DC Comics library. Though he can be described as “Batman With Guns,” he’s so much more, so with the news that Red Hood will be a playable character in the upcoming Gotham Knights game and that Red Hood will be making his debut on Season 3 of Titans, we’re pulling back the hood to cover everything you need to know about Batman’s fallen former sidekick.

Who is the Red Hood? Is he a good guy or a bad guy? Why does he share a name with a Batman villain? We’re covering all that and more. Here’s a list of all the topics we’ll be discussing:

Who Is Red Hood?

Jason Todd, better known as the Red Hood, is a vigilante anti-hero who fights to protect Gotham City with his dual-pistols and quite a bit of pent-up rage. As a former Robin to Batman, Red Hood is a part of the Bat-family, a network of street-level heroes with ties to the Dark Knight, although his loner attitude, penchant for violence and use of firearms often puts him at odds with the likes of Batgirl, Nightwing, and Batman himself.

The Red Hood has a long history in DC Comics canon that goes back decades, and as often happens with comics, there have been numerous revisions, updates, and retcons to his story over the years. It would take one of those walls covered in photos and charts and yarn to explain every last detail, so instead we’re going to cover the general highlights of his origin that have remained consistent.

After Batman’s first Robin, Dick Grayson, flew the nest, Batman recruited Jason Todd to be his next Robin after he caught him trying to steal the wheels off the Batmobile. Jason may have resembled Dick, but right away it was clear that he couldn’t be more different. Whereas Dick was upbeat and always wore a smile, Jason was angsty, bull-headed, and brash — qualities that would eventually lead him down a dark and tragic path.

While on a personal quest to find his long lost mother, Jason ran afoul of the Joker, who captured, tortured, and seemingly killed Robin 2.0 by beating him with a crowbar and leaving him behind with a timed bomb to finish the job. (Whether Jason ultimately lived or died was actually voted on by DC fans!) Batman was too late to save poor Robin, and losing him has become what the Caped Crusader considers to be the greatest failure of his life.

But this is comics, where death is like a revolving door, and years later Jason Todd was brought back to life thanks to Talia al Ghul restoring him with the resurrecting power of the Lazarus Pit. It wasn’t long before Jason learned that the Joker was still alive, and so he cursed Batman’s name for not killing the villain who took the life of his sidekick.

Believing Batman’s methods for delivering justice were too soft and ineffective, Jason decided to take up the mantle of the Red Hood so he could punish evildoers with his own brutal sense of justice. The Red Hood was originally a disguise worn by the Joker before he was transformed into a laughing maniac. Jason chose to take over the moniker so he could own what the Joker did to him and use it to become the Joker’s destruction.

This set the Red Hood on a path to become a brooding, bitter anti-hero who often crosses lines that others in the Bat-family won’t. The mere fact that he uses guns is a big middle finger to Batman, who has sworn them off as the tool of the enemy. That said, Jason doesn’t execute bad guys willy nilly like Marvel’s Punisher; he usually digs down deep to find the restraint not to become an executioner. He even spared the Joker’s life when he finally got the chance to take his revenge, showing that despite the tragedy he’s suffered, there’s still a spark of light within him that keeps him aligned with the side of good. (Although, given the ever-changing nature of comics, a recent development has seen Red Hood go darker than ever before.)

Though Red Hood has no superpowers, he does have a vast array of talents thanks to being trained by Batman. He has world-class strength, stamina, athleticism and acrobatic skills. He’s been trained in detective work and combat strategy. He’s an expert in hand-to-hand fighting and all manner of high tech gadgets.

Though Jason was trained as Robin to use non-lethal weapons like Batarangs, upon becoming Red Hood he sought out training by the world’s greatest marksmen so he could kill any target, making him a master of firearms.

His signature weapons are a pair of handguns. He also keeps a dagger on him for close-combat fighting.

Red Hood’s helmet not only conceals his identity but contains a radio transmitter, plus it’s armored to protect his head.

Though Red Hood tends to march to the beat of his own drum, that hasn’t stopped him from teaming up with some of DC’s other heroes. Red Hood’s teams include the Challengers From Beyond, the Outlaws, Teen Titans, and Young Justice.

Jason Todd/Red Hood has been featured in various movies, TV shows and games. Over the years, he’s been mentioned in passing (often for a joke in Teen Titans and Teen Titans Go!) or popped up as an Easter egg (like in Harley Quinn when Joker reminds Batman about how he killed his sidekick), so we’re going to focus on the meatier appearances.

In the animated film Batman: Under the Red Hood, Jason Todd (voiced by Jensen Ackles) returns years after his apparent death under the guise of the Red Hood. His identity remains a mystery to Batman for a bulk of the film, but after it’s revealed, the two have a dramatic confrontation where Jason confronts Batman over what happened. This is the best thing to watch if you want to get the full story of the Red Hood told in compelling fashion.

In the live-action Titans show, Jason Todd (played by Curran Walters) plays a foil to Dick Grayson. Dick had left Batman behind, so he’s not exactly happy to see Jason show up and tell him that he’s Batman’s new sidekick. Jason fights alongside the Titans for a while, but his cavalier attitude and violent tactics bring a lot of friction to the team. After a falling out with the group, a disillusioned Jason quits, setting up his return as the Red Hood in Season 3.

In the video game Batman: Arkham Knight — spoilers! — the titular Arkham Knight is revealed to be none other than Jason Todd. Jason’s backstory was streamlined and tailored to fit the Arkham universe. It became much more focused on how the Joker not only beat him near to death but kept him captive to completely break his psyche, going so far as to brand his cheek with the letter J for Joker. This version of Jason is much more extreme because his plan for revenge on Batman sees him assemble an army and try to take over all of Gotham City as a super villain. In the final act of the story, Jason transforms his Arkham Knight armor so the helmet turns red, giving him his signature look. Then in the post-game DLC, he gives up the Arkham Knight identity to become the Red Hood we’re more familiar with.

Finally, the Red Hood will be a playable character in the Gotham Knights video game alongside Nightwing, Robin (Tim Drake), and Batgirl (Barbara Gordon).

Joshua is Senior Features Editor at IGN. If Pokemon, Green Lantern, or Game of Thrones are frequently used words in your vocabulary, you’ll want to follow him on Twitter @JoshuaYehl and IGN.

Wed Aug 26 , 2020
Janelle Monae discusses the importance of representation for blacks in the media. Source link