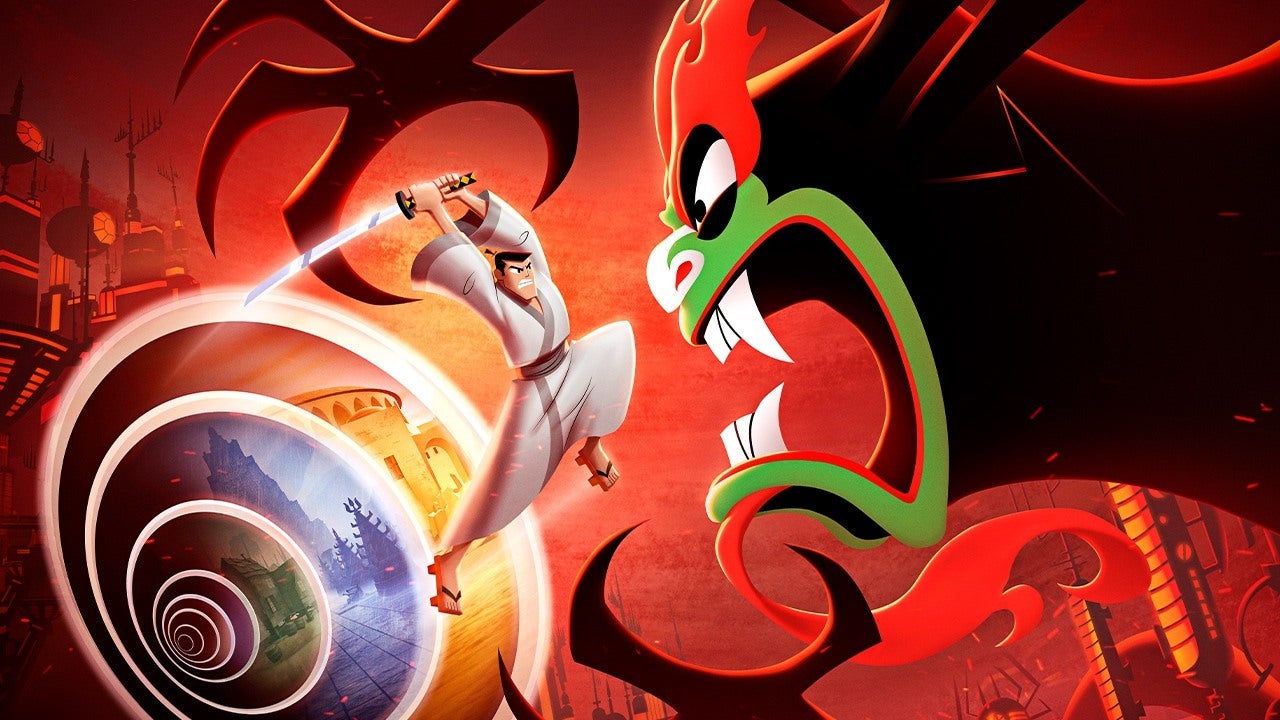 A definitive ending to an excellent story is a truly precious thing. That’s part of why Samurai Jack’s return for a final season in 2017 was so refreshing, as it capped off the legendary cartoon show with an appropriately epic and conclusive sendoff. Samurai Jack: Battle Through Time makes a risky choice, then, by attempting to squeeze one more thrilling adventure out of the series post-finale, but it handles that responsibility with care – and manages to be an enjoyable trip into the past of the action game genre in the process.

For those who weren’t tuning into Cartoon Network in the early 2000s, Samurai Jack is about the titular warrior fighting to return to the past and slay the evil wizard Aku. Battle Through Time cleverly posits that Aku had one more trick up his sleeve: he interrupts Jack’s trip back through time and forces the samurai to relive his most exciting battles.

The setup serves as a convenient way for the developers to pick and choose their favorite moments from the series and remake them as scenarios with you in control. And the ends justify the means in this case: it’s fun to revisit fan favorites like The Scotsman and dog explorer Sir Rothchild alongside less well-known characters like the Imakandi tribe and the Witch Hag. Even the common fodder enemies you’ll regularly hack through are all straight from the cartoon. Everything feels authentic to the source material, complete with their original voicework and charming recognizable mannerisms.

[poilib element=”quoteBox” parameters=”excerpt=It%E2%80%99s%20fun%20to%20revisit%20fan%20favorites%20like%20The%20Scotsman%20and%20dog%20explorer%20Sir%20Rothchild.”]That dedication to replicating the show stretches even further: The first thing you see when loading up Battle Through Time is the signature opening speech from Aku; Actual animation from the episode in question bookends the campaign, and other clips from the show occasionally pop up and highlight just how well the 3D graphics mesh with what aired on TV. Each level takes inspiration from the episode it’s based on, changing Jack’s appearance and the environments to mirror the show’s evolution as the campaign goes on.

When Battle Through Time does go into the 3D art style full time, every character and location serves as a stunning recreation of Samurai Jack’s world. It’s been a long time since cel-shading was the peak of making games look like cartoons, and the angled and stylized character models on display here really add dimension to the cast. It’s not quite at the (admittedly high) level of Ubisoft’s South Park games in terms of flawlessly recreating the look of the cartoon, but it’s right up there, making the whole campaign feel like an extended episode of the show.

[poilib element=”quoteBox” parameters=”excerpt=It%20reminds%20me%20of%20PlayStation%202-era%20action%20games%20more%20than%20modern%20trendsetters%20like%20Bloodborne.”]Battle Through Time succeeds in capturing the source material, but its choices when it comes to gameplay are wholly original – at least in terms of 2020. Its combat systems and campaign structure turn the clock back just as far as Aku does, reminding me of PlayStation 2-era action games like Mortal Kombat: Shaolin Monks and the original God of War more than this generation’s trendsetters like Bloodborne.

This retro action style is fitting for a TV show that emerged during the same period as a deluge of licensed products imitating gaming’s greatest hits. If you’d told me Battle Through Time was actually a high-quality remaster of a lost GameCube classic, I’d probably have believed you. It plays like nothing else available today, and the fast-paced sword swinging activates old reflexes I thought I’d long forgotten.

This is an eight to 10-hour linear affair featuring arenas full of enemies, giant boss fights, a shopkeeper that inexplicably stays one step ahead of the player, and a score-based ranking system. It all feels like a spot-on replication of a bygone era, but it doesn’t feel outdated. The graphics and the intricate combo system are totally up to date, leading to a complete package that suggests a return to form rather than a crusty selection from the bargain bin.

Speaking of combat, there are serious advantages to looking backward, especially if you’re tired of the constant parades of Soulslikes the action genre has become in recent times. You can button mash through the fights on lower difficulties, but the combat system supports parries and combo moves that add nuance without going full Dark Souls, and when cranked up you’ll find that there can be just as much challenge in Battle Through Time’s combat arenas as there is in any area guarded by a fog door.

[poilib element=”quoteBox” parameters=”excerpt=The%20core%20combat%20is%20designed%20to%20thrill.”]However, I will admit that, much like other games of its era, most will enjoy Battle Through Time more as a breezy adventure than a test of skill. The core combat is designed to thrill with everything from the various ways Jack cuts through robotic opponents to the crunch of the various super moves. Each weapon you wield has a set of combo strings to master, and there are reasons to use everything. Clubs can tear through rock and bone more easily, and the bo staff can take out hordes of foes at once. However, nothing compares to the thrill of slashing enemies one at a time while wielding Jack’s magic sword.

Of course, because Battle Through Time looks back for its design, it also brings forward some problems best left behind. For example, instead of growing stronger through leveling from regular experience gains, you must purchase upgrades with several different currencies picked up from enemies. Awkwardly, some of these resources seemingly stopped dropping a few levels before the end, locking me out of some of the more elaborate upgrades. Even if the currency was available, upgrades have to be unlocked in order, meaning that the complexities of the counter system and longer combo strings were trapped behind useless expansions to an already generous weapon inventory.

There are also a few bizarre quirks, like how Jack will only climb up scalable surfaces one rung at a time. In these moments, the titular samurai looks less like a deft warrior and more like a nervous beetle crawling for the first time. The movement is so slow that it’s always preferable to awkwardly jump up the sheer cliffs then navigate them as intended.

Willem Dafoe’s Joker Is Terrifying In The Batman Fan Art