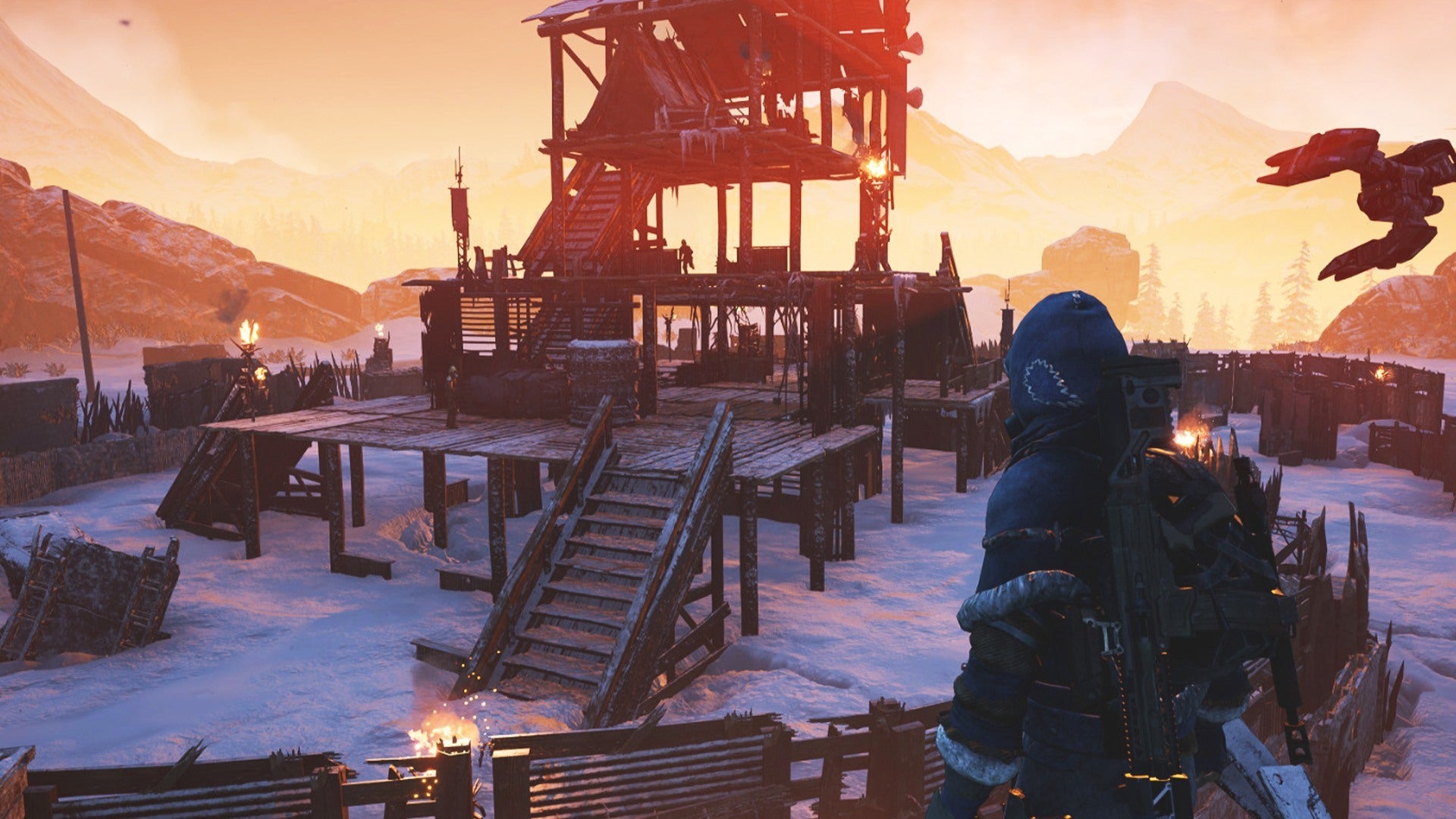 This is the second time I’ve played Scavengers, the third-person PvEvP “co-opetition” shooter from Midwinter Entertainment, led by Halo veterans Josh Holmes and Mary Olson. The first time, I came away very impressed with the mix of gameplay on offer. In its most basic form, Scavengers is a more evolved version of Halo’s Warzone Firefight – building off of its large-scale player-versus-player-versus-enemy formula with a fleshed-out world, a lot more players, and crafting elements. This second play session over a year later showed off a few smart design improvements and left me even more convinced that Scavengers could be exactly what players burned out on either battle royale games or traditional arena shooters are looking for, because it’s a refreshing mix of both.

The biggest and most obvious change is the sheer scale of the game now. Scavengers is up to 60 players per match – in 20 teams of three – which has necessitated an upscale of the frozen, post-apocalyptic Earth play spaces as well. You’ll now battle in a nine square kilometer tundra (with occasional storms that necessitate you keeping yourself warm to survive), and there are more AI foes to contend with as well. In my experience, it felt pretty good – not too big or too small. We saw other groups of players around that we needed to keep an eye out for, but as we weren’t looking for a fight, we had enough distance that we weren’t forced to duke it out with them. Though we were nevertheless close enough that we most definitely could’ve if we’d wanted to.

And you just might want to, in fact. Another new addition to Scavengers since I last played it is the ability to bank resources. See, the whole goal of the match is to, yes, scavenge as many resources as possible and bring them back to Mother, the AI that runs the orbiting ship the remnants of humanity live aboard after an ice comet brought the Scourge, a virus that’s mutated many of Earth’s remaining fauna. In a convenient narrative twist, Mother has a bit of a competitive and sadistic streak, and so she sends competing teams down to see who can gather the most resources from the snow and ice storm-ravaged surface; there’s only one dropship, so you’d better be on it when it leaves. But you can now bank those resources at select upload points in the world, meaning you won’t lose everything if another team beats you down and takes what you have.

Those are the pieces of the PvPvE experience: you’ve got to watch out for Scourge-infected humans just as much as you do fellow non-infected competitors – not to mention bears and wolves – all the while gathering materials to upgrade your class weapon or craft items like grenades or armor. And by the way, there are eight player classes who each have custom weapons and special abilities.

I wasn’t able to bank any of our team’s resources in my match – nor was I able to get a vehicle, which is another addition to Scavengers during the past year – but we did make it to the dropship at the end of the match after clearing out some Scourge bases, sliding down snowy hills we encountered in order to move a bit faster. And that end-of-match dropship moment has changed too. Instead of just being an exit door, essentially, it’s now its own combat space, offering teams one last relatively close-quarters chance to duke it out for one last crack at upping your resource count to try and win the match.

We didn’t win, but we placed respectably. More importantly, I am now even more intrigued by and interested in Scavengers. It’s part co-op shooter, part survival, and part battle royale, and I’m incredibly impressed by it so far. It heads into closed beta near the end of the year before its Early Access release in early 2021.

Wed Sep 2 , 2020
The Top Chef host hit 50 this week and decided to celebrate on the beach. Source link