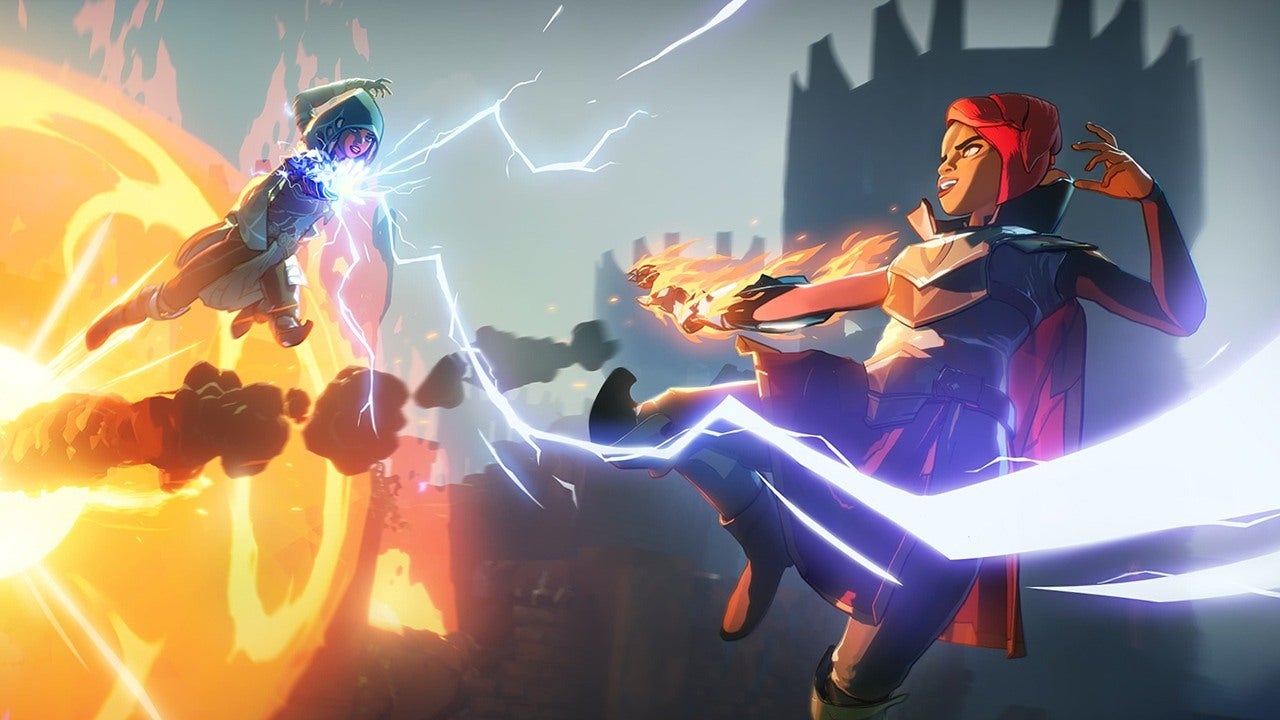 Standing out from the pack is harder than ever in an ever-more crowded battle royale genre. The kings of this particular hill are already free-to-play on a variety of platforms with years of updates and refinements under their belts, but the team at Proletariat may be onto something that can make a mark with Spellbreak. It’s pretty magical.

By swapping out the guns for spells and overhauling the theme, location, and progression format with a more fantastical and mystical vibe and a stylized art style that looks almost like a watercolor painting come to life in all the best ways, Spellbreak manages to feel both familiar and fresh all at the same time. At the end of the day, charging an ice spike with a zoomed-in camera might effectively be the same as a sniper rifle for example, but it certainly feels different when you’re a wizard instead of a soldier or… whatever you’re supposed to be in Fortnite.

Matches are quick and full of action, and that’s due in no small part to the fact that everyone begins with a pre-selected duo of powers from wearable class gauntlets. The Pyromancer, for example, can shoot fireballs and summon a wall of flames, whereas the Stoneshaper can send tremors through the ground to hit enemies and hurl giant boulders. It all feels very Avatar: The Last Airbender and I mean that in the best way possible. In total, there are already six total classes and they offer a ton of variety.

[poilib element=”quoteBox” parameters=”excerpt=You%20can%20combo%20spells%20together%3A%20hitting%20a%20tornado%20with%20a%20lightning%20bolt%20creates%20a%20super-charged%20storm.”]But that’s just a starting point, because your chosen class only determines the abilities on your dominant hand. You’ll also find additional gauntlets from the other classes during matches, letting you equip other class abilities. With the Tempest you can let out a burst of wind or deploy a swirling tornado, or with the Toxicologist you can shoot out a spread shot of poisonous blobs and create a toxic cloud. More importantly, you can combo spells together: hitting a tornado with a lightning bolt creates a super-charged storm. Factor in the environmental effects on top of all that, like ice attacks freezing the ground, and it adds up to the most dynamic and exciting battle royale gameplay yet. Conceptually, it feels like the same sort of shake up Fortnite delivered by letting you use its rapid building mechanics in the middle of a gunfight. And once fireballs land and lightning storms erupt, it’s an absolute sight to behold.

At first it was a bit jarring to not aim down the sights of an assault rifle as I peeked around corners, but to instead fling myself into the air while tossing fireballs. Once you get used to it, though, and put in a bit of practice, it feels buttery smooth, like second nature. (I’m sure I’m in for a short few rounds next time I go back to PUBG as I readjust to something closer to realism.) Spending as little time on the ground as possible can give you a huge advantage in combat since even if they miss you can still take splash damage from the ground around you if you’re near it.

[poilib element=”quoteBox” parameters=”excerpt=Spellbreak%20breaks%20from%20tradition%20in%20some%20important%20and%20sometimes%20aggravating%20ways.”]Many battle royale games are designed around a “blank slate” approach, in that no matter how many hours you’ve invested you will always start on equal footing with everyone else. All of your progression takes place within each while you loot and scavenge for gear. Spellbreak, however, breaks from that tradition in some important and sometimes aggravating ways. There’s still a gear curve as you explore the map and locate items, but your mage level and class level both increase gradually as you play and gain XP, adding an extra layer of progression to help reward you for your time directly.

As your Mage rank increases you’ll earn Gold, the in-game currency that you can also buy with real money, as well as basic cosmetics such as name plate backgrounds and badges. Class rank, on the other, hand has more tangible rewards. Once you get Pyromancer to rank 5 for example, a floating beacon hovers beyond you, glowing with flames, as a neat cosmetic. And once you hit rank 6 you get the Fortitude talent, which can summon a barrier bubble. In fact, every class has a talent it unlocks at ranks 1, 3, and 6. Grinding out ranks on classes you don’t even like though can feel pretty tedious.

Exacerbating the leveling tedium, you can be outclassed very quickly against other players that have already unlocked additional talents by investing more time than you. The playing field is no longer level if someone that’s been playing longer potentially has an edge in combat beyond their own skill.

Just like in other battle royales, you find gear by looting buildings, opening chets, and killing other players: boots that increase your speed, amulets that increase your max mana resource that’s used for hovering and spellcasting, belts that expand your max armor, and all manner of other magical items.

[poilib element=”quoteBox” parameters=”excerpt=The%20map%20is%20large%20but%20lacks%20visual%20variety.”]While the map is quite large in Spellbreak, it shrinks very quickly from an encroaching magical storm and you’ll usually only have around 35 to 40 players at a time; the max is only 42. I actually like the speed of matches and since characters move so quickly the map doesn’t feel as empty as it actually is. The issue, though, is it lacks visual variety. Even if someone were to spend dozens of hours exploring, I’d be surprised if they could close their eyes, drop somewhere random at the start, and actually identify where they’re at accurately. Mountains, ridges, forts, and general terrain are all almost identical no matter where you go, which is definitely a weakness.

Cosmetics are actually handled pretty fairly here. Just by leveling up your rank in each of the classes you start to unlock aerial smoke trails when you’re dropping, name plates, badges, emotes, and more. But for the limited-time epic and rare outfits or special emotes other than basic waves, you’ve got to pay the Gold price — that currency can either be earned slowly or purchased outright with real money. You can buy 600 gold for $5, 2,800 gold for $25, and so on, so you get a little more than 100 gold per $1 spent. This makes extra fancy Epic Outfits cost around $10-15, which is reasonable. Emotes and less rare outfits are just a few dollars in most cases. Wisely, Proletariat has thus far ensured that Gold can only be used to buy cosmetics and not ranks or other items, so there’s no way to buy more power. It’s also worth noting that at the time of this writing there is no Battle Pass available. Finally, a section of the menu called “Chapters” is greyed out — although the developers have indicated this will be used to deliver the lore bits.

Spellbreak also has something that you don’t see very often in a battle royale: a stellar soundtrack with sweeping fantasy themes and epic instrumentals to begin matches. I found myself listening to the main menu music often while writing this review. I know a lot of people turn off the music in battle royales so they can focus on not dying, but it’s so good here I found myself wishing it had more music during actual gameplay.

Finally, Spellbreak supports cross-play between PS4, Xbox One, PC, and Switch, although it feels like Switch owners will get the worst version here because the frame rate is far less stable and often dips below 30fps. Cross-progression is here as well, so even your save file carries across between versions of the game.

What AIM's REAL Plan Is In Marvel's Avengers | Screen Rant

Sat Sep 19 , 2020
The Advanced Idea Mechanics, better known simply as A.I.M., is one of the main forces battling against the Avengers in Marvel’s Avengers. In essence, the group is power-hungry. The super villainous group started off as a branch of HYDRA in WWII, though later became to be dissociated with the group. […]