Video games have the unique ability to put you in the shoes of someone else, which also means they have the ability to scare the crap out of you like no other medium. From the escalating psychological torment Silent Hill 2 throws your way, to the good old fashioned heart-in-the-mouth scares dished out the original Resident Evil, there are a lot of genuinely terrifying moments in video games. There are plenty to choose from, but we’ve whittled it down to ten of the best.

Though not a horror series in the traditional sense, the Tomb Raider series has leaned heavily into the fantastical and the supernatural, delivering its fair share of scares throughout the years. However, nothing came close to the appearance of the T-Rex in the Lost Valley level of the 1996 original. 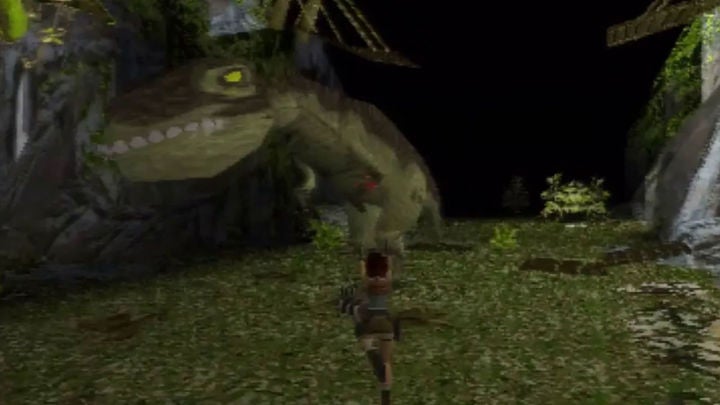 Even though you eventually knew it was coming, the thunderous footsteps and overwhelming size of the dinosaur, accompanied by that sudden, frantic, string-based score, still terrified every time.

The Half-Life games have always excelled at introducing new gameplay mechanics or enemy threats within each playable chapter, and one of the best took place in the zombie-infested town of Ravenholm. There comes a moment where the player is trapped on a rooftop waiting for a slow-moving elevator to reach the top floor while a strange, awful howl echoes in the distance. Because of that slow elevator sequence, Valve decided it would be best to introduce a new enemy type not found in any previous Half-Life game: the fast zombie.

The fast zombies were not only horrifying to look at, but they were incredibly agile and unlike anything Half-Life 2 previously set up for player expectations. Stranded on the rooftop while the horrible sounds of howling, grotesque gargling noises and witnessing the pipes attached to the building’s structure rumble as the fast zombies climbed their way up to lunge right at the player’s face made that elevator’s eventual rise to the top floor feel like an eternity.

The original Silent Hill trilogy all had nail-biting moments, but one of the most terrifying – and abstract – was the cursed mirror in Silent Hill 3. Located in the nightmare version of Brookhaven Hospital, there’s one particular storage room that Heather can enter only for the soundscape to turn into a thumping heartbeat. 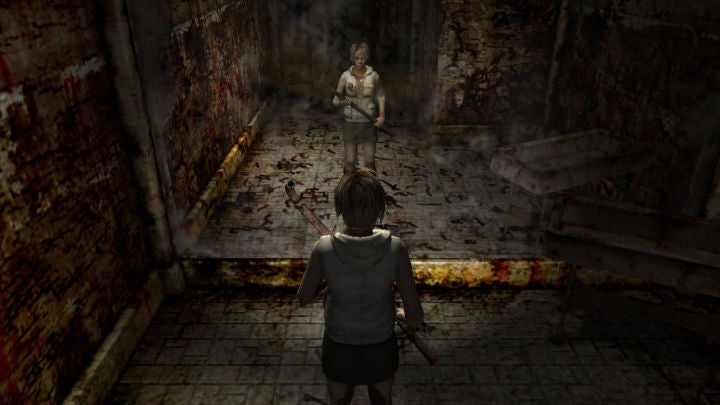 Staring at the mirror, the player will begin to see what looks like blood vessels crawling all over the floor inside of the reflection, which begin making their way inside of a sink before spilling out into the world. The door leading to the exit is locked as the floor, Heather’s reflection in the mirror freezes in place, and the entire room is engulfed with what appears to be mutating flesh and blood before it eventually kills Heather. It’s one of the most eerie moments in the Silent Hill series, and one its fans will never forget.

Some horror games make situations more intense by providing you with barely any weapons. F.E.A.R. changes things up by giving you the means to mow down countless supersoldiers, but routinely reminds you that no weapon can protect you from true terror. Players learn this early on as they witness hallucinations and shadowy figures scampering just out of range that no amount of bullets or reflex time can fend off. But the most terrifying moment in F.E.A.R comes when you’re climbing down a seemingly harmless ladder, and suddenly you’re face to face with Alma, the series’ iconic creepy little girl, standing only inches away. This event is particularly devious as the player is essentially helpless while on the ladder, and while frantically sliding down to regain control, they hardly notice another specter walking towards them on the catwalk below.

It’s one thing to program an effective jump scare, but what about dread? Dread can be a tougher mood to set, but Dead Space accomplished it with little more than a hole in the side of a ship and one mean-ass tentcacle. Sure, the first time the player passes the hole, they’re immediately on guard. But when nothing pops out the second time? Or the seventh? 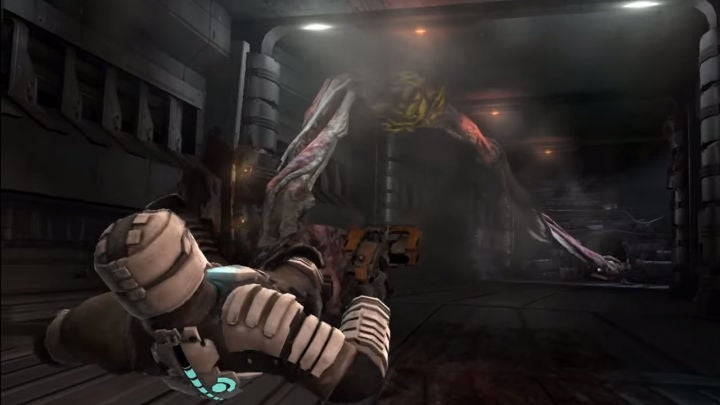 The hole becomes just another part of the background as Isaac retraces his steps again and again trying to put the Ishimura aright. Until, that is, the jack-in-the-box finally POPs and the player’s treated to an terrifying quicktime event, then has to make some precision shots or risk becoming become cthulu-food.

The first few minutes of Silent Hill are a masterclass in game design in the way it uses nearly every aspect of gameplay to crank up the tension bit by bit. Thick fog obscures its environments, while a low electronic hum and your own footsteps are the only sounds to be heard. When protagonist Harry Mason chases a ghostly figure down an alley, Silent Hill’s camera suddenly becomes more dynamic—sweeping down low then creeping back up again as if from the point of view of something watching. Your environment inexplicably becomes darker, the walls around you become blood-splashed rusted metal, mutilated corpses litter the ground. A siren sounds off in the distance, and knife-wielding creatures start to encroach. The controls, clunky at first, now underscore how nearly impossible it is to fight these monsters, and that there’s no escape. And that’s all in the first five minutes.

4. The Xenomorph Can Actually Hear You – Alien: Isolation

Ever since that baby xenomorph burst through Kane’s chest in the mess of the Nostromo, horror movies and sci-fi films have never been the same. While Alien: Isolation wasn’t as revolutionary as its motion picture progenitor, it was the first Alien game to successfully adapt the survival horror heart of the first movie. And to survive on the Sevastopol, the player needed to not only master evasion but silence itself. Xenomorphs have super sensitive hearing, and while a locker might hide the player from its predatory gaze, the loud exhale or celebratory cheer (from the comfort of your terrestrial couch) after surviving a close call could lead to an unexpected headbite and respawn if loud enough. 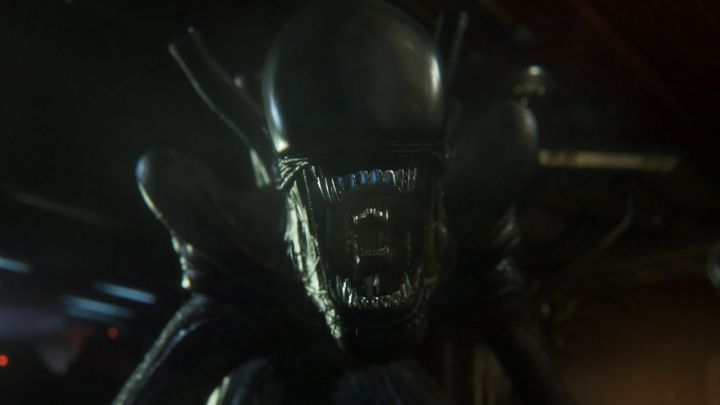 But How did the alien hear you in the first place? Well, it’s listening through the controller mic. And those early deaths that come when the Xeno re-enters right after you thought you were in the clear are some of the most frightening scares in the game- that is, until the player realizes their bugged and they need to stay quiet to survive.

The lead up to your first encounter with a licker in Resident Evil 2 signposts exactly what you’re in for. Upon discovering a corpse very early into your journey into the Racoon City Police Station, you’re notified that its “head is missing. It seems to have been twisted off”. The cut scene where the licker reveals itself on the ceiling, all brains, teeth, and tongue, is bad enough, what’s worse is when it drops off the ceiling and you’re forced to face it, in that uncomfortable fixed angle, with only a handful of bullets. Truly, the stuff of nightmares.

2. That Doggie in the Window – Resident Evil

You’re casually walking down an empty hallway in the original Resident Evil, completely devoid of zombies, and BAM – a zombie dog bursts through the window and absolutely ruins your day. The initial shock of this particular moment is so great, you’ll never walk past a window in comfort for the rest of the game, which leads to a sense of gnawing unease throughout.

The greatest thing about PT is the way everything slowly builds up to this one big scare. While its dimly lit house interior is creepy, it’s too linear to make you feel at risk of a jump scare from some shadowy corner. But as you keep walking through PT’s continuous loops through the house’s corridors, things get slightly more disturbing each time and the tension starts to build, and build, and build, until finally… the words “look behind you,” can barely be made out through the radio static… you oblige, and you meet Lisa, up close and personal. Try not to scream.

And those are our favorite scares in gaming – what made you shriek the loudest? Let us know in the comments, and for more scarily fun reads, check out how PT became a modern urban legend in its own right, or

New Marvel Book Reveals What Black Panther’s Shuri Has Been Up To After Avengers: Endgame