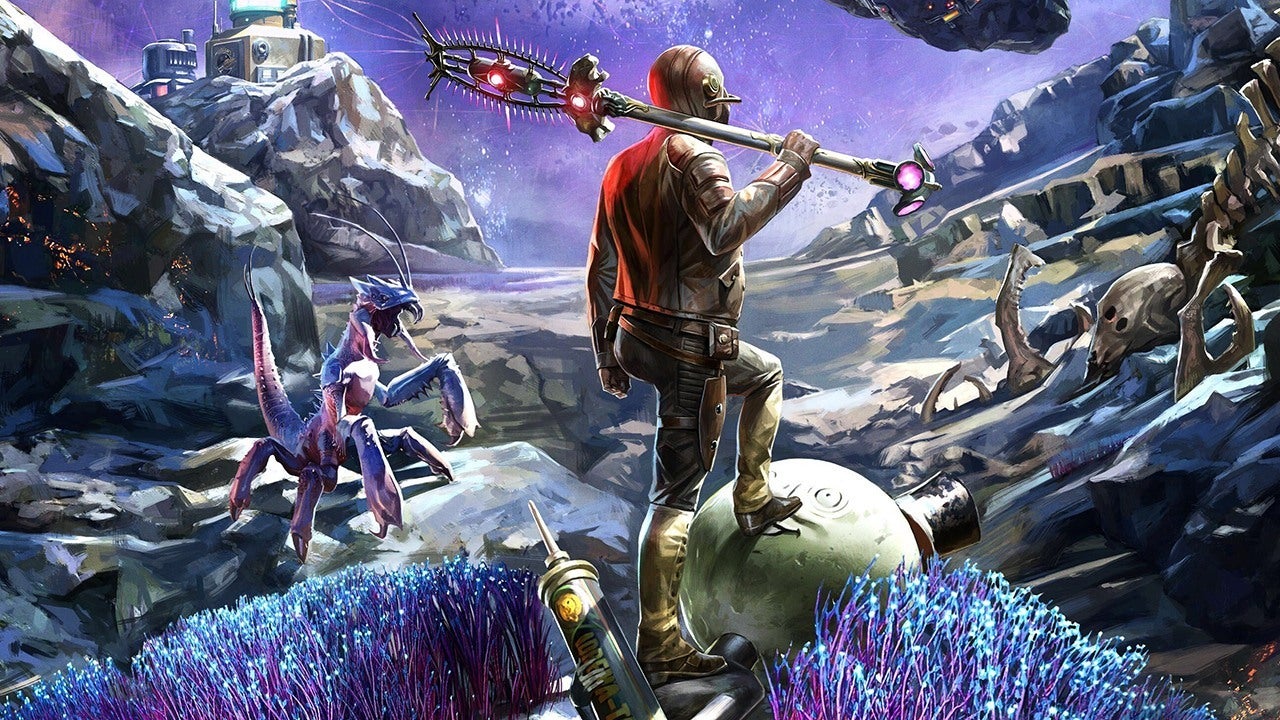 The 11-month gap between the launch of The Outer Worlds and its first DLC feels a little odd, because it’s just long enough for me to have forgotten almost everything about how Obsidian’s sci-fi RPG works. But Peril on Gorgon is a fairly big chunk of side-adventure that took me about eight hours to play through, making it well worth coming back and reacquainting myself for. It’s not terrifically ambitious as far as gameplay goes, but it falls squarely into the “more of a good thing” category.

Within the first hour or so you’re sensationally presented with a mystery clutched in the hand of a severed human arm, and soon after the story drops a shocking revelation about Spacer’s Choice and its drug-pushing pharmaceutical research operation (which Firefly fans might be less surprised about). That quest takes place mostly on the mountainous, industrial asteroid base of Gorgon, but also sends you on quests to other new locations around the Hyperion system. There’s the largely abandoned and creepy Ambrose Manor, an orbital research facility, an exclusive club on Byzantium, and a mercenary ship, and all of those settings keep Peril on Gorgon from feeling one-note.

It’s not really a mystery, of course – more like an extended series of quests to find the journal of the facility’s lead scientist, at which point the shadowy figure who dogs you the whole way reveals themselves without any actual sleuthing on your part. But overall, it’s a decent story with a handful of intriguing characters, starting with the enigmatic heiress Minna Ambrose who hires you for this job, and it’s dressed up in some fun private eye trappings. I can’t say I was floored by the main reveal, but there’s a clever spin on it that raised my eyebrows and enhanced the delivery to make it a little more memorable. And in the end you get to make one of Obsidian’s trademark morally gray decisions to determine how it all turns out – though naturally it doesn’t have an impact on the main story.

[poilib element=”quoteBox” parameters=”excerpt=You%20decide%20whether%20your%20character%20is%20the%20type%20who’d%20execute%20a%20Nazi-level%20monster%20on%20sight.”]Well, I say that it’s a fun story, and it’s mostly delivered with the same dark satirical tone as the rest of The Outer Worlds, but your companion characters treat the war crime-level atrocities you uncover with the seriousness they deserve. That doesn’t always mesh well with the grim comedy of the rest of the story, but it does lend it a fair amount of gravity when, for example, you decide whether or not your character is the type who would execute a Nazi-level monster on sight.

I played largely with Parvati and Nyoka at my side, and if they’re any indication, each one has a good amount of spontaneous commentary with full voice acting. That makes Peril on Gorgon feel every bit up to the level of the main game in terms of fully voiced, well-acted characters.

[poilib element=”quoteBox” parameters=”excerpt=There%E2%80%99s%20quite%20a%20bit%20of%20reading%20to%20do.%20Too%20much%2C%20sometimes.”]That said, there’s also quite a bit of reading to do. Too much, sometimes. One character jokes that there are enough logs and messages scattered around Gorgon to fill a book, and that doesn’t feel like much of an exaggeration. Every so often you’ll run across a terminal with logs, incoming messages, outgoing messages, and archived messages, each of which has multiple entries to page through. Most of them are pretty entertaining tales of corporate malfeasance, but if you want the full story then it can be a lot to get through all at once.

Exploration is rewarding thanks to lots of attention to detail and environmental storytelling, like when you find a character you were sent to track down alongside his journal or a headless marauder lying next to a neck-high tripwire trap. In keeping with Gorgon’s role as a pharmaceutical research lab, the sheer amount of drugs you come across is astonishing – there are piles of syringes everywhere. I was a little disappointed that, given the test lab setting, I was never pushed into a situation where I felt tempted or pushed to use a drug with negative side effects myself. Run-of-the-mill enemies certainly didn’t do it, and neither did the story, which seems like a missed opportunity.

[poilib element=”quoteBox” parameters=”excerpt=Nothing%20is%20really%20added%20to%20The%20Outer%20World%E2%80%99s%20adequate%20combat.”]Nothing is really added to The Outer World’s adequate combat – you’ll fight marauders, psychotic test subjects (basically identical to marauders), space pirates (basically identical to marauders), robots and, of course, primals. Peril on Gorgon is very much more of the same in this department, though I did find a couple of unique weapons, including one science weapon that fills an entirely different role than any other weapon in The Outer Worlds, and one that was just a goofy looking melee weapon.

It took me around eight hours to complete the main missions and the two big side quest chains, which were mostly a series of amusing but simple fetch quests. It’s a decent amount of content to come back to The Outer Worlds for, and if you’re playing for the first time it extends the length of a full playthrough to around 40 hours, fleshing out this relatively lean RPG quite a bit.

Tue Sep 8 , 2020
Vivica A. Fox nominated her for the role of her fallen character’s daughter back in July. Source link