Everyone’s favorite monster-hunting white wolf will be available in collectible plastic form as part of a new line of figures based on The Witcher 3 coming out later this year from McFarlane Toys. IGN was provided with a first look at the twelve-inch Geralt of Rivia.

As you can see, Geralt is decked out in his iconic Kaer Morhen armor with accessories of his steel and silver swords, a Witcher 3-branded base, and a nice bouquet of harpy heads he’ll likely exchange for a jingle of Crowns in the nearest town. 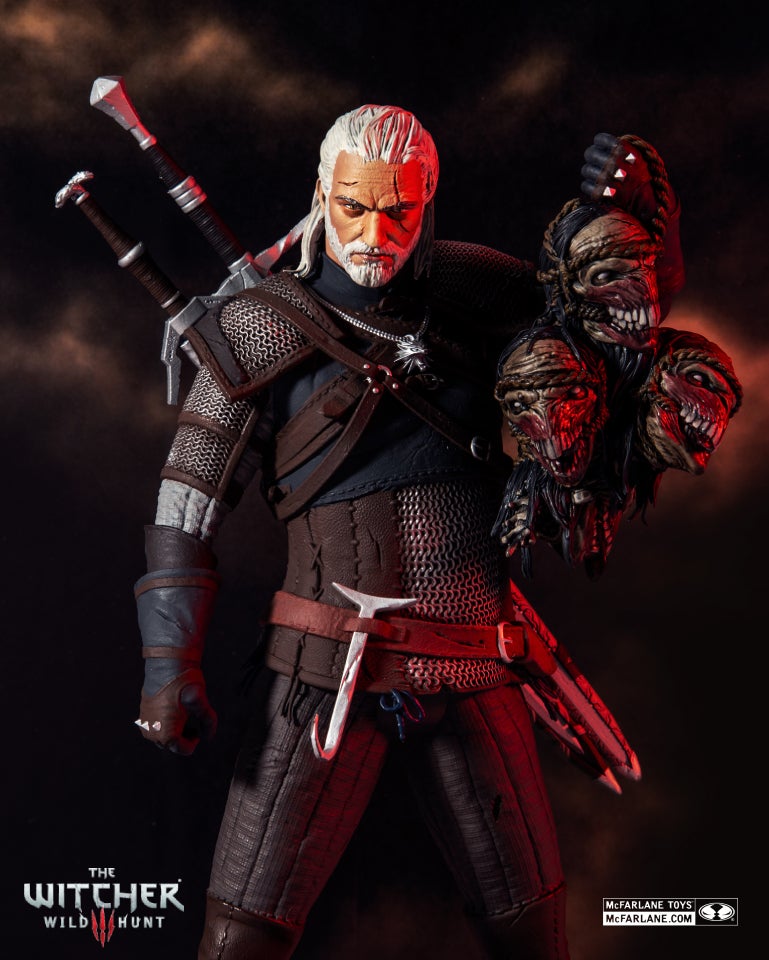 The 12-inch figure will be available in November for a suggested retail price of $39.99, and will be up for pre-order on Amazon in mid-October, but will also be available at Best Buy, Walmart.com, and specialty retailers worldwide. If big dynamically-posed figures aren’t your style, rest assured that some ultra-articulated seven-inch Witcher figures are on the way as well sometime in the spring of 2021.

This isn’t the first CD Projekt Red game to get a line of McFarlane Toys; earlier this year, Cyberpunk 2077 figures hit stores, presumably in timing with when the game was, er, originally planned for release. If you want an idea of what the Witcher figures will be like, check out our unboxing of the 12-inch Johnny Silverhand and some of the 7-inch Cyberpunk 2077 figures.

McFarlane Toys currently produces action figures based on a wide range of video games, including DOOM, Skyrim, Fortnite, Borderlands, Call of Duty, Mortal Kombat, and Cuphead. Oddly, despite its massive popularity, The Witcher 3 hasn’t had a line of conventional action figures until now.

Amazingly, both Dark Horse and Nendoroid have released figures of him taking a bubblebath. Hopefully McFarlane follows suit. You can never have too many versions of Bathtime Geralt.

[poilib element=”accentDivider”]Max Scoville is a host and producer at IGN who occasionally remembers how to write sentences so he can post about action figures. You can check out his toy collection and weird hobby projects on Instagram @MaxScoville

Mon Aug 17 , 2020
The new Matrix movie is back in production and Keanu Reeves talks about the changes made for safety. Source link