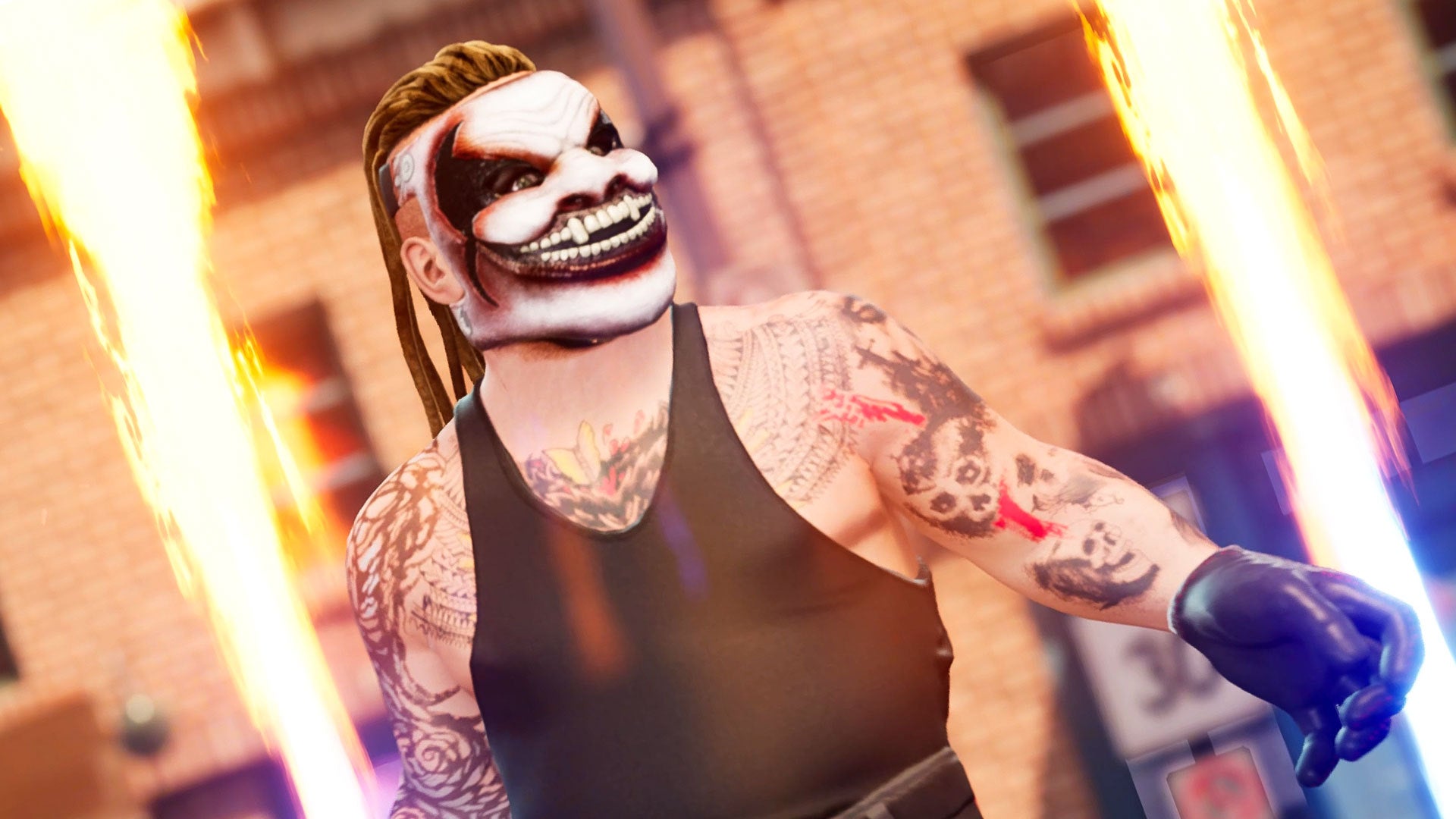 After last year’s well documented misfire, 2K returns with a fresh approach to WWE grappling action. WWE 2K Battlegrounds abandons realism for an over-the-top, chaotic, arcadey fighting game, and appears to get a lot of things right. But this new direction could potentially come with a few problems of its own.

Immediately out of the gate it’s apparent that WWE 2K Battlegrounds is pushing hard in the opposite direction from last years’ simulation effort. It’s clearly angling more towards 2011’s fan favourite, WWE All Stars, not only with its presentation (more on that in a bit), but also its combat style. Battlegrounds’ combat – while still rooted in its grappling blood – pushes the core loop towards more of a Smash Bros style battling system that’s masquerading as wrestling. Gone are most traditional wrestling moves, replaced by absurd, gravity defying variations, super power ups, and a strong emphasis using your environment as a weapon. I’m talking exploding barrels, motorbikes used like baseball bats, and giant crocodiles ready to chomp down on you. It’s bonkers.

As mentioned previously, the presentation has also taken a hard turn from WWE 2K20’s realism. All your favourite WWE Superstars (of which there are 70 plus at launch) are now cartoon like caricatures of their real-life counterparts that are both completely recognisable, but also uncomfortably odd looking. There’s no mistaking it’s WWE, although it does lack elements of its pageantry. For example: all superstars bizarrely enter the Battlegrounds from an exploding shipping box for some reason, missing out on opportunities to lean into the wackiness of each real-life WWE character. I would’ve loved to have seen Stone Cold Steve Austin smash through a glass plate, or the New Day come out of a giant cereal box instead. The arenas, or Battlegrounds as the game calls them, are also beyond anything you’d ever see in WWE, featuring environments like a military boot camp, Florida swamp, and an auto shop; the latter two of which I got to experience during my hands-on time.

The combat is surprisingly easy to pick up and the systems are relatively simple, and it wasn’t long before I was uppercutting Edge with a novelty mallet and landing 20 foot high chokeslams. While maintaining its DNA of wrestling moves, Battlegrounds still manages to simplify the combat, making it far more accessible to a wrestling newcomer wanting to perform a leaping elbow drop assisted by your opponent’s face! Moves feel incredibly satisfying, with high impact sounds adding to the devastation. Not feeling the weight and thud of moves is actually an issue I’ve had with WWE games for years, and I’m happy to now play a game where Undertaker’s Tombstone looks and feels as devastating as it should, especially when you’re now dropping it from 15 feet in the air.

There’s also some slight hints of depth to the combat that I feel I’ve only scratched the surface with. There’s 5 character classes, each with different point values attributed to skills like stamina, health, and speed, although I’m not sure I really felt the difference until I (as Jeff Hardy) got into a High Flyers tangle with Xavier Woods, when the game changed from being less about weapons and high impact blows and more who could out-flip who. Each superstar also has 3 power ups that can be selected from 18 overall. Unfortunately I only got to sample 3, all of which felt useful (like the ability to heal my health), albeit a bit boring. I’m definitely interested in what variety there is though, considering the tease of power ups that can freeze your opponents, and an earthquake shatter that breaks the ring.

Yes, that’s right, you can destroy the ring and – best of all – the battle still continues. It’s something that’s an awesome sight the first time you see it, but it began to wear a little thin after the 10th time. I don’t think it’s any exaggeration to say a good 80% of my matches had the ring collapse, and by that point I’d become a little numb to it. The coolest detail though, is once the ring falls apart, not only does the fight continue, but you can also pick up the fallen ring posts and wrap them round your enemies face. It’s a nice touch that stays true to the battleground mantra, I just wish it happened less often and thus felt more special.

Beyond playing a Fatal 4 Way with both the men and women, I also got to try one of the many different modes coming in Battlegrounds, a WWE classic with a Battlegrounds twist: an electrified steel cage match. Seeing your opponent getting zapped off the cage definitely felt on brand, but the whole system of randomly collecting money before you’re allowed to escape felt at odds with the Battlegrounds formula, especially as the system felt like an arbitrary way to pad out the mode. Once you have all the cash you need, escaping is VERY quick and easy.

With breaking rings, exploding barrels, and electric shocks all taking place in a short 2-5 minute match, the chaos works as both Battlegrounds’ greatest strength and weakness. The madness is great, and I imagine playing with 3 other friends with all this spectacle surrounding you is good fun, but in the demo build I played the performance could be quite poor in these chaotic moments. The frame rate sometimes chugged, and more often than I’d like it practically ground to a halt. Perhaps these are technical issues that can be fixed before launch, but as of this article going live the launch is in 4 days… I’m not sure if I can be that optimistic.

Battlegrounds is also unable to shake the shackles of its simulation relative, including some misplaced commentary issues that’s plagued the WWE 2K games for a while (in this case, calling out things like a sidewalk slam by Braun Strowman when Edge is in fact punching Rey Mysterio in the back of the head.) That said, from what I heard the commentary felt like an improvement on WWE 2K20, although does have a tendency to be completely overwhelmed by the frantic action.

For years now I’ve been wanting a sequel to WWE All Stars, and in many ways this feels like it could be exactly that. But I can’t help but worry that while taking on the DNA of the cult classic, it’s also adopted some of WWE 2K20’s less desirable technical issues.

Dale Driver is a Senior Video Producer for IGN and is a life long WWE fan/apologist. Be thoroughly bored by following him Twitter at @_daledriver.

Johnny Depp’s Defamation Case Against Amber Heard Has Been Delayed, But Not Why You’d Think

Mon Sep 14 , 2020
Johnny Depp got what he wanted, but for totally different reasons. Source link