We’re all looking to get a piece of the next-gen pie, some are even quite desperate in fact, and we don’t blame you. But, we do hope you’re not this desperate. UK retailer Currys PC World currently has the Xbox Series X listed for an eye-watering £2449. That’s right, almost two-and-a-half-thousand of the Queen’s finest pound sterling, and about $3,200 USD at the time of writing.

But why, you might be asking, is a major British retailer deliberately selling the console at such a ridiculous price? Rather strangely, this surprise price tag is just another part of the retailer’s preorder process.

According to Nick Hayden, Head of Gaming at Currys PC World, the “unique pricing strategy” has been put in place to prioritize those who have already preordered the console. Every customer who has managed to secure a preorder has been supplied a code that will effectively discount the listing by £2000, back down to the expected £449.

Those who had preordered an Xbox Series X (or PS5) with Currys were already required to put down a £5 deposit and this current situation is, presumably, a way for the retailer to give everyone an option to pay the full price for the console now, or when it ships in November. 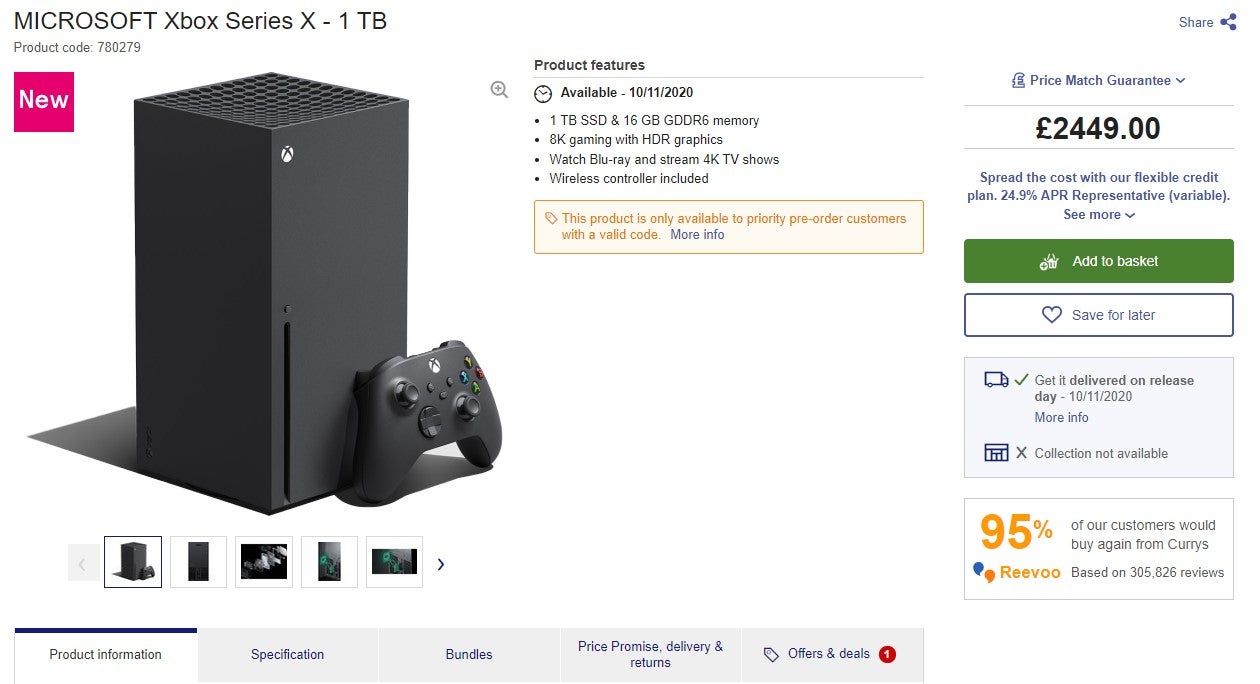 In case you were wondering, those in the UK can actually go through to the order page and attempt to buy the console for the full £2449, seriously. However, before any gamers with more money than sense jump the gun, Currys does have a failsafe in place, as all orders that are placed without the special promotional code will be canceled. Which, to be quite frank, is a very good thing.

The codes were actually only valid up until October 18, 2020, so now the page is just sitting idle with a big fat price tag attached to it. There’s a very good chance that the console will drop back down in price soon to allow others to preorder, or simply just buy it on release day.

If you want any updates on Xbox Series X preorders, we’ve actually got a dedicated update page. We’d also recommend following @IGNDeals or @IGNUKDeals for live preorder updates on both the PS5 and Xbox Series X.

Robert Anderson is a Commerce Writer for IGN. You can follow him @robertliam21