I hope that one day Guillermo del Toro finally gets to make his Frankenstein movie. This is a film project he’s been wanting to do his entire career, but it still has yet to happen. Maybe one day it will, but we’ll just have to wait and see.

As you all know by know, Doug Jones is the actor that Del Toro wants in the role of The Monster. Jones has worked with the director on several projects and was the actor who played The Creature in The Shape of Water.

In a recent interview with Collider, Jones opened up about the film and Del Toro’s vision of The Monster. Jones actually saw a bust of his own face as Frankenstein’s monster, and when describing what his version of the classic horror character would have looked like, he said:

“[M]y first thought is that I’m not the big, broad, big-boned lumbering Frankenstein that you have in mind. But it was told to me, Guillermo is a big fan of Bernie Wrightson, and a friend of Bernie Wrightson, and Bernie had illustrated a version of Mary Shelley’s Frankenstein, and all of the images of Frankenstein’s monster in that, that’s what he was going to pattern my look after. Which was more emaciated, little skinnier, little more drawn, little more pathetic looking. And yet, had an unnatural physical prowess, an unnatural athleticism to him. He was sewn together with spare parts of a couple different bodies. Very bony face, long, stringy, drawn hair.”

I love Bernie Wrightson’s Frankenstein illustrations! They are absolutely beautiful, and it’s not hard at all to imagine Jones looking like this version of the legendary character. Here are a few illustrations for you to check out below: 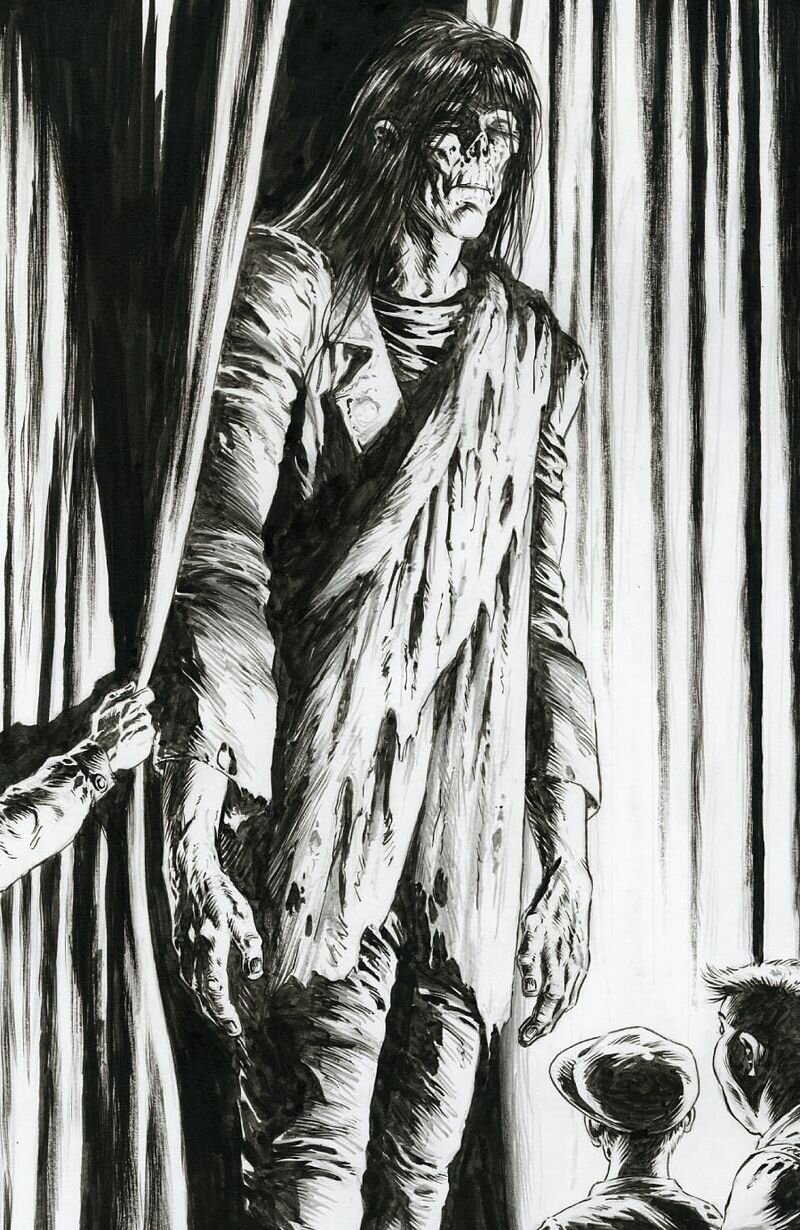 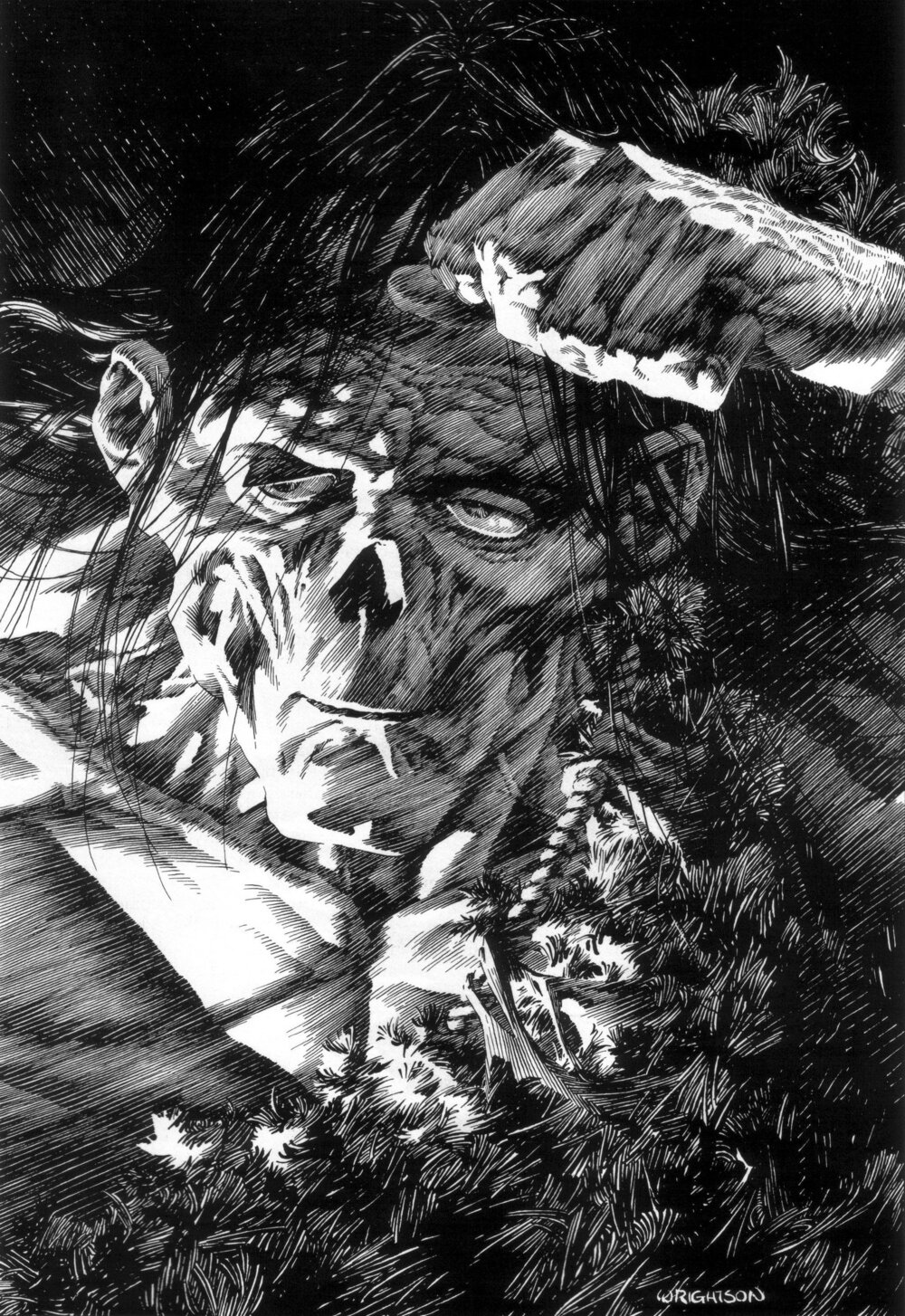 Jones went on to say:

“I never went through a makeup test myself for it. But I did go to the creature shop, Spectral Motion, who was developing the look for him at the time…I was in the creature shop for something else, and Mike Elizalde, the owner of the shop, said ‘I gotta show you something.’ Then he unveiled a head and shoulders bust of me with this monster makeup built on it. It was like, honestly, my eyes welled up. It was so hauntingly beautiful, and it did pay reverence to Bernie Wrightson’s artwork and also gave you a different-looking Frankenstein monster than what you’re used to.”

Damn, I wish that we could see that bust! I would love to see that Del Toro was planning for Jones’ version of the monster.

Universal did plan on making a Frankstein movie with Javier Bardem when they were going to build their Dark Universe before it crashed and burned with Tom Cruise’s The Mummy. As of right now, the studio doesn’t have any plans for a Frankenstein movie. I think they should just hold off on it until Del Toro is ready to do it.

Del Toro previously opened up a little bit more about what he would love to do with his vision of Frankenstein if he didn’t have any restrictions. He explains that he would want to be a multi-part saga:

“I’ve always [imagined it] as a two to three-part story, because in order to encompass the book you have to change points of view and it’s a complex exercise.”

A few years ago, del Toro shared his love for the property, but also explained that he does have a fear of making it, which is why he hasn’t done it yet:

“Frankenstein to me is the pinnacle of everything, and part of me wants to do a version of it, part of me has for more than 25 years chickened out of making it. I dream I can make the greatest Frankenstein ever, but then if you make it, you’ve made it. Whether it’s great or not, it’s done. You cannot dream about it anymore. That’s the tragedy of a filmmaker. You can dream of something but once you’ve made it, you’ve made it. That’s it. You landed a 10 or you landed a 6.5 but you were at the Olympics already, and you were judged.”

I’m holding out hope that Del Toro will get to make his Frankenstein movie one day.

Bethesda Is Interested In More Multiplayer Games After Fallout 76, But Its Approach Needs To Change

Thu Nov 5 , 2020
To say that the Fallout 76 launch and the subsequent year was messy would be a massive understatement. While not the company’s first multiplayer game, it was a first for the Fallout franchise. After numerous changes and a major overhaul, the Fallout 76 community is active and the overall reception […]