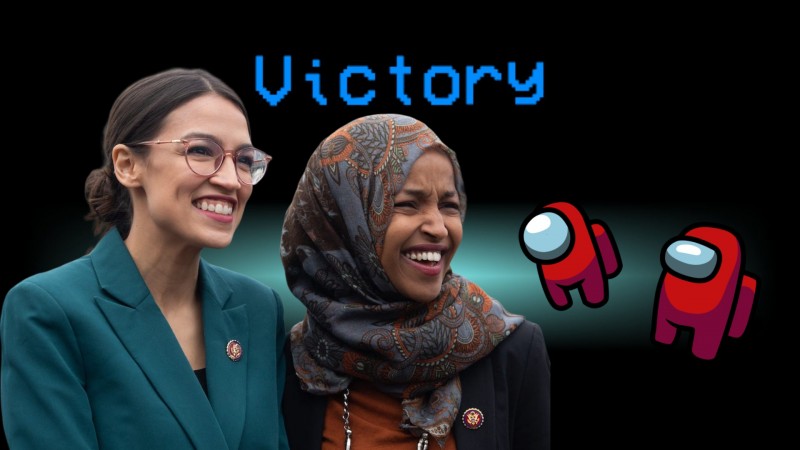 Yesterday, New York representative Alexandria Ocasio-Cortez (also known as AOC) took to Twitch for the first time to stream some Among Us with big-name streamers to raise voter awareness. She didn’t talk about who to vote for and she did keep policy talk relatively light, instead, she encouraged viewers to just go out and vote and to vote safely with the pandemic still ongoing. With an impressive peak putting her at over 435,000 concurrent viewers at one time, making her one of the highest viewed ‘streamers’ concurrently to-date, she also was pretty entertaining to watch when joined by fellow house representative Ilhan Omar.

From accidentally self-reporting on her very first match to just all-around funny moments while trying to vote who is sus and who isn’t, there were some pretty hilarious moments in the recent stream. Even reactions from her fellow streamers were numerous light-hearted moments that happened when this whirlwind idea quickly became a reality.

Here are some of the highlights from the recent AOC debut stream:

today. i was killed by @AOC in among us within the first five minutes. pic.twitter.com/W1Uf17o34K

highlights from the @AOC among us stream – my love for this woman knows no bounds 💖 https://t.co/aZErKVAlVw pic.twitter.com/OCa06KMuob

UPDATE: AOC gets Imposter in her first time playing Among Us on Twitch. She gets voted out by everyone except Ilhan Omar. AOC says “She’s my ride or die!” pic.twitter.com/afOaBl7bGV

AOC in Among Us: “I can’t kill Poki, she’s so nice. I can’t do that … okay, I think I have to do it.” pic.twitter.com/RgzTaVOjvA

She wasn’t completely silent about the ongoing political climate, but she did not do what a lot of people seemed to think she was going to do: insult any members of the government or use this platform to push certain ideas in an aggressive manner. She did speak about healthcare with @homberguy, a streamer that lives in the UK where healthcare is more accessible:

AOC talks healthcare with @Hbomberguy, who is from the UK, where healthcare is free. pic.twitter.com/3wMUZXpuF7

Overall, the event was entertaining and the rotating group of streamers that joined her brought an element of established gaming into the mix, showcasing once more how videogames are being more and more integrated into mainstream media in a productive way. Which is great, given how gaming has been a scapegoat for ‘everything wrong in the world’ for ages.

What did you think about the recent AOC Twitch stream? Sound off with your thoughts in the comment section below, let’s just make sure to keep that conversation civil.

Sun Oct 25 , 2020
Disney frequently includes Easter eggs in their productions, and Once Upon A Snowman — the new Frozen short film that tells Olaf’s origin story — is no different. The short film bridges the gap between the moment that Elsa recreates Olaf and the time that Olaf meets up with Anna, Kristoff, and Sven. Though Once Upon A Snowman […]