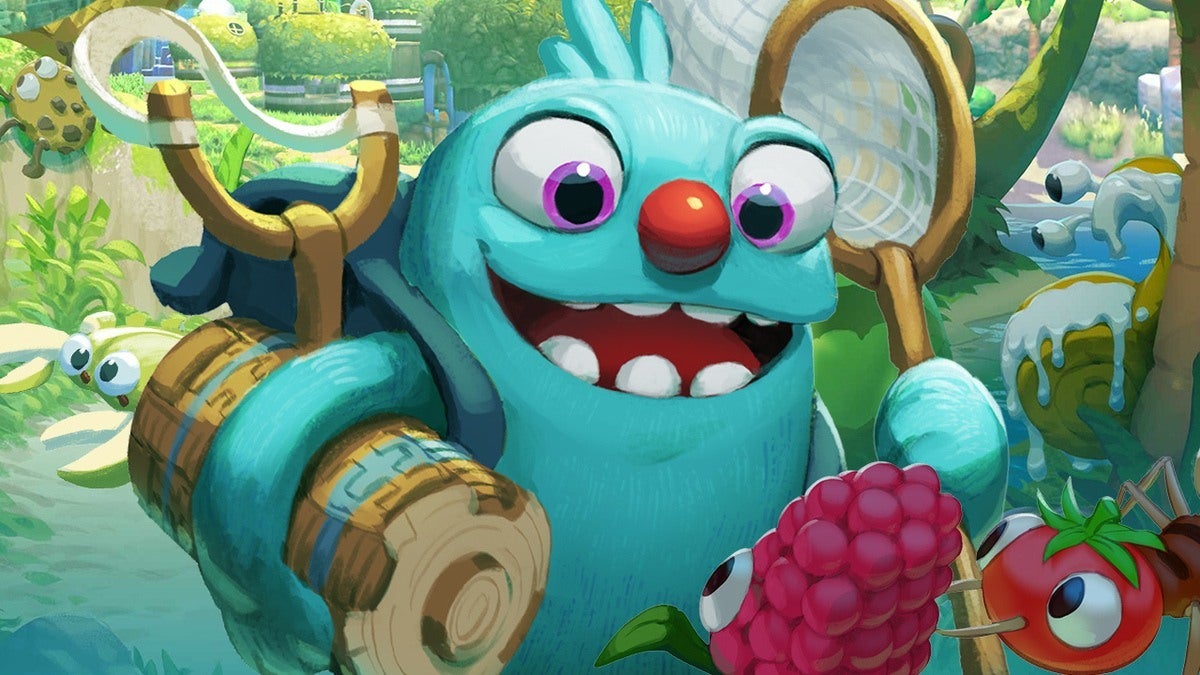 After months of humming the catchy theme song in my head, speaking to the Young Horses developers about bug and snack portmanteaus, and rewatching its mysterious first trailers, I’ve finally played and understand a bit more about Bugsnax. And while there is plenty of mystery left to the goings-on of Snaktooth Island and its denizens, my hour-long hands-on with the opening of the next game from the Octodad developers showed a mix of Pokemon Snap, Pokemon itself, an island-set mystery adventure, and a hilarious character study.

That all sounds like a lot, but it’s because Young Horses, like it did with Octodad, is taking something seemingly light-hearted on the surface and imbuing it with a depth that has me excited to return to Snaktooth and discover new Bugsnax and characters.

We Are Whatever We Eat

One of the key reasons I’m excited to explore more beyond the couple of environments I saw in the opening hour on a PC build of the game is, quite simply, the hilarious writing and character performances. This isn’t a huge surprise considering how funny Octodad was, both in its writing (despite a protagonist who couldn’t speak) and in its gameplay. But Bugsnax’s more expansive tale of a journalist adventuring to the mysterious Snaktooth Island at the behest of Elizabert Megafig, an explorer hoping to uncover the mystery of the titular bug and snack hybrids, allows for a host of immediately indelible personalities. In my short time with the game, I met the panicky Filbo Fiddlepie (One-Punch Man’s Max Mittelman), the gossipy Beffica Winklesnoot (Persona 5’s Cassandra Lee Morris), and the Bugsnak-loving inventor Gramble Gigglefunny (Critical Role’s Sam Riegel).

Like a snack-obsessed Dr. Seuss village, the cast of Bugsnax offers a constant flow of hilarious, unique, and intriguing perspectives on the island, its snax, and its other citizens thanks to both the impressive voice cast and sharp, funny writing. From small touches like the hilarious exclamations of each Bugsnak saying its own name when you catch it, to the reasoning of gruff farmer Wambus Troubleham (Fred Tatasciore) as to why he grows ketchup, Bugsnax had me laughing out loud several times and otherwise chuckling along to the wacky world I found myself in.

But I was also interested in learning more about these characters and the island, which is a good thing, because as a journalist, you’re on the hunt for the scoop behind Elizabert and Bugsnax. You’ll interview each of the citizens for your story, while also speaking, working with, and, as in one example, even spying on them to complete missions. An unexpected main mission becomes bringing the scattered group, lost for purpose in the wake of Elizabert leaving, back to the central Snackburg, a small village that repopulates and acts as a hub between many of the island’s other locales, including a rocky beach, a forest clearing and its neighboring caves, and more I didn’t get to explore.

Of course, exploring is also a main facet of Bugsnax, as you’re not there just to make friends. Roaming around in first-person, Bugsnax plays largely familiarly to other first-person adventures, as you run, jump, and crawl around on whatever mission or whim you choose. Clicking in on the right stick kicks in a viewfinder, that not only identifies the various Bugsnax around you but also makes note of key items in the environment, such as a bush bugs may hide in, ketchup plants, people, and even the paths the Bugsnax roam in.

And tracking their movement like you would a robotic foe in Horizon Zero Dawn is important, not because you are then going to systematically dismember the Bugsnax — that would be terrible and cruel. But because each one behaves differently and will require you to approach in different ways if you want to trap them.

Strabbies, for example, will go hide in one of those bushes if you get too close, otherwise they roam in a loop nearby. Once I scared one away, I’d stick a trap down in one of the identified paths, and then run away, hoping to lure it back out to trap it. The Fryder, which I spotted on a cave rooftop, is attracted to the smell of splattered ketchup, but so were the nearby Bungers, which can only be caught when flipped on their backs.

By pulling up a radial wheel, which freezes time, you can easily swap between traps, slings to throw sauces, and more to help in your Bugsnak-catching ventures. It takes away any of the frustration, at least so far, that might come with this natural habitat interacting without you, and especially because once a snak is trapped you only have a few seconds to claim the trap before they break free. But I loved the discovery that came with each new creature — understanding its patterns, being surprised by how it might react to the world around it, and using all of my items, and maybe even some other bugsnax, to aid in catching them offered layers to what could have been an otherwise simple catching mechanic.

And there’s clearly some more complexity to the hunt to come, as I only had a few of the tool slots filled up in both that item wheel and in my extensive notebook, which acts as a sort of Snakdex for any and everything on Snaktooth Island. Toward the end of my demo, I ran into Gramble, who had trained a Strabby to follow directions while running around in a little hamster ball. Handing the reins over to me, Strabby opened me up to a whole new set of creatures to catch, as I could send his ball into small holes I couldn’t reach, which would incite hidden Bugsnax to brave the world for just a moment before I set a trap on them.

Knowing the basics of what Bugsnax is now, I know I’ve really only uncovered the start of the mysteries Snaktooth Island holds. Like with Octodad, Young Horses is blending the familiar and the absurd with Bugsnax, and while getting to play the game has addressed some questions I had, it raises new ones about who all of these Snaktooth Island denizens are, why they’re here, and how am I going to catch the next Bugsnak I find. And I’m excited to make a return trip to uncover every last answer.

Jonathon Dornbush is IGN’s Senior News Editor. Talk to him on Twitter @jmdornbush.