Cyberpunk 2077 has been delayed again and will now be released on December 10. Although the latest delay marks the third time CD Projekt Red’s ambitious cyberpunk RPG is pushed back, this latest delay caught many off-guard, particularly because the November 19 date seemed — until today — fairly ironclad.

The official Cyberpunk 2077’s Twitter account has been firm on the November release date for some time and based on tweets as recent as yesterday, the upcoming RPG seemed all set to hit the November 17 release date.

Unfortunately, the existence of that tweet has become fodder for those disappointed by the latest delay news. And the official Cyberpunk 2077 Twitter account now has to contend with the responses. 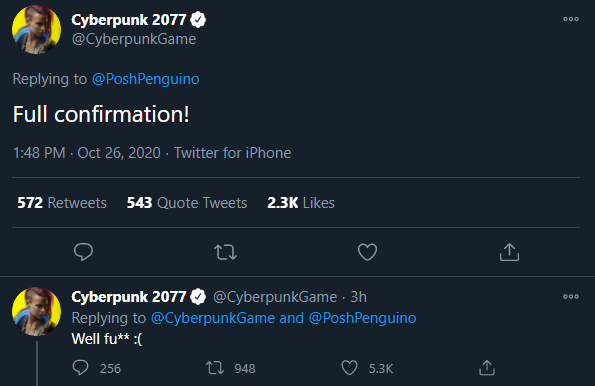 “Would anyone notice if we delete this real quick?” the Cyberpunk Twitter account asked in response to another one of their tweets, this time from October 6 that says “No more delays are happening.” 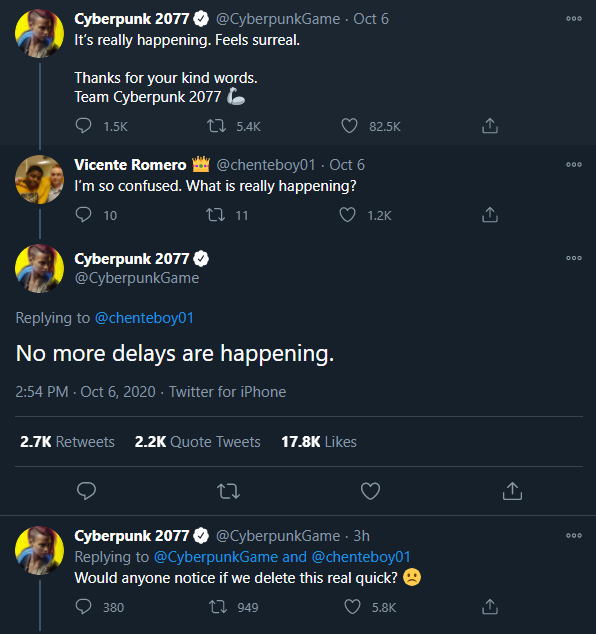 Now, the social media team is putting out fires by responding to people on social media – sometimes with jokes, sometimes in earnest – about why they couldn’t alert people earlier about the delay.

Or course we are. This sucks – who enjoys letting fans & community down?

“Of course we are [gutted]. This sucks – who enjoys letting fans & community down,” the Cyberpunk Twitter account responded after someone said the social media team seems as disappointed by the news as the community.

It was fine until up an hour ago.

“Yo socials guy how has your day been?” asked one Twitter user following the delay news.

“It was fine until up an hour ago,” the Cyberpunk team responded.

The numerous delays have also allowed some on the dev team to poke fun at themselves. One of the quest designers on Cyberpunk 2077, Patrick K. Mills, tweeted, “Even I’m starting to think the game isn’t real, and I’m playing it right now.”

Even I’m starting to think the game isn’t real, and I’m playing it right now.

It has been reported that the Cyberpunk 2077 dev team may have found out about the latest delay last-minute. Jason Schreier tweeted, “All of them found out at the same time we did – CDPR sent an internal email simultaneously with the public tweet.” This could explain why the Twitter account was confirming the November release date as recently as last night.

Ultimately, the social media team at CDPR is keeping a stiff upper lip, especially since they have to deal with past tweets affirming there’d be no more delays. “We have a very nice community, a great social media team and you can’t tweet pics of futuristic cars or bad puns all day. In the end we’re still one company.”