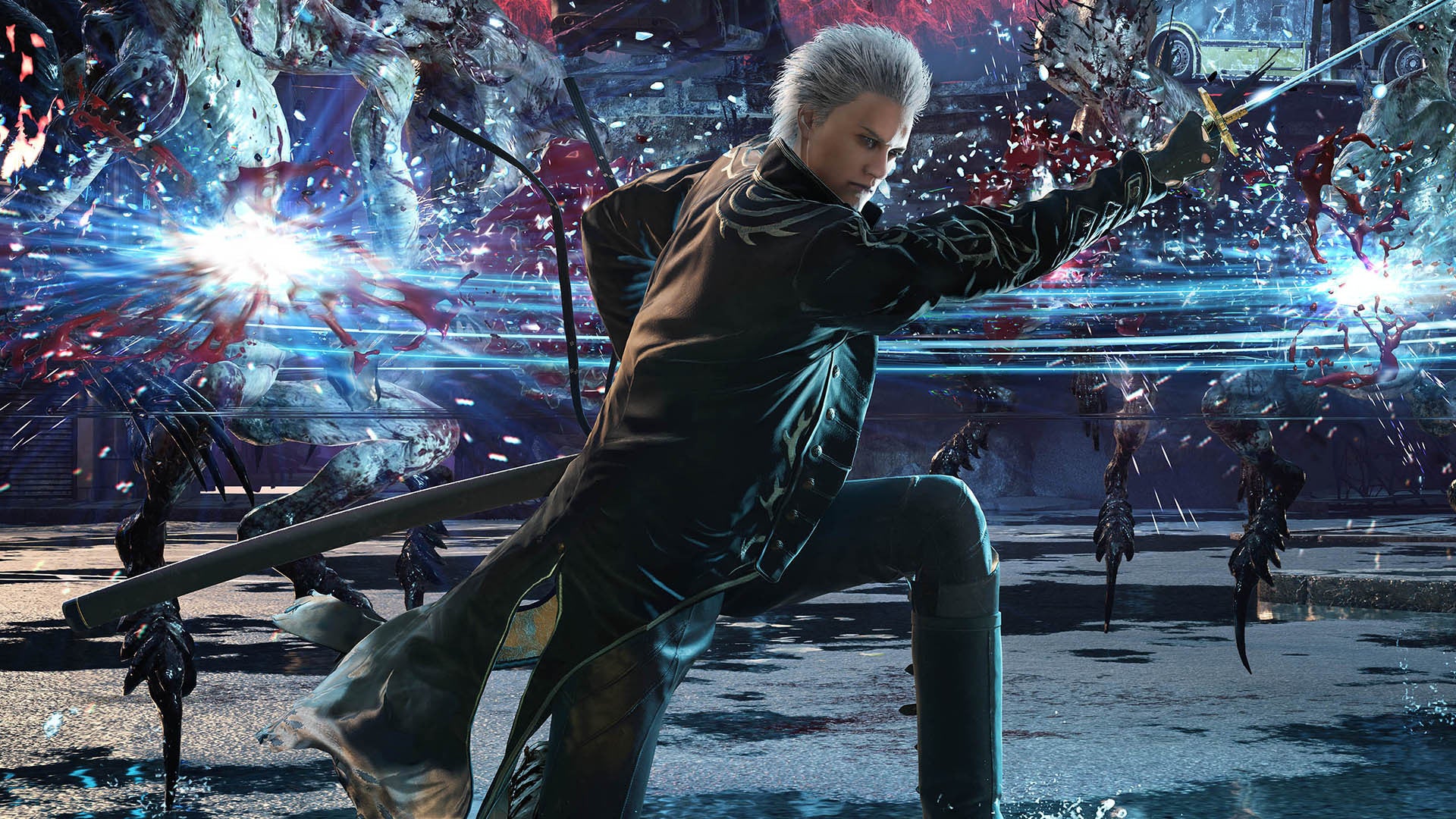 Devil May Cry 5 is already a special game in the hearts of many, but the next-gen version is about to get even more special thanks to the addition of everyone’s favorite blue-clad brooding son of Sparda, Vergil. I got to play the PlayStation 5 version of DMC5 Special Edition to give him a test drive, and while he feels very similar to previous iterations, Vergil’s got more than a few tricks up his sleeves.

If you’ve played as Vergil in previous Devil May Cry special editions, especially his iteration from Devil May Cry 4, you’ll feel right at home with DMC 5’s version. For those unfamiliar, he uses three weapons: his trusty Yamato sword, the Beowulf gauntlets introduced in Devil May Cry 3, and the Mirage Edge, which is virtually the same as the Force Edge that he used in Devil May Cry 4. He also has a unique mechanic called Concentration, which rewards the player for playing Vergil in a way that suits his confident, stoic, and elitist personality.

You see, Vergil is not the kind of character that would just rush head into action like Dante or Nero would. He’s calm, collected, and above all else, precise in his movements and strikes. As such, if you’re standing still or walking slowly towards your enemies, the concentration meter will start to fill. If you start running around, missing wildly, or get hit, the gauge will plummet. The higher your concentration, the more effective each of your weapons become: the range and damage of Yamato will increase, Beowulf will be able to charge up an additional level to deal massive damage, and the Mirage Edge will take on multi-hit properties.

The biggest change to Vergil’s gameplay in DMC 5 Special Edition is how he handles his Devil Trigger. Now when he activates Devil Trigger, instead of taking on a demon form, he summons a doppelganger that will mimic his own actions. The doppelganger only uses the Yamato, regardless of the weapon Vergil is wielding, which can make it a little tricky to effectively utilize if you’re not also using the Yamato while the doppelganger is active. Nevertheless, being able to put on twice the damage for a short period of time is quite powerful.

One other interesting new ability Vergil has is the ability to stab himself with his sword and switch places with V for a powerful attack that utilizes all of V’s summons. It’s flashy as all hell, and has great utility since any enemies that are defeated with it drop green health orbs, but the animation is a bit long and gets a bit old for my personal liking.

If you’re upset about the loss of his demon form, don’t fret, because Vergil still has access to it, though this time it’s through his Sin Devil Trigger. You can hold L1 to transfer devil trigger energy into his Sin Devil Trigger meter, and when it’s full, holding down L1 will transform Vergil into his demon form, which gives him health regeneration, powers up all of his existing moves, and some gnarly special attacks that deal ridiculous amounts of damage.

If it’s not already apparent, Vergil is an extremely technical character. He doesn’t have a double jump that lets him easily escape bad situations; he gets actively weaker whenever he gets hit, whiffs, or runs away due to the loss of his concentration meter; and while he’s got a proper dodge and block, they require very strict timing to use effectively. As someone who only dabbled with him in Devil May Cry 4, this made the initial learning curve a bit rough to get over early on, especially because most of his really useful moves are locked away in the shop once you start off.

Still, once his playstyle clicked with me, and I started learning how to best utilize the concentration mechanic, and how to use my air trick to cancel the animations of both my attacks and their recoveries, Vergil became a blast to play, easily on par with the rest of the cast.

Aside from Vergil and the returning Turbo Mode that speeds up the game by 1.2x, Special Edition also adds Legendary Dark Knight Mode, which is a difficulty mode that is unlike anything the DMC series has ever seen. And while DMC4: Special Edition also had a mode called Legendary Dark Knight, this version in DMC 5: Special Edition is on another level. It ups the number of enemies on screen to near musou levels of absurdity. At just the second encounter of the game where there were once maybe five or six enemies on screen at once, in Legendary Dark Knight mode, there are close to 30. It forces you to approach combat entirely differently, and while it isn’t my preferred method of playing Devil May Cry 5, it certainly has its unique appeal.

Finally, as for how DMC5 plays on PS5, the DualSense controller has an excellent form factor and felt great in my hands while playing, though interestingly, Capcom decided to use the adaptive triggers to apply resistance to the left trigger when you try and rev Nero’s Red Queen sword. Sure enough, it has the feel of revving a motorcycle, but considering how much any seasoned player uses that technique, having to apply extra force in order to get it to work got tiring very quickly. Fortunately, you can turn it off in the options menu.

Stay tuned for more Devil May Cry 5: Special Edition, including a look at the various visual modes available in the Xbox Series X and PlayStation 5 as we get closer to launch.

Mitchell Saltzman is an editorial producer at IGN who has an SSS rank in his love for the DMC series.

Tue Nov 3 , 2020
John Boyega has been making his voice known since The Rise of Skywalker arrived in theaters. Source link