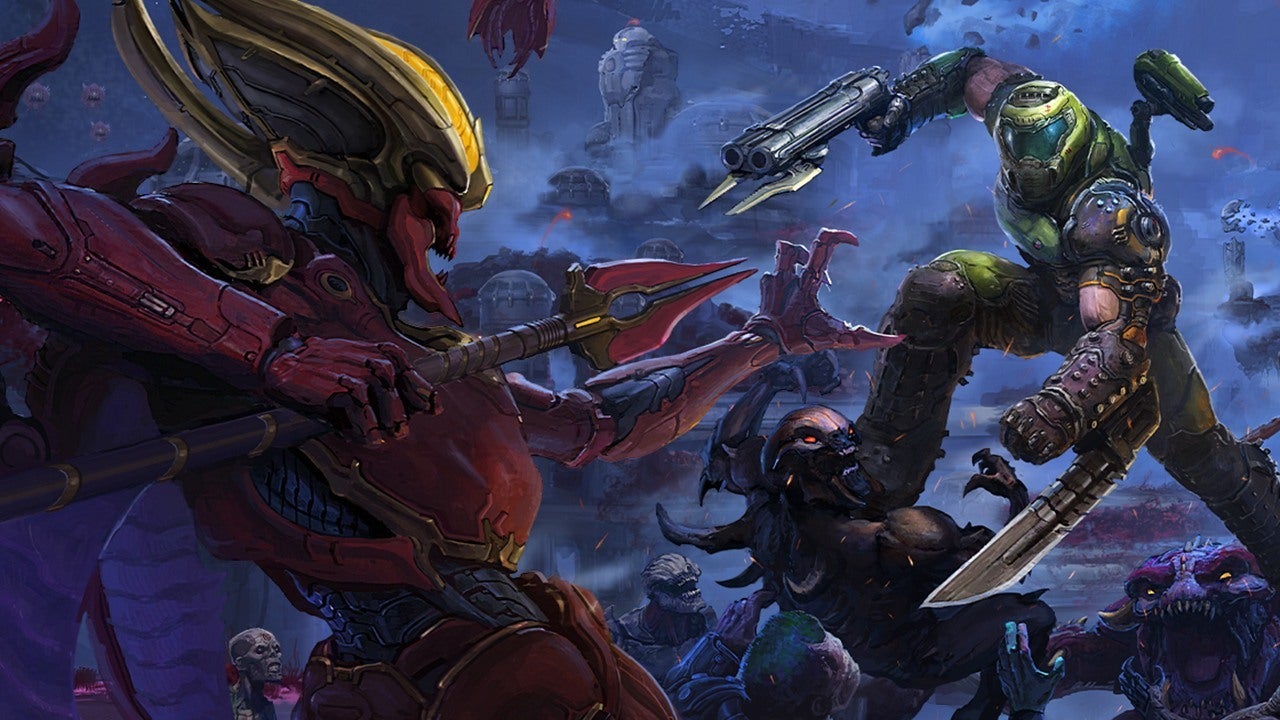 Doom Eternal’s first story DLC, The Ancient Gods Part 1, reminds me a lot of one of the original Doom’s expansion episodes, Thy Flesh Consumed. Both are more intense and challenging versions of their base games. And technically, you can jump straight into The Ancient Gods, but my goodness would I not recommend it. If you try to go into this cold, they’ll end up scraping you off the walls. For the most part it’s more of the same but harder, which certainly scratches an itch.

You’re going to need every weapon powerup, rune, and Praetor suit point you’ve earned in the main campaign – which all carry over to the DLC – in order to have any hope of surviving Doomguy’s latest assignment. The Ancient Gods wastes no time in stuffing you into the nearest locker, high school bully-style. You’ll have a Marauder thrown at you a mere 15 or 20 minutes into the first of these three long missions. And immediately after that, a tempting powerup at the end of a corridor “rewards” you by locking you in close quarters with a Cyberdemon. That sets the tone for what to expect from The Ancient Gods over its 3-6 hours.

The thing about Doom, though, is that its high-speed hijinks are a good kind of pain. I hadn’t played Doom Eternal since it was first released, and I got beaten up pretty hard while I warmed up and found my footing. Once I did, though, I found that same adrenaline rush that Doom has mastered so uniquely. Sniping weak points of Mancubi and Revenant to neuter them makes me feel badass, as does wiping out a wave of surrounding imps and zombies with a single Blood Punch. There were many battles so white-knuckle insane and against such seemingly overwhelming odds – in which I repeatedly came close to death, only to get a clutch glory kill that refilled my health to get me back in the fight. Let me tell you, the whole house heard me celebrate when I finally cleared those battlefields.

Platforming challenges return as well, making for welcome breaks between the more-stressful-than-ever combat. Like any expansion worth its salt, The Ancient Gods does offer a new trick or two, but not much. The eyeball turrets are mostly annoyances rather than real tests of your mettle, but you’d be wise to take them out first before turning your attention to the bigger targets. Also, spirits return from Doom (2016), and they are probably The Ancient Gods’ biggest hassle. They buff the nearest (and usually most powerful) monster’s hit points, speed, and strength. Worse, once you finally kill their superpowered host and make them vulnerable to the Plasma Rifle’s secondary microwave-beam attack, you have to grab them quickly, Ghostbusters-style, or else they’ll just possess another bad guy and keep torturing you. It forces you into a quick decision: do you go after the Spirit first, or clear out its other potential hosts nearby?

Oh yeah, this is story DLC, by the way! On that note, The Ancient Gods still relies too heavily on hidden Codex pages and their dull wall-of-text presentation in order to fill out the plot, but at least more of the main events are told in proper cutscenes this time. And without spoiling anything, I’ll say that the cliffhanger you knew was going to be there by virtue of the “Part 1” in this DLC’s title presents an interesting setup for Part 2.

Adam Sandler Will Go To Space In A New Netflix Movie