This year hasn’t been great for a lot of reasons, but for gaming, it’s one of the most exciting I can think of… maybe ever? The new-gen consoles are finally out and being anxiously scribbled on the Christmas wishlists of kids and grownups everywhere. But for old-heads like me, the Xbox Series X and PlayStation 5 pale in comparison to the allure of the Game & Watch: Super Mario Bros. 35th anniversary edition from Nintendo. While at the time of writing this, you still can’t preorder this thing from US retailers, once it does go on sale, as far as I’m concerned it’s worth plunking down $50 on this absolutely charming piece of Nintendiana (a word I just made up to classify the world of Nintendo collectibles).

Right off the bat, I’ve run into a big problem in how to recommend the Mario Game & Watch: Is it a clock with built-in games, or a game device that also tells time? Apart from the clock, it has two playable Super Mario games – the original NES Super Mario Bros. and its Japanese sequel, Super Mario Bros. 2 (AKA The Lost Levels) – and a special version of one of the original Game & Watch games, Ball. You’ve definitely played at least one of these games, and maybe even all three, so there’s nothing you haven’t seen or had the opportunity to see before. That means the value of the Nintendo Super Mario Game & Watch rests mostly on its novelty as a collectible – and that’s where it shines. But it’s not just for show, since its quality, particularly its tiny screen, is much better than I was anticipating, which makes it an appealing way to play these decades-old games.

The face is made of a brushed metal, with a tiny bump-out where the screen sits. The metal surface is great because it doesn’t pick up fingerprints at all, which is sometimes a problem with handheld devices. The B, A, “Game,” “Time,” and “Pause/Set” buttons are all made of a tactile-rubber and feel really solid. In my experience, tiny buttons have a tendency to rock back and forth when you try to push them, but on the Game & Watch all the face buttons feel like they’re built to stand a lot of abuse.

[poilib element=”quoteBox” parameters=”excerpt=All%20the%20inputs%20are%20of%20a%20much%20higher%20quality%20than%20I%20was%20expecting.”]The D-pad is a classic Nintendo D-pad, although a bit smaller than what you’d find on an original Nintendo controller. It works wonderfully, with no unintended inputs; oftentimes, cheaper D-pads will register an “up” input when I’m moving left or right, but that’s not the case here. It has a great feel to it, with no mushiness at all. In fact, all the inputs are of a much higher quality than I was expecting from a $50 novelty device.

The Super Mario Game & Watch housing is made of red plastic held together by four tri-wing screws. On the right are the power button and USB-C connector for charging, and on the left is a tiny speaker. I was really surprised by just how loud that tiny speaker can go. It also sounds pretty good, even at full volume, although I suspect the 8-bit chiptunes aren’t as impacted as other recorded sounds might be when played on such a small speaker. Adjusting the volume is done via an on-screen menu, as is adjusting screen brightness.

[poilib element=”quoteBox” parameters=”excerpt=The%20screen%20is%20teeny%20but%20it%20looks%20amazing.”]The screen is teeny, measuring 1 ⅜” diagonal (or about 35mm), but it looks amazing. Seriously, I was blown away by just how great it actually looks. Photos don’t do it justice: colors are incredibly vibrant, the graphics are crisp, and there’s no hint of ghosting or blur that I could notice. When you turn the Game & Watch on for the first time, there’s a splash screen of Mario and Luigi art that looks like it’s from the page of a book.

As great as the colors and detail on the screen are, it does have a very narrow viewing angle. Shifting it just a few degrees in my hand drastically changes the colors, and at too high of an angle you can’t really see anything at all. This isn’t a deal breaker, though, since it’s so small it can only really be played staring at it dead-on, and it’s comfortable to hold even while staying in the rigid viewing angle range.

Games, On a Watch

In addition to the two Super Mario Bros games, the Game and Watch contains a version of Ball that is recreated from its original incarnation and looks everything the part of the low-cost, low-powered LCD game it’s based on. Mr. Game and Watch’s head has been replaced with Mario’s beaming visage, but that’s about the only major difference. You “juggle” two, or three, different balls, and earn a point with every successful catch. It’s extremely simple and yet actually a lot of fun.

Super Mario Bros. is… well, you know exactly what it is. Everyone does. The Lost Levels is much less familiar to Westerners, but if you’re the kind of person who’s going to consider buying the Super Mario Bros. Game & Watch then you’re almost certainly the kind of person who once loved regaling everyone with tales of the Doki Doki Panic western conversion into what we call Super Mario 2. You’re aware of the original SMB2, is what I’m saying.
[poilib element=”quoteBox” parameters=”excerpt=The%20screen%20is%20just%20big%20enough%20to%20make%20playing%20on%20it%20an%20utter%20retro%20delight.”]
Both Mario games play surprisingly well on the Game & Watch. In fact, the emulation and controls feel spot-on, and the screen is just big enough to make playing on it an utter retro delight. The fact these games look so great on the tiny screen gives me hope for future hackers to open it up for all NES games, or maybe that Nintendo will give us a Game Boy Classic using the same tech. (Please, Nintendo?)

As far as the Mario games go, these are just straight-up emulations of the NES/Famicom originals. There are no extra features, and the emulator itself is bare-bones. If you’re a filthy cheater who, like me, got accustomed to save states and rewinds from Nintendo Online and other emulators over the years, you’re going to have to earn back your classic gaming card because those quality-of-life/cheater features aren’t here. You can, however, jump out of one game to play the others, check the time, or even power down the Game & Watch, and then start right back up from where you left off. Take THAT, Xbox Quick Resume!

The Secrets of the Watch

When Nintendo originally announced the Game & Watch: Super Mario Bros. edition to celebrate 35 years of Super Mario, it touted it would contain 35 secrets to coincide with the anniversary. Those “secrets” are all in the Watch part of the device, and turn out to be just special animations. The current time is displayed on the screen, spelled out in bricks, and Mario runs across the screen constantly, back and forth, sometimes stomping enemies, sometimes taking hits (but never dying, at least not that I’ve seen). 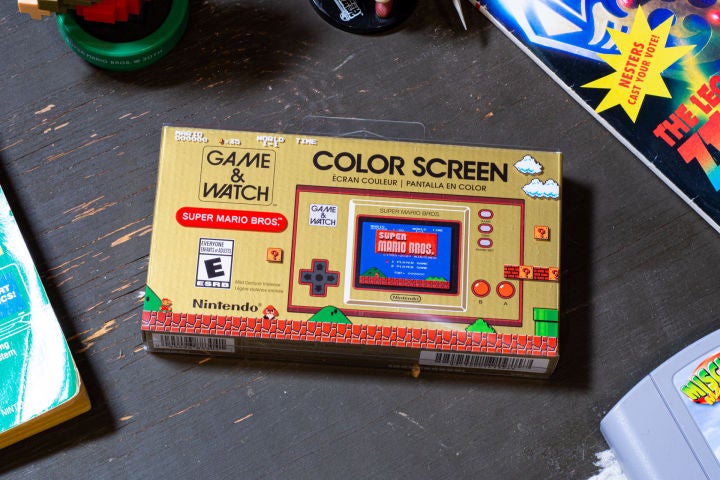 Hitting the “time” button changes the level-type (there are only three: world 1-1 style, world 1-3 and world 4-3). Pushing A and B at the same time causes the digits to cycle from regular brick to golden brick and back again, but those are the only functions I’ve found so far. I did catch a group of Yoshis appearing on the screen and smashing all the bricks to change the hour, and there’s a different “sunset” color scheme for the sky around five o’clock. Yes, I realize I could just go through and change the clock to view more animations, but I am only a cheater when it comes to save-states. I’m not a filthy time-traveler.

Boxed In: Packaging Review for Collectors Who Will Never Open Theirs

This part of the review is about the packaging, because if you’re like me, your plan for the Game & Watch: Super Mario Bros. edition is to display it complete-in-box in and among the rest of the Nintendo stuff you collect. I’m pleased to say the box is excellent.

The cardboard box itself comes in a plastic sleeve, printed on which are various scenes from the 8-bit Mushroom Kingdom. Because the clear plastic has a tiny bit of distance between itself and the cardboard, it gives the graphics an extra bit of 3D pop.

The colors on the plastic are bright and vivid, and the printed graphics are razor-sharp. It’s such a beautiful piece of retail packaging I didn’t want to open it up, but Nintendo was nice enough to make it easy to open without destroying it.

Opening it from the right-hand side of the box, I was delighted to find a pair of Mr. Game and Mario characters hidden inside the tab with a “Special thanks to you!” message. It’s a completely unnecessary addition, but it adds to the already massive amount of charm.

Inside the box it’s not nearly as exciting: there’s a cardboard insert in which the Game & Watch resides, along with a USB-C charging cable and a very ho-hum set of fold-out instructions. It’s a little bit of a let-down, but that feeling quickly faded when my eyes first met the golden luster of the Game & Watch itself.

What The Jojo Rabbit Cast Is Doing Now