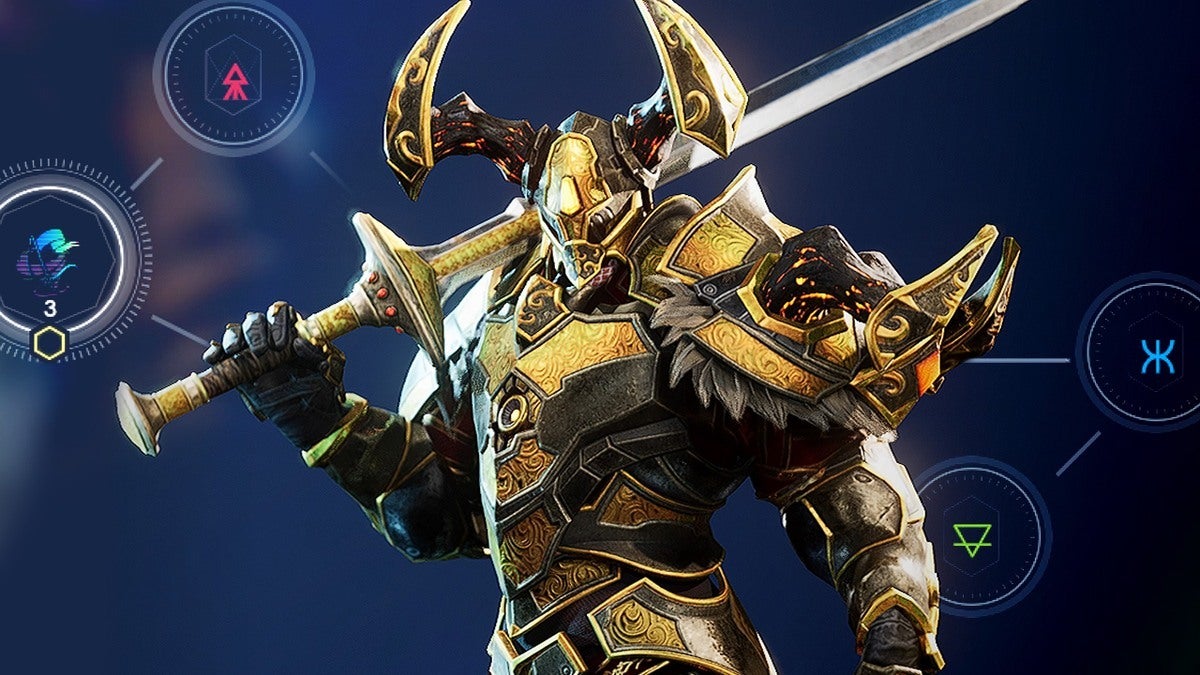 Any good looter game worth its, well, loot, needs to have a solid grasp on its inventory system and customization options. Players need to want to keep looking for more loot, while still finding value in what they’ve already acquired.

And so crafting that loop has been a core ambition for Counterplay Games, the team behind PS5 launch game Godfall, which is coming to Sony’s next-gen console and PC on November 12. Speaking with IGN, senior technical producer Richard Heyne walked us through the philosophy behind Godfall’s loot, the customization options it offers, and the many ways the developers are hoping to let players look good, feel powerful, and want to keep coming back to play more.

Watch the video above for a look at some of Godfall’s customization and UI options, and read on for more on the philosophy and practical application of Counterplay’s work.

As Heyne and I spoke about all the options Godfall has on hand, he used one phrase that best encapsulates the wide array of options players will have — the Godfall team aimed to make it “The Tinkerer’s Dream.”

“We had this idea, we wanted [Godfall] to be the tinkerer’s dream. Anybody who loves to get intimate with their loot and put the pieces together and see the numbers and see the impact immediately, that’s the kind of game we wanted to create,” Heyne said.

And as the team has spent years building that dream, a few of the fundamentals were crystallized early on; namely, that what you acquire should make you look cool.

“At a high level, what’s exciting about Godfall and the way that we’re able to package this progression and this satisfying desire to keep chasing for more was you really have to earn the right to look like a badass,” he said, noting the early character and weapon art really helped the team settle on the look and feel for its expansive loot list.

“…Once we had the visual hierarchy established for the weapons, we were able to think about, ‘Would I chase for this weapon for hours just off visual appeal?’ Not thinking about how it functions or how the player’s going to experience it beyond visuals, but just this visual alone, would I chase this? Is this something that’s that value? Is it worth my time? And once we were able to identify that, that’s when it moved over to our design and gameplay programming.”

But, as Heyne put it, the team wanted to ensure that its loot “wasn’t all flash with no bang,” and the cosmetic appeal was certainly not the only consideration that went into the game’s loot system.

“For us it was all about that satisfaction of how you look in the beginning of Godfall, and how you look at the end. You should be proud of where your character is at the end, and what your arsenal looks like,” Heyne said.

Much of the Counterplay’s general customization and loot philosophy can be seen in the Godfall skill tree design — namely maximum opportunity to tinker and experiment — which you can check out in the video above or the images below.

“We really just wanted there to be maximal flexibility with the skill grid. We wanted to avoid choice paralysis, because Godfall combat can be quick, it can be snappy. It’s action-packed, and if every two levels you’re having to open the UI menu, read each individual skill, decide the best path for you… it wasn’t synonymous with what Godfall is, and it would really hinder the player’s experience,” he explained.

Though players start from any of the four corner nodes on the skill grid, they can respec their builds instantly and “are never married to your choices” for any Valorplate’s skill tree. Skill points carry over from one Valorplate to the next in a universal system so that players don’t have to worry about grinding for levels with each Valorplate, or feel locked in if you decide to, say, drop plenty of points to level up a certain couple of skills.

“You’re constantly able to evolve and change the way that you’re playing. And then when you land on something you like, you lock it in. And then maybe once you switch Valorplates you try to adjust and go from there,” he continued. Heyne noted that the intent isn’t to have players fill out the entire grid by the end of the campaign, but of course can work toward improving on their build in the post-game.

The skill grid is on top of the augment constellation system Counterplay detailed earlier this year, offering yet another way for players to uniquely build out their character builds. But the options don’t stop there.

The Craft of Godfall

Players will be able to outfit their character with different weapon, life stone, ring, charm, amulet, banner, and augment options, all built around a loot searching and inventory system that’s meant to make your hunt always meaningful.

While players will have to go to the forge in the Seventh Sanctum, Godfall’s player hub, to upgrade, but Counterplay is hoping to make the process streamlined. As Heyne described it, “We wanted to make sure this wasn’t cumbersome that you had to run from point A, to point B, to point C, and you spend an hour in the Sanctum before you actually get to a mission.”

You will be able to swap out weapons and other equipment mid-mission, but the process at the Sanctum’s forge should be “streamlined” to let you enchant, upgrade, and overall tweak with ease. And speaking of enchanting and upgrading, as you can see in the images below, players will be able to augment their items a couple of ways — think of upgrading as leveling up your weapon while enchanting is boosting it to the next rarity level. Heyne explained this system came from the idea that “If there was a piece of loot that you really liked and you wanted to use for an extended period of time, we wanted to make sure there was some ability to bring that weapon with you throughout the game.”

Not that Counterplay is expecting players to stick with a single weapon throughout the entirety of Godfall, but with 125 weapon options and the ability to have two in your loadout at any time, the developers realized players may want to gravitate toward particular favorites.

That inventory management also speaks to the ways in which Heyne described Counterplay’s approach of respecting the player’s time at all points. Speaking about the ability to craft other Valorplates offered a good example of the team’s approach to a meaningful loot system in this way.

“So you’re not being told, ‘Hey, you have to go do this side mission to unlock Mesa the Valorplate.’ You should be able to probably get enough crafting materials for a handful of those throughout the campaign itself, and then if there are any [items needed for the others]… you should have a list of activities to pick from, be able to choose what you want and to fill out those last pieces of your armory without feeling slowed down.”

That philosophy of wanting players to have their time feel respected, and to make the rewards for that time spent meaningful, means Counterplay is hoping to make every aspect of your build valuable. While the studio has showcased or discussed Valorplates, Weapons, augments, and more before, Heyne spoke to Trinkets, a suite of loot players will be able to assign to their character build.

“Trinkets should be adding that last final touch. They’re unique pieces of loot in the sense that they’re not visual the same way that weapons are. You don’t see the trinkets that you have equipped… but they have these unique traits that closely tie into the various archetypes that you can explore within Godfall. And the right Trinket put into the right build is really what is supposed to round it out and bring that build together.”

And whatever aspects of your character’s build you choose to focus on at any one time, Counterplay is hoping Godfall’s combination of menu management, in-game experimenting, and loot collection all feeds into a satisfying loop that doesn’t hinder players from how they want to fight — and how cool they want to look while doing it.

“One of our core philosophies will always be the tinkerer’s dream. If there’s the appetite for that, for the player to continue experimenting, we want to just make sure that the playground’s open and you’re ready to play,” Heyne said.

Disneyland And Other Theme Parks Might Sue California Over Reopening

Thu Oct 22 , 2020
The mouse and his friends may be looking to legal action to reopen theme parks. Source link