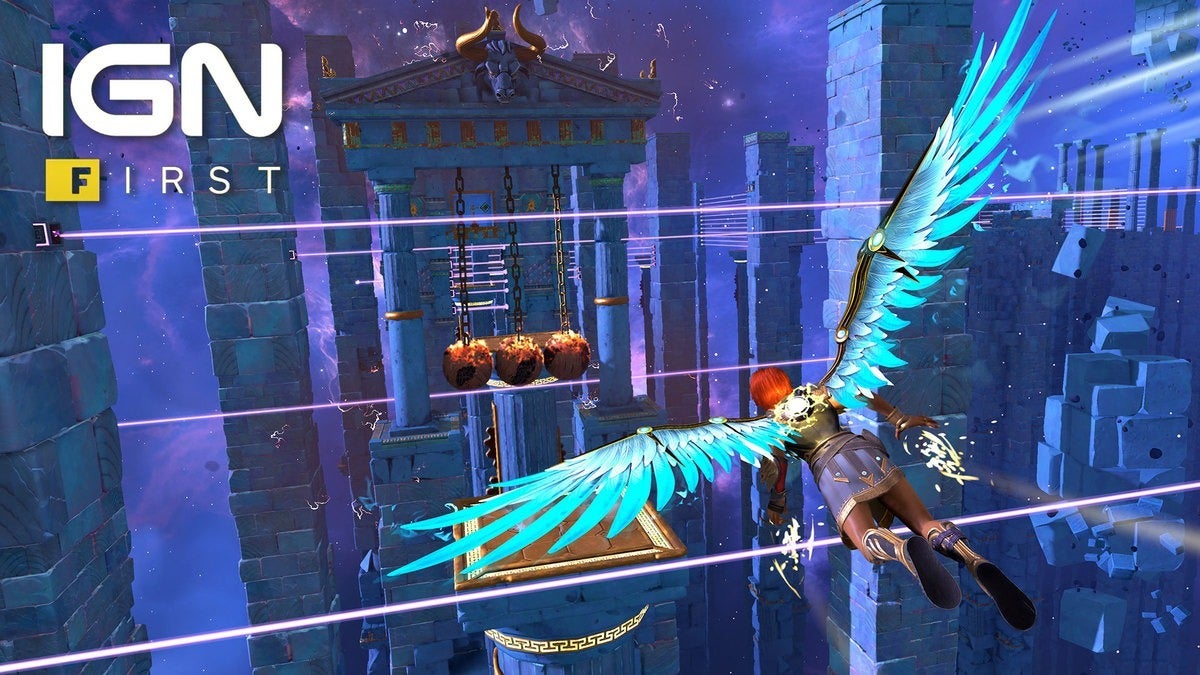 As Immortals Fenyx Rising’s original title, Gods and Monsters, suggested, Ubisoft Quebec’s open-world game involves slaying a few enemies. But Fenyx’s adventures are as much about solving intricate puzzles as they are about defeating the beasts unleashed on the world by the evil Typhon.

“Puzzle solving was very important to us, because it’s a nice pace-breaker in between the intensity of combat and exploration,” explains Julien Galloudec, associate game director. “It’s a good way to slow down a bit and give another challenge to the player, and also to challenge a lot of different skills. It can be logic, it can be memory, it can be observation and manipulation of the environment.”

The Golden Isle is littered with numerous puzzles, from small problems with one-step resolutions, to grand enigmas that you’ll revisit multiple times in hunt for its final solution. But, at least from my few hours with the game so far, Immortals’ most fascinating puzzles can be found inside the Vaults of Tartaros.

“A Vault is a small location taking place in Tartaros, the underworld of the Greek world,” Galloudec reveals. “It used to be the prison for Typhon. After breaking free, he used that former prison as a vault for the power of Zeus that he stole and sealed away. He made sure to make them full of traps and challenges to keep intruders away from this power of Zeus, and make sure no one can recover them.”

Those traps and challenges come in a variety of forms, from combat arenas and traversal problems to physics-based puzzles and tests of logical thinking. If this all sounds a little familiar, it’s because they share much in common with the fantastic shrines in The Legend of Zelda: Breath of the Wild. It’ll come of no surprise, then, that Nintendo’s masterpiece was an influence on Immortals, along with other highly-regarded puzzlers.

[poilib element=”quoteBox” parameters=”excerpt=%22We%20have%20around%2060%20different%20Vaults%20in%20the%20world.%20They%20are%20all%20unique.%22″]“We looked at many games: Portal, World of Goo, Zelda: Breath of the Wild,” Galloudec says. “We looked at a lot of different games and how you can build those puzzles. And then we started to iterate on all of that. We actually did prototype for maybe double the amount of Vaults you have within the world at the end.”

“We have around 60 different Vaults in the world,” he says. “They are all unique. We also have some very epic and special ones that we haven’t shown yet.”

Immortals has a jovial sense of humour, largely delivered by its fourth wall-breaking narrators, Zeus and Prometheus. That comedic approach provided the design team with some extra creative license. “We have many references to things that are quite modern and we are allowed to do that because it’s right within the tone of the game,” says Galloudec.

This means that the Vaults don’t have to be serious labyrinths based on historic Greek architecture. The best example of this that we’ve seen so far is a Vault that has you playing a gigantic game of pinball.

“It’s literally a huge pinball machine that is in front of you,” says Galloudec. “There is a lever that launches a boulder onto the pinball machine, and then you have those two buttons that activate the bumpers. After a couple of tries, you see that the boulder is on fire and that you have some wooden crates, so that’s going to burn that contact. And then after that, you understand that there is a hole in the middle of the pinball [machine] that you need to burn and put the boulder there.

“That first step is very simple, but quite impressive because you have that huge pinball structure in front of you in the middle of the cosmic void,” he adds. “So it’s surprising at first and pretty exotic.”

The pinball challenge isn’t the only Vault that brings ideas from the modern world and reinvents them in the form of a Greek-era puzzle. “We have one that we call The Factory,” Galloudec reveals. “When you enter, it’s like a lot of different conveyor belts. It’s a moving platform going in circles, in different circuits. And then you understand that by shooting at some targets, you can change the way [they move] and that you have to bring some cubes to a destination.”

And then – as if Ubisoft Quebec had been able to predict that Fall Guys would take the world by storm – there’s a Vault based on Japanese game show Brain Wall. “We have another one that is inspired by the famous Japanese TV show,” Galloudec says. “We have a wall that is coming toward you, and you have to jump into the right shape.”

Of course, Immortals doesn’t ask you to complete its Vaults just for the fun of it. Solving these underworld mysteries rewards you with a sample of The Golden Isle’s most precious resource.

“At the end of a Vault, you have a lightning bolt of Zeus,” says Galloudec. “That’s part of Zeus’s power, and you can use that to increase the stamina of your character. Stamina is a very important resource in the game because the more you have, the more you can do cool stuff like special abilities.”

“And on top of that, each Vault has a secret chest that can be hidden or that can be gated by a special challenge,” he adds. “And those chests contain a lot of cool stuff that’s going to boost your progression.

“There is some armor that can only be found in special chests in the Vaults,” he reveals. “And there is also some armor that is dedicated to the Vaults in terms of perks, so you’re going to do more damage or have more stamina now while you are within a Vault.”

[poilib element=”quoteBox” parameters=”excerpt=%E2%80%9CWe%20had%20to%20accept%20that%20%5Bplayers%20are%5D%20going%20to%20break%20the%20game%20and%20we%20have%20to%20embrace%20that.%22″]Acquiring these rewards obviously demands you solve the Vault’s puzzle, but players will discover that there’s more than one way to master them. Part of this comes down to the fact that, because you’re free to explore The Golden Isle in any order you like, there’s no way to predict how powerful Fenyx will be when they reach a Vault. One player’s first Vault could be another player’s last, and so some players will have very few abilities, while others will bring many tools in with them that can unlock new solutions.

“We had to accept that [players are] going to break the game and we have to embrace that,” says Galloudec. “And as soon as we embraced that, we were much more comfortable with the fact that yes, a player that has that and that ability, that with full stamina they’re going to bypass all of that. But it’s going to be fun to do for him, because it’s still a cool navigation puzzle and a cool way to use these abilities that he earned in the game by upgrading.”

We’ll be able to explore and conquer all of the Vaults of Tartaros when Immortals Fenyx Rising releases on December 3. For more, check out our hands-on preview and our chat with game director Scott Phillips about the game’s journey from Assassin’s Creed and Gods & Monsters. Immortals Fenyx Rising is our IGN First for September, so keep checking back for more exclusive interviews and details.