Following the outcry that followed unskippable ads being added into loading screens in NBA 2K21, 2K has stated that the ads were “not meant to run as part of the pre-game introduction” and this issue “will be fixed in future episodes.”

Last weekend, owners of NBA 2K21 noticed that unskippable ads for the Oculus Quest 2 were appearing during pre-game – ads that weren’t there at launch – and they wouldn’t even let you edit your lineups while they were running.

NBA 2K21’s Twitter account responded to the controversy, saying that while ads have been previously integrated into 2KTV segments, they were not meant to run as part of the pre-game introduction. 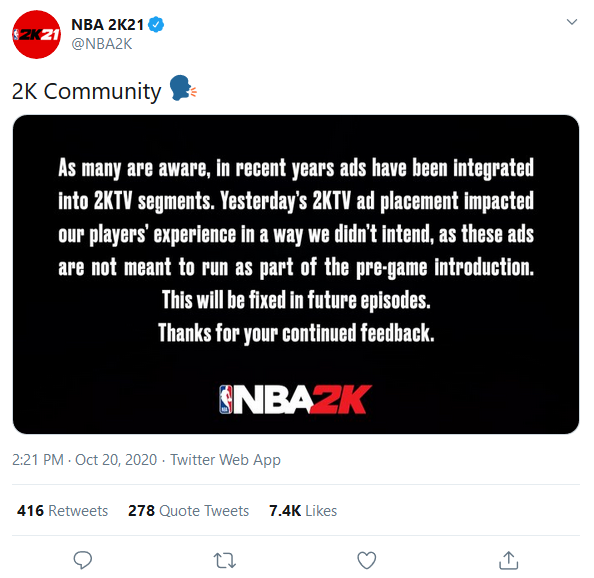 “As many are aware, in recent years ads have been integrated into 2KTV segments,” The statement reads. “Yesterday’s 2KTV ad placement impacted our players’ experience in a way we didn’t intend, as these ads are not meant to run as part of the pre-game introduction. This will be fixed in future episodes. Thanks for your continued feedback.”

Many were upset that these ads were occurring in a game that is retailing at full-price, and this issue was very similar to what occurred in UFC 4, which also added advertisements weeks after release.

These intrusive advertisements add to the frustration many feel around the NBA 2K series, which also has, as our review put it, a “persistent addiction to obnoxious microtransactions.”

One Scene That's Definitely Inaccurate About Maverick In Top Gun, According To An Expert