The Pathless, the second game from Abzu developer Giant Squid, is an ambitious step forward for the studio — alongside being a PS5 launch game, it’s the first open-world game for Giant Squid, one that’s both inspired by the genre’s best while also hoping to subvert some open-world norms to better immerse the player in its beautiful, mysterious island setting.

And while its open-world trappings are certainly worth diving into, one of its most interesting choices is in its main gameplay hook — it’s a game in which a bow and arrow is your main weapon, but you don’t have to worry about aiming all that much. It’s a strange idea in concept, but one that works from my time watching Giant Squid’s Matt Nava demo the game and my own hands-on time with it.

May Your Aim Be True

Taking on the role of the Hunter, players navigate The Pathless’ open-world on foot, or by gliding through the air with a newly met eagle companion. And sure, you could plod along at your basic running speed, but all throughout the island are these red, diamond-shaped markers floating in the air. Hit them and your boost meter – present at the bottom of the screen – will start to fill up.

You can drain this meter to launch yourself into a smooth, speedy sprint, shooting down other markers as you go to keep your bar from totally depleting and, more importantly, keep your momentum up.

Rather than aiming it’s all about timing — hit a marker as you’re running to continue your boost, then jump, shoot another marker, and use the momentum from that shot to glide further than if you had just initiated it from standing still. Timing is the main concern — you can see a meter fill up around the marker as you hold the right trigger down to shoot. If you release at the halfway point, you actually get more bang for your bow.

The Hunter’s base walking speed is relatively slow, so you’re going to want to shoot down any of the plentiful markers regardless, but even without the need for speed, Giant Squid’s sense of movement could make for something really special. In the closest approximation to playing as The Flash in a video game, The Hunter’s dash offers a sense of graceful, smooth movement I’ve rarely seen, letting you cover vast distances in short order. And without needing to really worry about aiming — if your generously zoomed out camera spots a marker, it will automatically be highlighted — that lets you put all your focus on the Hunter’s path. It’s enthralling to chain together marker hits, all without worrying about precise aiming, so that you can run, jump, and glide with both style and precision.

And The Pathless’ island encourages natural exploration, so you’ll want to be as mobile as possible. It takes a cue from IGN 2012 Game of the Year winner Journey, of which Giant Squid’s founder is its art director. Like in that game, which saw players collecting scarf pieces to glide for longer periods of time, The Pathless’ eagle has a limited number of flaps that can be increased so players can reach greater heights. Flaps, which recharge once the player touches the ground, are the key to scaling some of the world’s most notable landmarks, which are often quite high up. 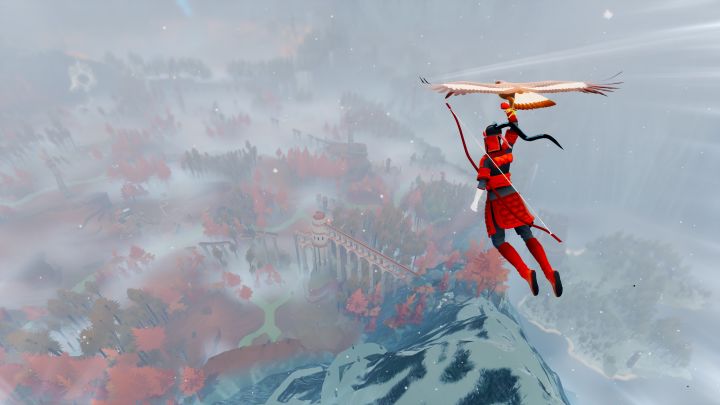 <The eagle is not only the key to pulling off some cool maneuvers while running around, but also a companion The Pathless finds smart ways to make you care about. In addition to its adorable hops as you walk slowly or its graceful glide alongside as you run, the bird can also dutifully and smartly help solve puzzles. And, most importantly, you’ll need to protect it. If you’re ever caught in the roaming storm of darkness around the island, you’ll have to engage in a quick stealth sequence to recover your bird, who will have been battered by the evil smoke swirling around you. After completing these stealth portions, your bird will still be injured, and the only way to cure it is to pet it, showering it with affection and wiping away any remains of the encroaching evil. To gain more of them, players must collect golden treasures scattered throughout the world. Some are just out there for you to see, but many are hidden in environmental puzzles dotting the landscape. Players need to keep an eye out for these, as they’re often embedded in the dilapidated structures and crumbling buildings. In one example, the player can scale a building that stands a few stories tall, and notice that, from the top, you can shoot an arrow through three or four hoops from the top, all the way to the building’s floor. Pull the move off, and you’re rewarded with treasure.

Additional flaps aren’t always necessary to reach a location — the right combination of jumps, arrow markers, and glides can be used in combination to reach certain spots. But they’ll require you to really get in the groove of The Pathless’ flow, an almost zen-like experience as you master its arrow timing.

An Island of Secrets

The Pathless’ island is separated into a series of locations, each with their own secrets to uncover along your main goal of curing the island of an infectious darkness spreading across the land. The Breath of the Wild comparisons are undeniable, with the bright red and black smoke that portends a foe’s arrival looking quite close to Hyrule’s Ganon plague. And, much like the beloved Zelda outing, if you see a tall monument in the distance, it’s probably a safe bet you can and need to reach it.

But rather than relying on any sort of map as a guidepost, Giant Squid wants to keep you present on the island. There’s no map whatsoever to guide your way, requiring you to become familiar with the landscape, learn where its points of interest are, and find the best, or most fun, paths to get from one to the next.

That lack of a map makes the entire journey one of discovery, familiarization, and eventually mastery. Though I’ve only spent time in the world’s first region, the Forest Plateau, it’s a sizable area full of hidden secrets that I’ve still been discovering long after I finished its main objective of dispelling the darkness from several landmarks and, eventually, from the now-possessed spirit watching over this region. I was wary that the lack of a map would mean I’d be losing my way when first exploring or, after some time, accidentally revisiting treasure locations I already completed thinking they were something new. Both those problems, at least in this one region, disappeared relatively quickly.

In regard to losing my way, momentum markers are often placed in plentiful and specific paths to allow you to keep your speed naturally flowing in the direction of an important landmark. And the ability to don a spirit mask at any time – which lets you see an ethereal version of the world – is both great for before and after you’ve visited important locations. Pinging the world around you with an echo-location-esque view, important areas controlled by the evil force pulse in red and cleared landmarks in blue. Flipping in and out of this Assassin’s Creed Eagle vision-like mode is a quick button press that always allowed me to find my way or, in some of my favorite moments, turn in a direction I had never been before to see what extra treasures may be in hiding.

My playthrough of the area culminated in a unique boss battle that was part epic chase scene and part pattern-based battle. The stampeding, Godslayer-controlled elk that watched over this domain gave chase, shooting swarms of fireballs my way and sending out shockwaves of flames as I sped, swerved, and slid toward it, shooting at a few markers on either side of its hulking body. Eventually, we made our way to an arena with a more typical boss battle, waiting to attack at the right moment while dodging out of the way of attacks. But what the battle itself lacked in familiarity it made up for in pure tension, as I used the scant amount of my dash meter I’d gain after each attack to hopefully stay alive.

Clearing the plateau of evil, I can’t wait to embark on a journey to the island’s other regions. The Pathless’ opening area seemingly answered every concern I had with smart answers that only informed its sense of movement, exploration, and mystery. I’m curious to see where the rest of Giant Squid’s new journey takes me, both in the path the developers have carved for me and in the pathless expanse of the island waiting to be discovered.

Dawn Of The Dead: 10 Behind-The-Scenes Facts About George A. Romero's Horror Classic

Thu Oct 8 , 2020
When there’s no more room in hell, the dead will get wasted and crash a golf cart in a shopping mall? Source link