I’m huddled up inside a rickety old attic somewhere in the farmlands of Verdansk. The crack of sniper fire echos through the lumber yard to the north, taunting me. There’s nothing but a half-mile of dirt and grass between me and the next safe zone. Short version: This is where I live now. Then the pitter-patter of boots beneath me. Without even realizing it, I’ve pivoted my tepid little shotgun towards the stairs, listening for the boots to move from the soft dirt to the brittle wood. Two roarings blasts later, I’m somehow still alive. With my position given away to anyone within 100 yards, it won’t be for long.

Whether it’s in the sprawling Warzone or the tighter confines of a deathmatch, Call of Duty has always let players absorb the sights and sounds of chaos. With everyone’s eyes on how flashy a next-gen Call of Duty will look, it’s easy to forget how audio can truly plant you in the middle of a gunfight or under the shadow of an artillery shell. Even as Treyarch looks back to the early 80’s — complete with its pervasive Reaganism, analog toys, and Robert Redford hairstyles — for its thematic inspiration for Call of Duty: Black Ops – Cold War, its team of sound designers and engineers is equally excited for what next-gen consoles are bringing to the mixing table. 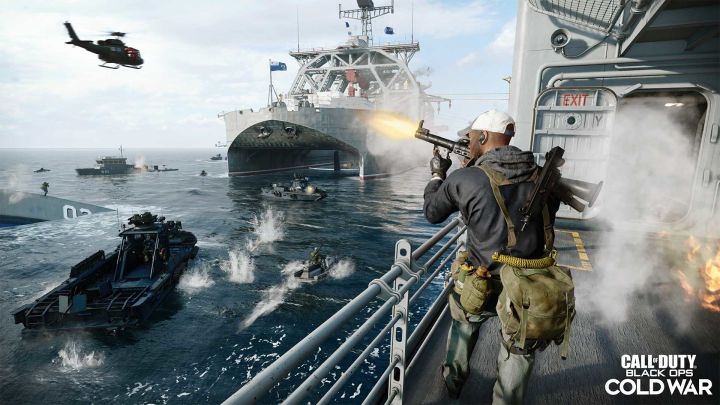 Of course, one of the most universal experiences in Call of Duty is wading into the middle of a firefight and being shot from multiple directions. Thankfully, the Tempest 3D audio capabilities of the PlayStation 5 are introducing new features that can greatly influence how you’ll instinctually react. Meanwhile, the Xbox Series X and S are shipping with Dolby Atmos support, which adds overhead audio channels.

“We kind of started really early on thinking, ‘How do we improve the player feedback loop? How do we get better directionality, better distance so you can tell how far away people are? How do we let the player know that he’s in danger?’” Treyarch audio director  Brian Tuey says. “Because in the past, we’ve had gunshots, but, other than being panned a certain direction, you haven’t really known if that gun is aimed at you. So we’ve built systems to sort of give us the ability to do that.”

To that end, Treyarch relied on fully integrated 3D audio spatialization (rather than 5.1 or 7.1 surround sound to direct players to enemies who aren’t necessarily physically closest to you, but are active threats.

“So there’s a sense of up and down and enemies all around you,” Bitoni says.

One new audio feature that significantly assists players is the threat priority system, which emphasizes the sound of enemies who are actively aiming and firing at you, even from a distance. The threat system uses information to decide distance and volume to prioritize the sound of an enemy’s fire, and it’s all angled towards the player’s ears.

“So if the guy is shooting away from you, he’s going to be normal priority, but if he’s aiming at you, he gets a priority boost,” Bitoni says. “So if you have an enemy that’s close by, but not aiming at you, the guy who’s aiming at you gets higher priority. So if we do have a voice limit count, and we have to cull voices for tech reasons, it will cull the guy who’s not your main threat and that’s the core of what the threat system does. It’s very simple, but we’ve found it super effective. We’re not dropping those events anymore.” 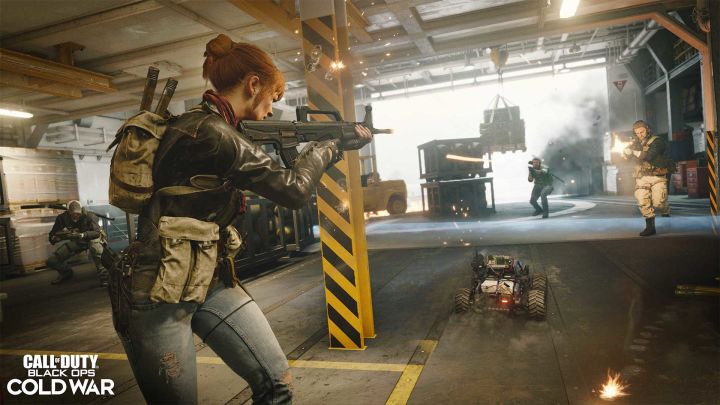 Treyarch has also managed to develop an audio system that brightens the sound of a gunshot the closer an enemy is aiming at you. In addition to that, Treyarch is bringing back bullet crack audio — that supersonic echo of a gunshot usually associated with sniper fire — with some significant improvements.

“So bullet crack now on any unsuppressed weapon is on every shot, but it only triggers if the bullet’s getting super close to you,” Bitoni says. “When that goes off, it’s one of the loudest sounds in the game. It’s a big crack sound, and it happens on every shot so you know this guy’s aiming at me. So, if you do have a situation where there’s a bunch of people fighting, and one of them happens to aim at you, you’re going to know it.”

On another front, both the PlayStation 5 and Xbox Series X utilize HRTF (head-related transfer function) technology to simulate how audio is impacted by the unique shape of your ear, head, and torso. Using a set of functions and algorithms, HRTF effectively mimics the way your ear would perceive 3D sound sources around you. Depending on where a gunshot, vehicle, or footstep comes from, it understandably hits different obstacles and acoustic alterations before reaching your eardrum. It’s a major reason why you can tell where a sound is coming from even if your eyes are closed.

“Attempts at this have been done in the past that sort of make a best guess for how to do that, but everybody’s head shape is different” Bitoni says. “So it’s very perceptive, and a lot of people just haven’t really been impressed with the technologies of the past that supported this, but on next gen it truly shines, especially [on PlayStation 5].

Bitoni gives an example of hearing a UAV drone, which reveals your team’s or enemy’s position on radar, flying overhead in a multiplayer match. Previously, players would receive more flat audio, meaning they’d probably have to scan the sky to find it. Now, players will have a much more clear indication.

Bitoni adds that even PS5 players using cheaper headphones or earbuds (which typically use two audio channels) will get a better 3D audio experience, thanks to 16 channels of 3D audio processed through HRTF algorithms.

Call of Duty players, especially those exploring through the ruins of Verdansk in Warzone, are no strangers to rushing through and around buildings as chaos rains all around. Tuey says he’s excited for a new acoustical simulation that gives Cold War a value called “outdoorness.” Put simply, audio is altered not only by whether you’re indoors or outdoors, but the shape and composition of the structure you’re entering.

“So as I approach the building, I start becoming more indoor because the walls are getting closer to me as I’m firing, and so now I’m starting to blend the inside and the outside” Tuey says. “The same kind of thing can happen in an alleyway where you don’t have a roof, but you have close walls. It will change the sound of the gun based on how close the walls are and they get calculations back for how much reverb it should be, how much delay there should be, and then how much of the two different layers or blends are going to play back.”

Call of Duty will always find new ways to improve how much its metal shines and dust settles, but audio has always been the truest wizardry. It’s what makes a quad-kill bombing run so satisfying, or a narrow miss from an enemy sniper so terrifying. As players plug their headphones and soundbars into their PS5s and Xbox Series X’s this month, they’ll finally understand what magic Treyarch and every other developer out there is working with, and they’ll do it with a bang.

Joseph Knoop is a writer/producer/content operative for IGN. Ascend from darkness with him on Twitter.

We Finally Know When Tenet’s Coming To Homes

Thu Nov 5 , 2020
Christopher Nolan’s latest movie will soon be available to watch in the comfort of your own home. Source link